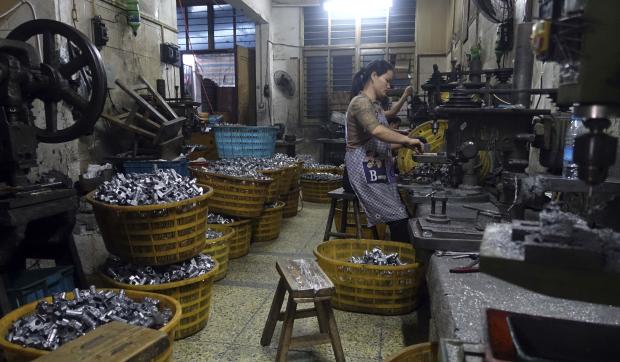 In this photo, taken Wednesday, Oct. 21, 2015, a worker manufactures metal parts in an auto parts factory in Rui’an near Wenzhou city in eastern China’s Zhejiang province. Chinese exporters of goods from electronics to motorcycle parts are scrambling to insulate themselves from US President Donald Trump’s proposed tariff hike. They are weighing plans to rush shipments to American customers ahead of the increase, raise prices or find other markets. Some are looking at shipping goods through other countries to hide their Chinese origin. (Photo by ERIKA KINETZ / AP)

Cecilia Malmstrom, the European Union’s trade commissioner, also said the bloc would not offer any concessions in order to be exempt from the US import duties ahead of a May 1 deadline in talks.

“We are a seeing a recovery and a potential growth in trade and global growth but it is threatened by these tariffs,” she told reporters in Strasbourg, France. “We can see already tendencies of distortion of trade that affects the EU as well.”

Last month, US President Donald Trump slapped tariffs of 25 percent on steel imports and 10 percent on imported aluminum, but granted the EU a temporary exemption until May 1. He also temporarily exempted big steel producers Canada and Mexico – provided they agree to renegotiate a North American trade deal to his satisfaction.

The EU has drawn up a list of “rebalancing” duties worth some €2.8 billion ($3.4 billion) to slap on US products if it is not permanently excluded.

Describing the US tariffs as “pure protectionism,” Malmstrom said the EU would not be strong-armed into giving up any sweeteners in exchange for a permanent exemption, amid rumors that Brussels might be preparing some kind of trade offer.

“We have not offered the US anything. We are not going to offer them anything to get exceptions from tariffs that we consider are not in compliance with the WTO,” she said, referring to global trade’s governing body, the World Trade Organization.

“We expect to be permanently and unconditionally exempted from these measures,” said Malmstrom. She added that talks with Washington are continuing but that the EU has received no guarantees yet.

Malmstrom also expressed concern about trade tensions between the US and China, describing a possible escalation as “something that could be very worrisome for the global economy.”

Her remarks came as the European Commission announced that it had wrapped up negotiations with Japan and Singapore on major trade and investment deals and that it hoped the new pacts can be endorsed by EU countries and enter force by late next year.

EU Commission Vice President Jyrki Katainen hailed them as a victory for rules-based trade and the multilateral system.

“It’s always worrisome if any of our partners are willing to take unilateral action against us, or against any of us,” he said, but he noted that “support for multilateralism has strengthened recently because of unilateral actions.”

Tony Labrusca responds to being told ‘you’re so gay’