Cigarette smuggling on the rise 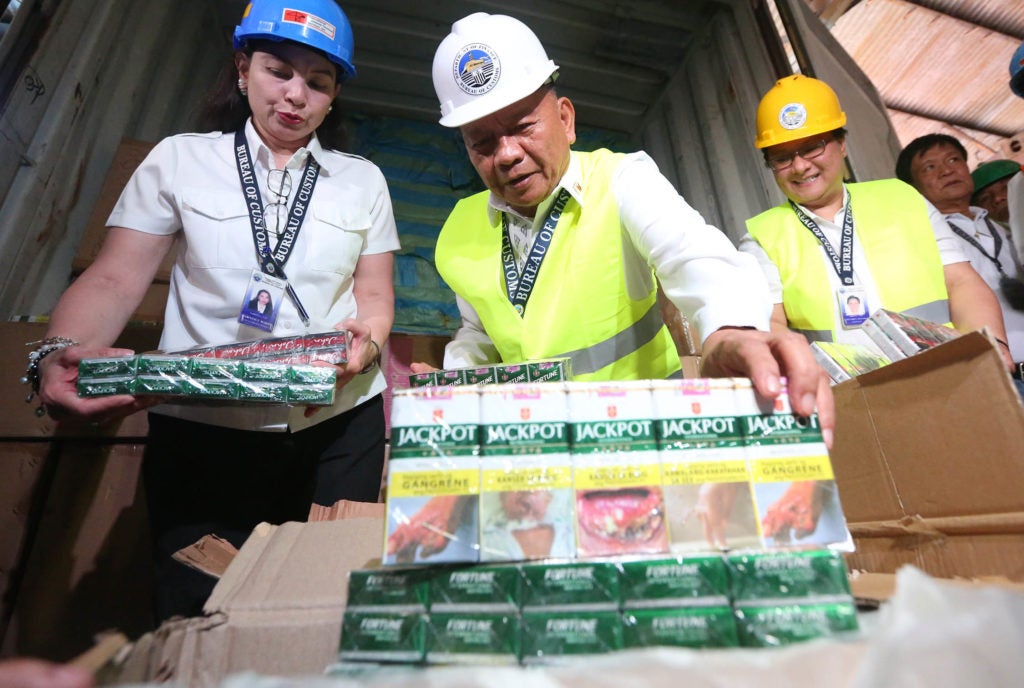 Cigarette smuggling is on the rise partly due to higher prices as a result of increased excise taxes under the first tax reform package, Internal Revenue Commissioner Caesar R. Dulay said Monday.

The Bureau of Customs also on Monday reported that it intercepted last week P18.5 million worth of fake cigarettes from China.

“Frankly, we have a proliferation of smuggling. So we created a task force to address that because our attention was called by big tobacco companies, Philip Morris and Japan Tobacco, that based on their investigation there are many smuggled cigarettes,” Dulay told reporters.

Although he could not give the exact volume of allegedly illicit cigarettes entering the country, the BIR chief said it was “substantial because the tobacco companies were complaining.”

“We also have feedback that there are some manufacturers in the provinces producing fake cigarettes; in fact, the NBI [National Bureau of Investigation] and the police have conducted some raids,” Dulay added, citing those recently uncovered in Bulacan and Nueva Ecija.

The BIR chief admitted that smuggling became rampant after the government raised the excise tax slapped on cigarettes under the Tax Reform for Acceleration and Inclusion (TRAIN) Act.

“Those cigarette packs without stamps are P32 less in the market. A pack of legitimate cigarettes will cost P60-65. So those [smuggled or fakes] without stamps, they can sell them for P30 or half the price. So which will smokers buy? The cheaper cigarettes. That’s the effect,” Dulay explained.

Dulay nonetheless warned that those found bringing in illicit cigarettes would be slapped smuggling and tax evasion cases.

As for the 40-foot container intercepted at the Manila International Container Port last week, the BOC said the shipment was initially declared as 890 cartons of industrial artificial fur texture, but turned out to be 914 cartons of fake cigarettes.

Customs Commissioner Isidro S. Lapeña said the ruse was discovered during a routine X-ray examination. “This is our usual process. We do an X-ray to check the contents. Our technicians noted a discrepancy, so the shipment became the subject of an alert,” Lapeña told a press conference.

In a statement, the BOC said the shipment was consigned to the Marid Industrial Marketing in Paco, Manila, and was processed by customs broker Carme Ann Rollon.

The BOC consulted with a technical expert, who noted that the serial numbers of the cigarette packs were the same, hence the cigarettes were fakes.

The intercepted shipment will undergo seizure and forfeiture proceedings for violating RA 10863 or the Customs Modernization and Tariff Act.

Meanwhile, the accreditation of the importer and customs broker will be revoked or suspended accordingly, Lapeña added.

He also warned the public to be cautious in smoking counterfeit cigarettes as these might be more harmful to the health because of the unknown ingredients and chemicals in them.