PSEI tries to cling to once familiar 8,000 mark 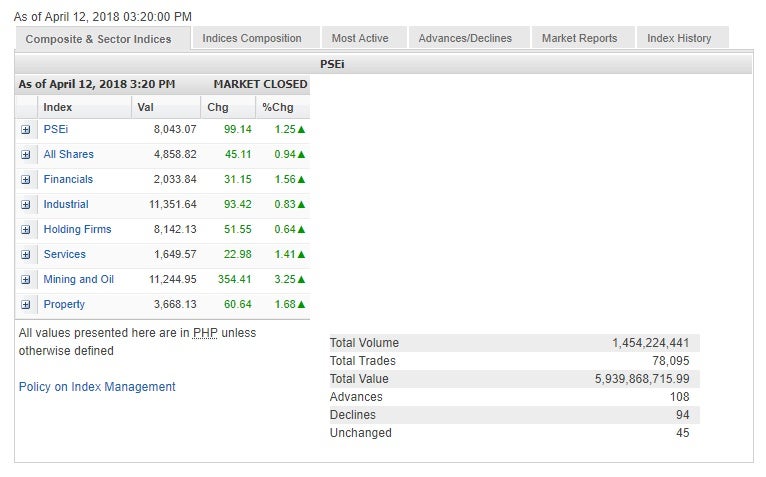 Defying the downturn across regional markets, the local stock barometer retested the 8,000 mark on Thursday as foreign investors started picking up large-cap stocks.

Elsewhere in the region, stock markets mostly faltered on fresh geopolitical tension in the Middle East alongside worries on the US Federal Reserve’s increasing bias for monetary tightening.

“In terms of technicals, 8,050 remains to be a formidable level to beat,” Papa Securities said.

“Momentum as shown by RSI (relative strength index) also remains weak and until any major development, the PSEi looks set to remain in its trading range between 7,834 and 8,050,” the brokerage said.

All counters firmed up, led by the mining/oil counter which surged by 3.25 percent. The financial, services and property sub-indices all gained over 1 percent.

There were 108 advancers that edged out 94 decliners, while 45 stocks were unchanged.

The PSEi was led higher by BPI, which surged by 5 percent, while SM Prime racked up 3.45 percent.

PLDT jumped by 2.76 percent while Ayala Corp., BDO, AGI and GT Capital all added over 1 percent.

Outside the PSEi, one notable gainer was Bloomberry, which surged by 7 percent. The integrated gaming resort developer and operator is raising P73.5 billion, partly to be able to lock ownership on the 16-hectare area where Solaire stands on.

Vista Land and Now Corp. both added over 1 percent while LR gained 0.6 percent.

On the other hand, Metrobank, JG Summit, Security Bank and Metro Pacific all slipped.