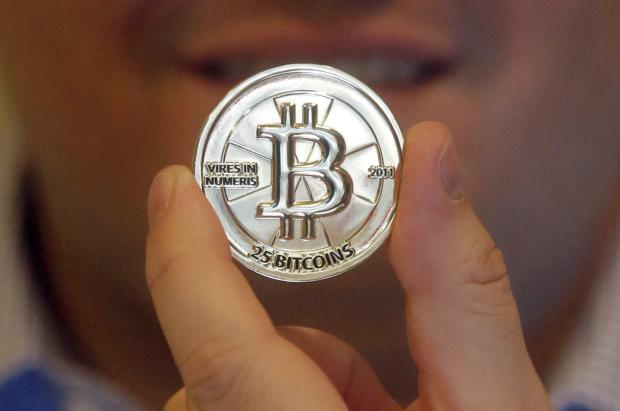 In this photo, taken April 3, 2013, a man holds a token bearing the Bitcoin symbol at his shop in Sandy, Utah. (Photo by RICK BOWMER / AP)

The Philippine National Police (PNP) announced on Tuesday the fall of a couple who had scammed dozens of investors into investing in a firm supposedly dealing in Bitcoin, amassing at least P900 million from their victims.

Because of the worldwide hype over Bitcoin, scammers find it easier to lure unwitting investors.

In this case, the couple, identified as Arnel and Leonady Ordonio, lured some 50 investors to invest in NewG, which they claimed as a Bitcoin investment company, promising up to 30 percent cashback in 16 days, according to Director Roel Obusan, chief of the PNP Criminal Investigation and Detection Group (CIDG).

Obusan said the Ordonios, while claiming to invest the money in Bitcoins, were not in any way connected to the cryptocurrency.

But what is Bitcoin?

Released in 2009, Bitcoin is a payment system and digital cash designed to be secure and often anonymous.

According to its website, Bitcoin is the world’s first completely decentralized peer-to-peer digital currency. And unlike currencies in the conventional banking system, Bitcoin works without a central bank or system administrator and transactions are usually priced for a minimal fee, or most of the time, for free.

It was developed by a certain Satoshi Nakamoto, whose real identity remains unknown to this day.

Bitcoin is the largest form of cryptocurrency, a medium of exchange that uses cryptography to make transactions extremely secure. While it remains as a relatively new phenomenon, more and more people, establishments, and firms use bitcoins to buy and sell products and services.

Bitcoins, according to its website, can be bought or sold through “Bitcoin exchanges” via different currencies or mined by computers solving complex arithmetic problems.

What made the currency so popular was the meteoric rise of its value – from $963 per bitcoin in January last year to around $19,000 in December.

Its volatility is based on the fact that nobody runs the currency, unlike real-life money like the Philippine peso, which is managed by the Bangko Sentral ng Pilipinas.

The police have yet to find out where the money went, whether it was indeed used to buy the digital currency.

But one thing is for sure, the police did not promise if the victims could get their millions of investment back. /atm