Are we in a bear market? Should I sell my stocks now? | Inquirer Business
Close
menu
search

Are we in a bear market? Should I sell my stocks now?

The answer to this question dictates what we should do given current market conditions. If we are in a bear market, we should sell all our stocks as we can expect even larger drops going forward that could last for a prolonged period of time. If, on the other hand, we are merely suffering from a major correction, we should already prepare to accumulate stocks as the magnitude of the current drop is becoming significant enough and a recovery can be expected in a shorter amount of time.

One of the reasons why we think that we are just suffering from a major correction and not a bear market is the fact that only two things have changed domestically compared to the start of the year when there was much excitement about the stock market:

The peso weakened substantially. The peso is now 4-percent weaker compared to its end December level due to the Philippines’ current-account position, which changed from a surplus to a deficit.

Despite the higher-than-expected inflation and the weaker peso, the BSP did not do anything to address these problems. This raised concerns that inflation would go out of control and that the peso would continue to weaken. And since the PSEi was not exactly cheap at its peak of 9,058, these concerns gave investors a reason to sell their stocks and stay on the sidelines, triggering the ongoing correction.

However, higher inflation and the weaker peso are not enough to cause a bear market.

The main reason for the higher inflation this year is the passage of the tax reform program, which led to the implementation of new or higher excise taxes on several consumer products such as oil, sugary drinks, cigarettes and automobiles. If we look at the breakdown of inflation for the first two months of the year, there are no clear signs that the impact of higher oil prices is trickling down to other consumer products. Most of the increase in inflation is isolated to food, beverages, tobacco, transport, and restaurants and miscellaneous goods and services, products which are affected by new or higher excise taxes.

This is the main reason why the BSP decided to keep rates unchanged despite the higher-than-expected inflation for the months of January and February. In fact, there is a good chance that inflation will go down next year as the increase in excise taxes will be limited to oil products in 2019 and the increase will be smaller relative to 2018.

Concerns that inflation will go out of control should be alleviated assuming that inflation falls back below 4 percent sometime in the later part of the year. As such, we don’t think higher inflation is enough to cause a bear market this time around.

Meanwhile, the weak peso is a concern for foreign investors, which currently account for half of the PSE’s value turnover, as it could erode the value of their portfolio. However, it is not enough to cause a bear market. Note the in 2017, the US dollar depreciated by 10 percent against a basket of currencies. Nevertheless, the US stock market as measured by the S&P 500 index increased by 19 percent during that year.

Moreover, the peso is weakening for a good reason, and it is because of the growing importation of capital goods, in line with growing investments and efforts to improve our country’s infrastructure. More investments should create more jobs while better infrastructure should eventually help us attract more foreign direct investments. These factors should, in turn, keep the peso from depreciating continuously. 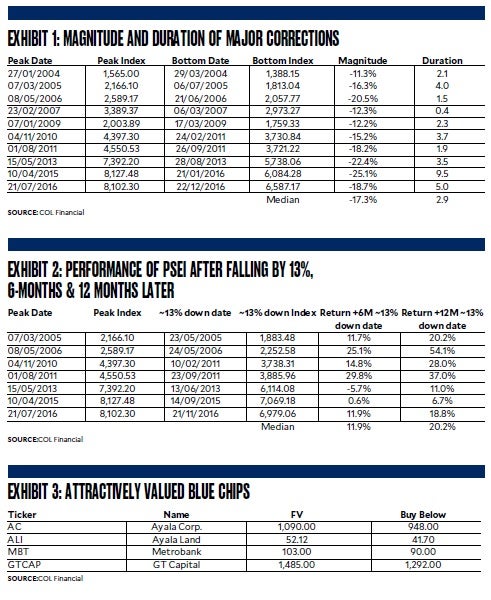 Although nobody knows where the bottom of this correction will be and how quickly the market will recover, investors who bought stocks too early should not worry and just hold on.

We did an analysis of the past 10 major corrections and asked this question: Assuming that an investor bought the market when the index was down 13 percent from the peak (which translates to the PSEi at 7,900 in our current scenario), what type of returns did he generate six months forward? Twelve months forward?

Here is the what we found out:

1. If the investor waited for the market to drop 13 percent before buying stocks, he would have missed three of the past 10 major corrections. This is because there were three instances when the market dropped by less than 13 percent.

Although an investor could be too early by buying at the 7,900 to 8,100 range, if history were to repeat itself, he would still be correct six to 12 months going forward. In fact, investors who are looking to buy this correction can already start accumulating at these levels due to the following reasons:

1. As discussed earlier, when buying the market once it is down 13 percent from the peak, the return outlook six to 12 months going forward is already positive.

2. On average, the market bottomed three months from the peak. Since we peaked in Jan. 29, the market could bottom sometime end of April.

3. The advantage of being early is that it allows investors to fully invest their portfolio. This is especially true for investors with large portfolios that cannot be fully deployed in one transaction. Although being early might not allow an investor to generate the highest percentage return, being fully invested will allow him to generate the highest absolute return. (Think 50-percent return on P100,000 vs. 20-percent return on P1,000,000)

How to invest
during market correction

Here are the strategies we recommend on how to invest during market corrections:

1. Determine the amount of funds that you can keep invest ed for the next 12 months. We are not discounting the possibility that the market could stay depressed for some time. We also don’t know when it will recover. However, history has shown that returns are always positive 12 months later.

2. Split your funds into eight to 10 buying tranches and deploy each tranche on a weekly basis provided that the PSEi is trading below a predetermined “buy below” level. We suggest setting your “buy below” level at 7,900, although you could set it lower if you wish. Buy stocks only when the PSEi trades below 7,900 one tranche at a time. By buying in tranches, you improve your average purchase price since you can buy more if prices continue to fall.

3. Diversify. Buy either a basket of stocks belonging to different sectors or an ETF or an index mutual fund to diversify your holdings. That way, you reduce your risk as some stocks perform better than others.

Exhibit 3 lists some blue-chip stocks we like that are already trading at attractive values and their suggested “buy below” levels. However, for greater ease, you may choose to execute your strategy buying an ETF (such as FMETF) or an index fund from the different asset management companies. —CONTRIBUTED