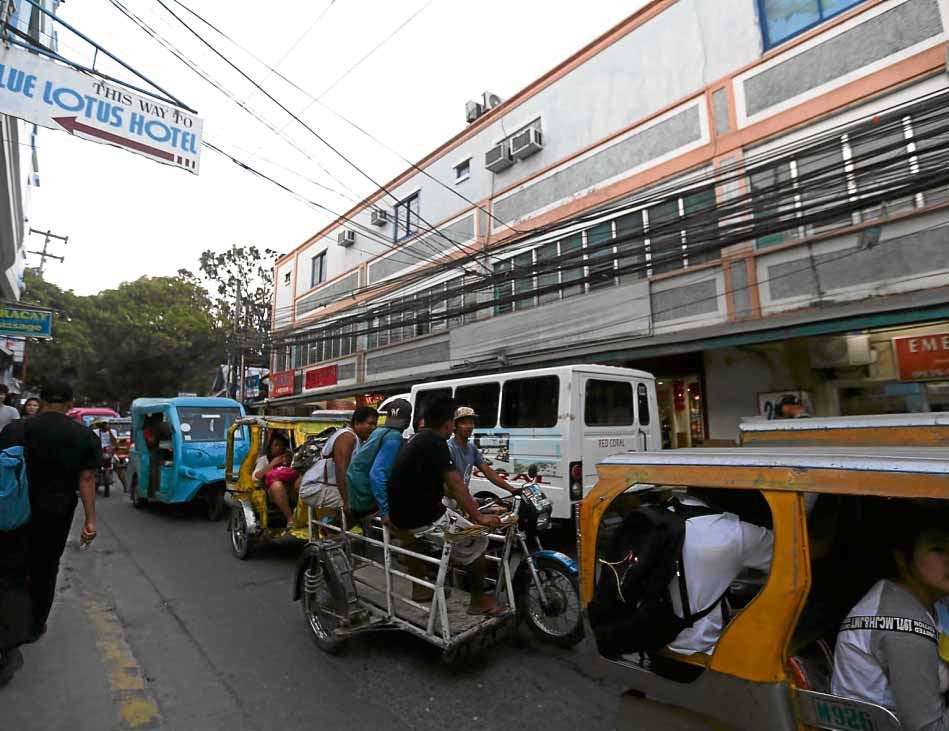 MAIN STREET Vehicular traffic is expected to ease along the main street of Boracay as the holiday island is closed to tourists for six months, starting on April 26, for rehabilitation. —LYN RILLON

Boracay residents and business operators have expressed sadness and frustration over President Duterte’s order to close down the resort island for six months, starting April 26, after weeks of appeal against it.

“(The closure) is too long and they should have opted for alternatives instead that will not burden those who are compliant with the laws and regulations,” one business operator said.

One resident claimed that the islanders were demoralized. “They do not know what to do because they have mouths to feed, children who are still in school and family members who require medical attention.”

Many ranted on social media.

“Dear President Duterte, is the Philippine government going to pay the rent for the locals, put food on their tables, give their kids lunch money, pay their electricity, settle their medical bills, pay the tuition for family members they are putting through college (and) protect their properties from looting,” one said.

Supporters of the President also lamented the closure order.

“It is quite ironic with your recent decision that can possibly damage or negatively change the lives of thousands of people in Boracay Island once it’s shut down,” according to a Facebook post by Ley De.

Fr. Edgardo Encarguez, convenor of a coalition against the closure, said Mr. Duterte’s decision “will lead to the loss of jobs of more or less 30,000 workers and the destruction of livelihood of thousands of families.”

Malay Mayor Ciceron Cawaling said the closure was declared even without any detailed plan on the shutdown and rehabilitation.

Jose Clemente III, president of the Tourism Congress of the Philippines, expressed hope that the financial aid meant for workers in Boracay would be “enough to ensure that their lives won’t be that difficult.”

While the local government, residents and business people in Boracay decried the shutdown, San Miguel Corp. president Ramon Ang said he supported the government initiative to transform the island into a sustainable tourist destination.

The Boracay Tourism Stakeholders asked Mr. Duterte to limit the closure only to properties and establishments that violated environmental and zoning regulations. —WITH REPORTS FROM ROY STEPHEN C. CANIVEL, DAXIM L. LUCAS AND JEROME ANING

Read Next
Airlines cancel flights to Caticlan, Kalibo
EDITORS' PICK
What to expect as Metro Manila starts ‘no vaccination, no ride’ policy on Monday
Metro Manila’s daily COVID-19 growth rate drops to 2% — Octa Research
Over 3 Million worth of prizes to be won at Smart Padala’s SENDali Manalo Promo!
SMDC’s Bloom Residences: A master planned community that cares for your health and wellness
COVID-19 cases in PH pass 3.2 million mark with 37,154 new cases — DOH
Upsilon, Unilever give ‘real talk’ on climate change crisis
MOST READ
IATF protocols now apply to travelers who arrived on or before Jan. 13
‘Not my loss’: Did Kris Aquino just comment on her breakup with Mel Sarmiento?
Thailand records first Omicron death
Tito, Vic and Joey still not quitting, breaking trends as they celebrate 50th year in the biz
Don't miss out on the latest news and information.