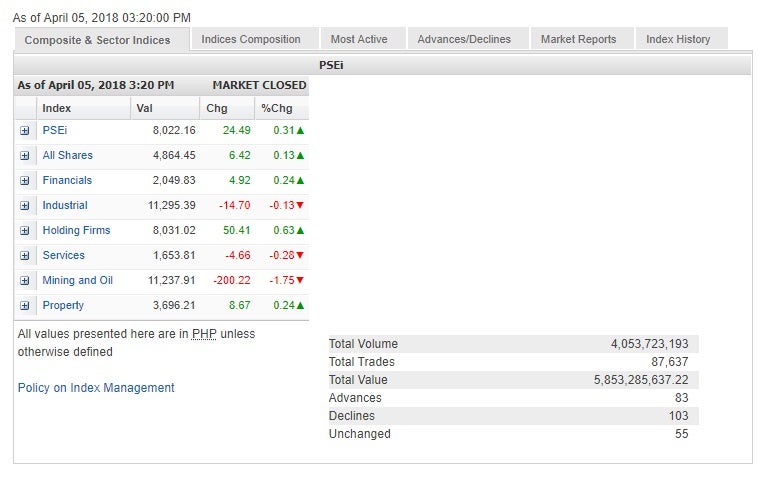 The local stock barometer shook off early losses and firmed up back to the 8,000 level yesterday on highly selective picking of large-cap stocks.

The PSEi was led higher by the financial, holding firm and property counters.

On the other hand, the mining/oil counter fell by 1.75 percent while the industrial and services counters slipped.

Despite the PSEi’s gain, market breadth was negative as 103 decliners edged out 83 advancers while 55 stocks were unchanged.

BPI, Ayala Land, SM Prime and AEV all firmed up.

Notable gainers outside the PSEi included Vulcan, which rose by 6.25 percent, while Megawide added 1.18 percent.

Outside the PSEi, LR tumbled by 10.29 percent as investors pocketed gains from earlier Boracay casino play.

Bloomberry tumbled by 4.82 percent as fourth quarter earnings fell by 87 percent due to the lower “win” rate from its VIP gaming segment.

Global Ferronickel declined by 3.5 percent while MRC Allied and CEI fell by 2.99 percent and 1.72 percent, respectively.