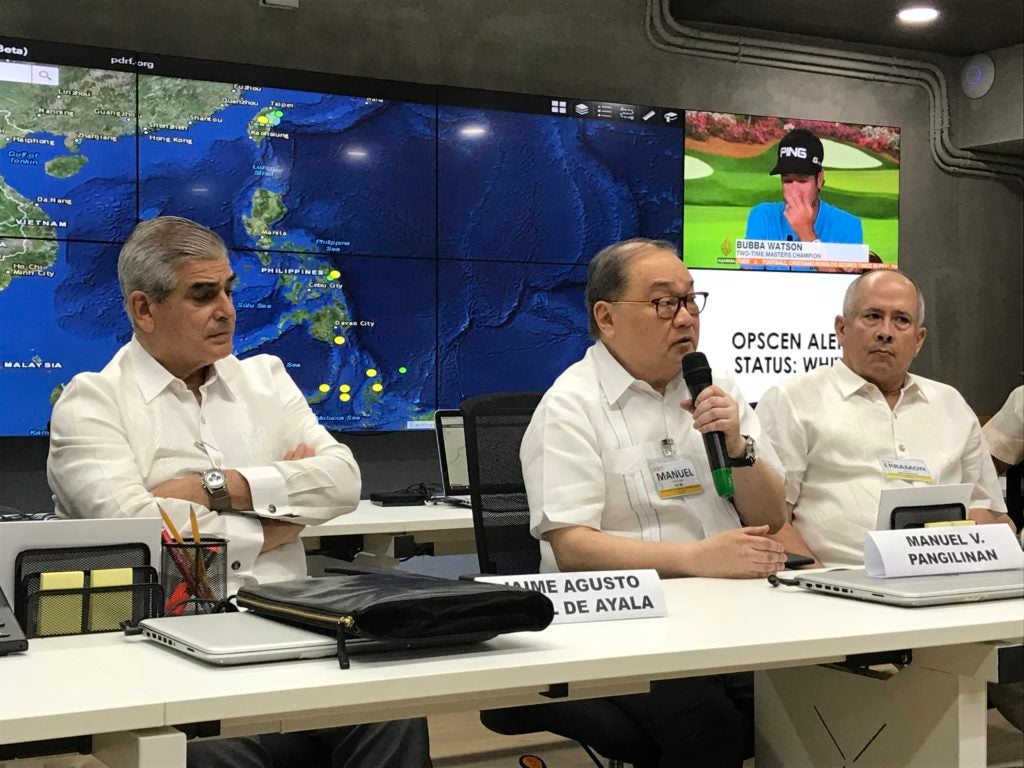 The world’s first privately run national emergency operations center (EOC) was activated yesterday in the idyllic district of Clark, a former US Air Force base which itself had risen from the ashes spewed by Mount Pinatubo in 1991.

Designed like similar hubs overseas, this Clark EOC is a project of the Philippine Disaster Resilience Foundation (PDRF), an alliance of business groups aiming to help the Philippines better prepare for disasters as well as coordinate relief and response efforts when such disasters strike.

The Philippines, one of the most disaster-prone countries in the world, has 22 active volcanoes and grapples with a number of fault lines. It is visited by 20-25 typhoons a year.

This EOC provides alerts and updates to the PDRF network and coordinates asset inventory and the status of lifeline services. But the center also supports efforts in times of humanitarian crises, including rebuilding war-ravaged Marawi.

The central feature of the facility is the command center which harnesses data from local and international sources to enhance PDRF’s capacity to monitor earthquakes, tropical cyclones, volcanic eruptions and pandemics. It also maps data on public infrastructure to help protect them from hazards.

“PDRF builds platforms in establishing a disaster-resilient Philippines. PDRF’s formation is premised on the conviction that disaster management is not solely up to the government. The despair of one must touch us all and everyone must help,” said PDRF cochair Manuel V. Pangilinan, who is also the CEO of PLDT-Smart and Metro Pacific Groups.

Pangilinan said part of the group’s duty was to be a beacon of hope for disaster-stricken communities.

“PDRF is part of a large collaborative effort that led to the realization that we needed to look at our response to natural disasters in a different manner and from a different perspective. We had to look at it from the paradigm of resilience and focus more efforts on preparedness, prevention and mitigation,” said PDRF cochair and Ayala Corp. chair and CEO Jaime Augusto Zobel de Ayala.

Lorenzo Shipping chair Doris Magsaysay Ho, who also heads Asia Society Philippines Foundation, said during the launch the EOC could also operate like a Grab Taxi in terms of coordinating the deployment of assets during emergency situations. “There are other redundant little bits that could be harnessed. Maybe one town has an ambulance sitting there and another one needs it,” she said.

Clark in Pampanga was the chosen location for the EOC due to its close proximity to the Clark International Airport and the port of Subic Bay. More importantly, Clark—which is far from any of the major fault lines—is one of the designated recovery sites identified in the government’s national contingency plan.

Erramon Aboitiz, Aboitiz Equity Ventures CEO, said one key learning from the Super Typhoon “Yolanda” experience in 2013 was that there was a lot of duplication in disaster relief efforts. The EOC is seen to better coordinate initiatives and likewise allow the private sector to leverage on what they are already doing.

“The Clark EOC empowers the private sector in all aspects of disaster resilience, which is essential to the safety and welfare of the Filipino people,” said PDRF president Butch Meily.

“Our search for solutions at PDRF led us to think about resilience, the ability to bounce back. But we wanted to do more than bounce back. We wanted to move to a better state than what we were in. To do this, we needed to build a culture of disaster preparedness and prevention,” said PDRF chief resilience officer Guillermo Luz.

Around 80 business groups have now committed to support PDRF’s project.

Two years prior, PDRF launched a smaller operations center at Shell House, Makati City. This will now function as a backup site. As a single storm can theoretically affect both Clark and Makati hubs, Luz said plans were underway to build another EOC in the Visayas.