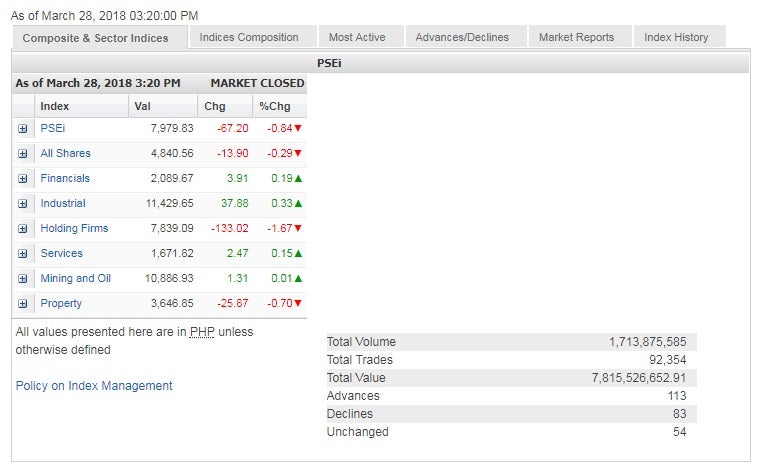 The benchmark Philippine Stock Exchange Index (PSEi) again slid below 8,000 ahead of the Holy Week break, tracing the decline in Wall Street overnight.

Subindices, however, ended mixed on Wednesday. Only the holding firms and property subsector closed in the red, losing 1.67 percent and 0.7 percent, respectively. Gainers were led by industrial companies, up 0.33 percent, followed by financials, up 0.19 percent.

A total of 1.7 billion shares valued at P7.8 billion changed hands yesterday. Based on data from the PSE, there were 113 gainers against 83 losers while 54 companies closed unchanged.

Ayala Land Inc. was the most actively traded on Wednesday. It closed unchanged at P41.10 a share.

Around the region, China stocks fell on Wednesday, tracking losses on Wall Street where tech firms were hit hard on concerns over tighter government scrutiny on the industry. At the close, the Shanghai Composite index was down 1.4 percent at 3,122.29, while the blue-chip CSI300 index closed down 1.8 percent at 3,842.72.