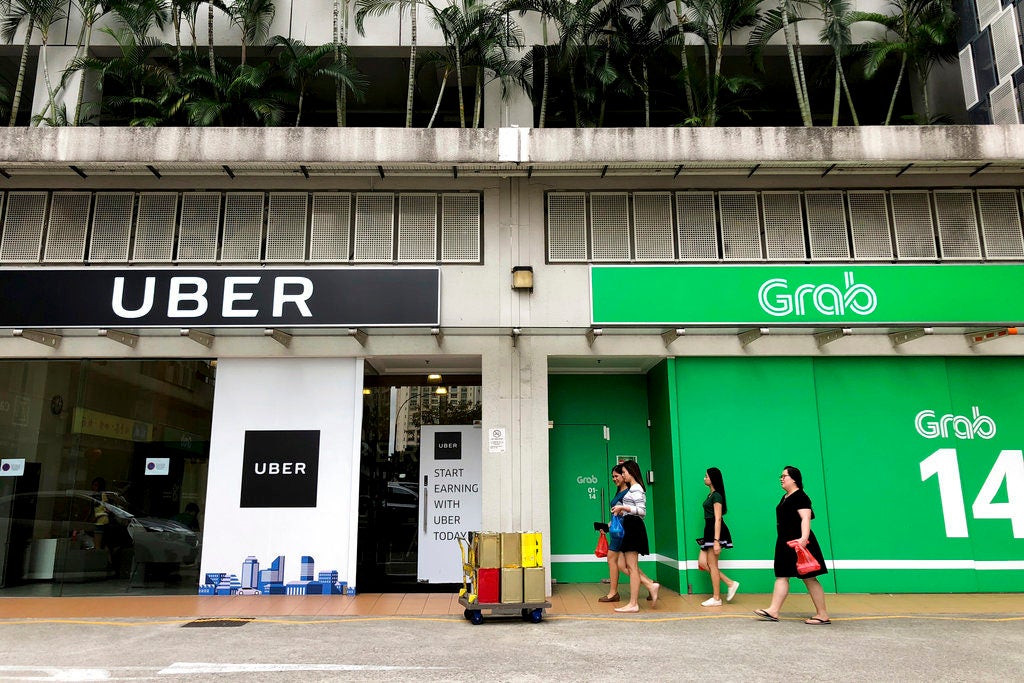 Office workers walk past Grab and Uber offices during their lunch hour Monday, March 26, 2018, in Singapore. Grab, a fast growing Southeast Asian ridesharing, food delivery and financial services business, said Monday that Uber will take a 27.5 percent stake in it and a seat on its board as part of the deal. (AP Photo/Wong Maye-E)

Grab announced Monday it would take over Uber’s operations and assets in the Philippines, Cambodia, Indonesia, Malaysia, Myanmar, Singapore, Thailand and Vietnam, ending months of speculation.

In exchange, California-based Uber will get a 27.5-percent stake in the combined business—a move seen to cut Uber’s massive losses as it prepares to go public next year. Grab said the figure reflected Uber’s market share in the region.

In the Philippines, Grab has taken out a key rival in an environment where growth has been constrained by a ride-sharing vehicle cap implemented by regulator Land Transportation Franchising and Regulatory Board (LTFRB).
Moreover, the companies might need the approval of the Philippine Competition Commission before completing the deal in the country.
PCC commissioner Johannes Bernabe said if the deal met the agency’s transaction thresholds, then the parties must file a transaction notice.
“Parties have 30 days from execution of their definitive agreement within which to notify the PCC,” he said in a text message on Monday. He said parties “are not supposed to consummate their transaction” while PCC reviews the deal.
According to Grab, Uber’s service in Southeast Asia would be available until April 8 this year as drivers transition to Grab’s platform. Moreover, Uber’s business services would no longer be supported in Southeast Asia after the transaction.
“With a larger fleet of drivers on our platform, passenger transportation needs will be met faster. Passengers will get to enjoy shorter waiting times, more convenient and affordable rides through one platform,” Grab said.
It said the fare structure for passengers alongside incentives and benefits for drivers would remain the same.

A Grab spokesperson declined to share domestic figures although the company, which launched in 2012 as a taxi-booking service, claimed that around five million people use its platform every day.

The ride-sharing demand-and-supply gap is pronounced in the Philippines, where a more than 10-minute wait for a ride is not unusual. LTFRB recently capped the supply of transport network vehicle services (TNVS) at 65,000 for Metro Manila, 1,500 units for Cebu and 250 for Pampanga. This followed an almost two-year moratorium.

LTFRB board member Aileen Lizada said on Feb. 23 that the cap would be enough to serve around 75 percent of existing demand. It will be reviewed every three months. Lizada said passengers should ideally wait just two to three minutes for their ride.

The transition worried the likes of Marcial, who declined to have his surname published.

He cited key differences in how Grab and Uber drivers accept passengers. Grab drivers are allowed to view the destination of riders before accepting a trip— a feature not allowed in Uber.

As noted, Grab and Uber would be “working together to promptly migrate Uber drivers and riders” over the next two weeks.

“We are very excited to welcome Uber drivers to our Grab family. They have our full support and resources in this time of transition,” Brian Cu, Grab Philippines country head, said in a statement on Monday.