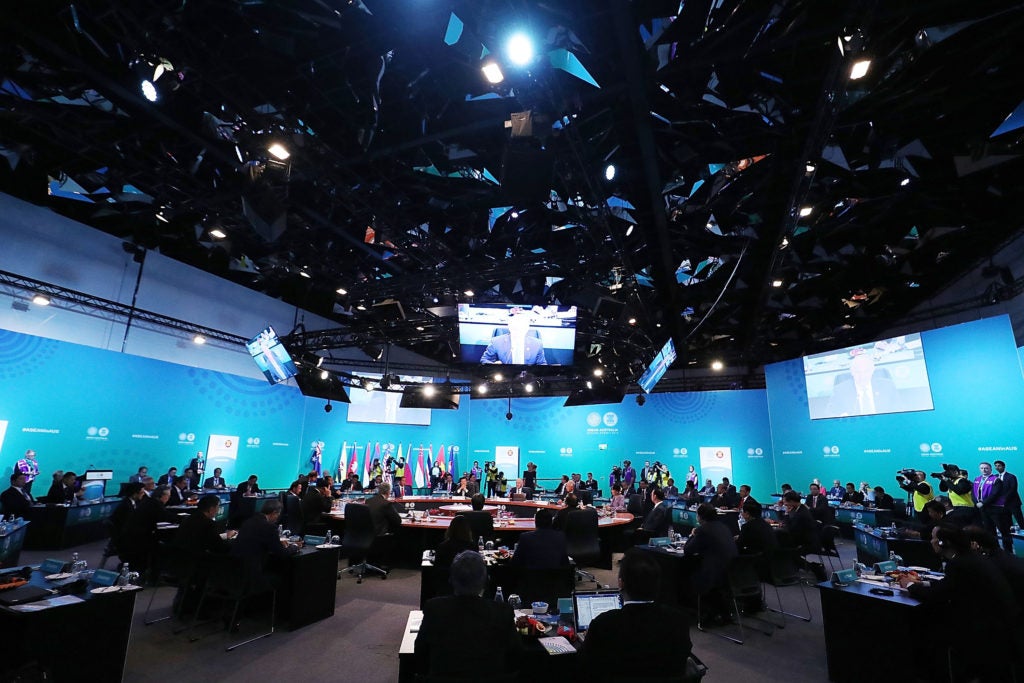 This general view shows the Leaders Plenary Session of the Association of Southeast Asian Nations (ASEAN)-Australia Special Summit in Sydney on March 18, 2018. AFP

Laos Prime Minister Thongloun Sisoulith, Australian Prime Minister Malcolm Turnbull and other Asean leaders made a joint declaration on Sunday at the end of a special Asean-Australia Summit in Sydney that aims to be an official guideline for the two dialogue partners to shape their cooperation policies in the coming years.

One of the key messages in the joint declaration was that Asean and Australia will continue to support the development of the region into a free trade area where tariff and non-tariff barriers are to be eliminated.

“As highly trade-oriented economies, we reaffirm our support to enhance trade and investment as well as resisting all forms of protectionism to improve regional development and prosperity,” the joint declaration said.

“We are committed to free and open markets and underline the critical importance of the rules-based multilateral trading system.”

The Asean-Australia joint declaration reflects the standpoint of the two dialogue partners that they do not welcome protectionism, which US President Donald Trump is pushing.

The US government has increased tariffs for steel imported from China as part of measures to protect its domestic steel processing industry.

Many fear this US policy will be extended to other countries with which the US has a trade deficit.

The Lao government’s decision to support the development of an Asean-Australia free trade area reflects its commitment to integrate itself into the regional and world economy.

The government believes the development of free trade will make Laos an attractive investment destination, thanks to its plentiful natural resources such as fertile land, as well as cheap labour. The inflow of foreign investment has acted as a driving force to boost economic growth, job creation and prosperity.

In the past, high tariffs in the region were a barrier to Laos’ efforts to attract foreign direct investment. A decade ago, many foreign investors did not want to invest in Laos because they feared they would have to pay high tariffs to export goods from Laos to the world market.

Vice President of the Lao National Chamber of Commerce and Industry, Mr Daovone Phachanthavong, said the country has a high capacity to attract foreign direct investment from Australia in a number of areas, including agribusiness, mining and transport.

Australia has high expertise in agriculture that Laos can adopt to become a major exporter of agricultural produce, he added.