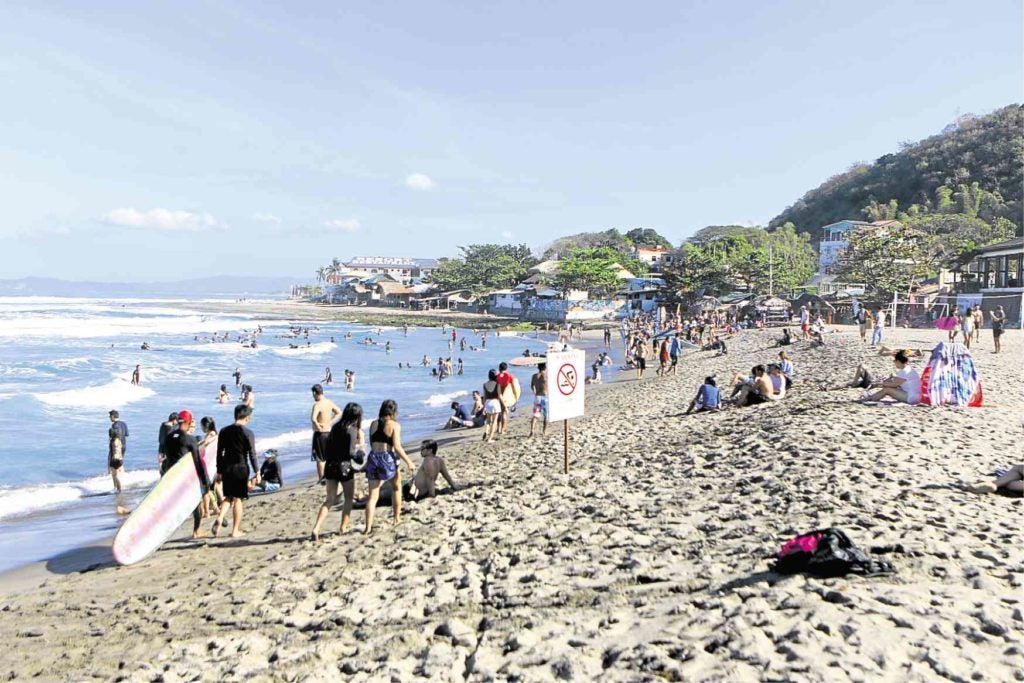 Vacationers in San Juan huddle on the sandy beach, watching the waves break and enjoying the cold wind blowing from the West Philippine Sea.

SAN JUAN, LA UNION—On any weekend, the Manila North Road that cuts through the coastal village of Urbiztondo here is filled with parked cars and vans.

At dusk, restaurants, coffee shops and other establishments lining the road come alive, as groups of tourists begin to look for a place where they could hang out and unwind for the day.

Those unable to find a spot just huddle on the sandy beach, watching the waves break and enjoying the cold wind blowing from the West Philippine Sea.

There has been a “meteoric” rise of tourist arrivals here, according to lawyer Reynaldo Dulay, a resort owner and founder of the 40-year-old La Union Hotels, Restaurants and Resorts Association.

The town’s tourist attraction is a 250-meter cove where the waves racing to the shore are suited for surfing.

“We have a catch basin of waves here,” said Carlo Galera, manager and instructor of FatWave Surf School, one of the surf schools that have sprouted here.

“It’s because the cove is short. So, we have waves for beginners, intermediate and professional [surfers],” he added. 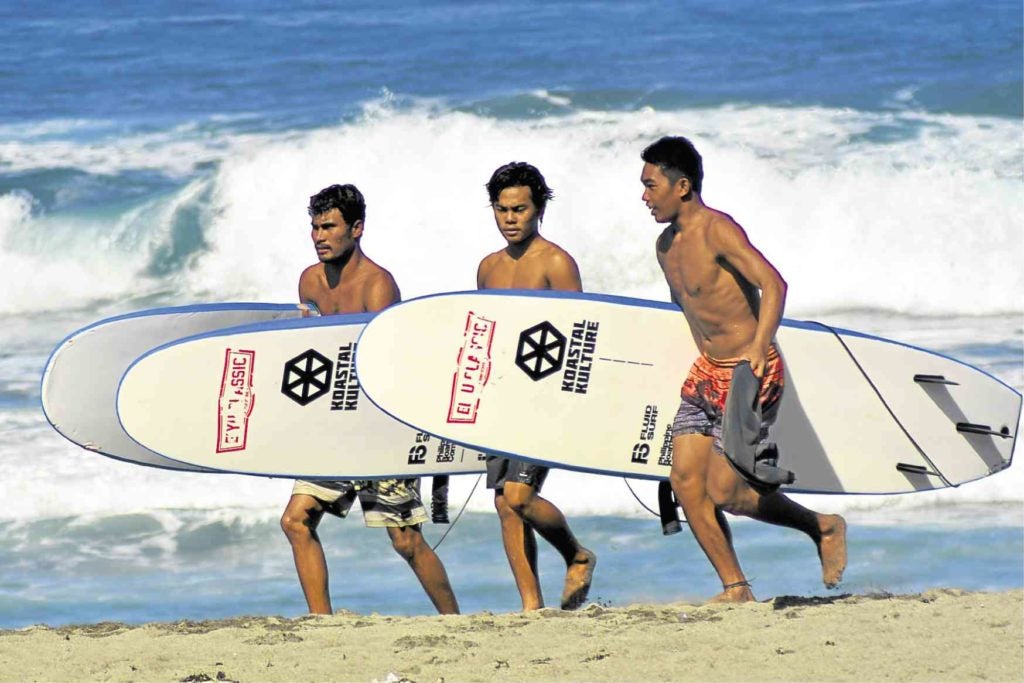 San Juan drew surfer attention after the opening in April 2014 of the Tarlac-Pangasinan-La Union Expressway exit in Rosales.

Until three years ago, this town was not among the country’s popular surfing destinations such as Baler town in Aurora province and Siargao Island in Surigao del Norte.

Dulay said San Juan drew surfer attention after the opening in April 2014 of the Tarlac-Pangasinan-La Union Expressway exit in Rosales town in Pangasinan, that reduced travel time from Metro Manila to this town by at least two hours.

“We have become more accessible compared, for instance, to Baler,” Dulay said.

By car, the trip from the metro to Baler, which is in the eastern coast of Luzon, takes at least five hours. With TPLEx extending to Pozorrubio in Pangasinan, San Juan is at least a four-hour drive from Metro Manila.

While owners of resorts, restaurants and hotels here are happy over the tourism boom, some of them have become apprehensive about the problems that the bustling tourism industry has brought to their town.

A shortage of hotel rooms is now beginning to be felt here. “There is a shortage of about 1,000 rooms during the peak season from October to May,” Dulay said. “This is why private houses are now being converted for homestay services.”

Parking spaces are scarce so tourists park their vehicles on both shoulders of the MNR, which Dulay said was illegal.

“By nature, when the crowd comes, garbage and traffic [prob lems] follow,” he further said.

The San Juan government is aware of these concerns, said Vice Mayor Miko Magsaysay, and measures have been put in place to address them.

The government has been upgrading its facilities in response to the emerging environmental problems, he said. “We are attending to all the concerns, especially the garbage and [waste] water treatment.”

Although the town is a peaceful community, Magsaysay said maintaining peace and order is still the local government’s priority because it goes hand in hand with tourism.

“This is true when more tourists are coming in. It’s one thing to go to San Juan but it’s another thing to have them come back,” he said.

In May last year, Dusit International began building a resort here featuring a 174-room hotel complete with amenities like a gym, a spa, a swimming pool, restaurants and bars, and a 1,000-capacity function room and a spacious parking space. The project, which is the first international hotel in northern Luzon, is scheduled to open by 2019.

Dulay said there are now more investors from Metro Manila than those from La Union, who have put up restaurants and other establishments. More investors are expected to come, he added, especially with TPLEx’s announcement that it will build a 54-km extension of its expressway to this town.

With the extension, travel time from Metro Manila to here will only be about three hours.

“If that happens, all establishments here will have to operate 24 hours a day because tourists will then be arriving any time of day,” said Dulay.

“We have to be ready for it,” he noted, adding that this town’s tourism code, which has been submitted to the provincial board for approval, must be implemented soon.

Among the important provisions is the accreditation of surf schools and instructors.

“Under the tourism code, the composition of the accreditation board includes hotel and resort owners as well as surfers’ associations. At present, accreditation is only being done by a private organization, the La Union Surf Club,” Dulay said.

“That’s dangerous because the town may be caught in a legal bind once an accident happens [which could be traced back to these surfing clinics]. They should immediately implement the tourism code,” he said.

The approval in December of a House resolution declaring La Union as a tourist destination and the surfing capital of the north was “timely,” he added.

The bill, which highlights the beauty and splendor of La Union’s beaches as well as the importance of their continued upkeep and development, among other things, has been transmitted to the Senate for concurrence.