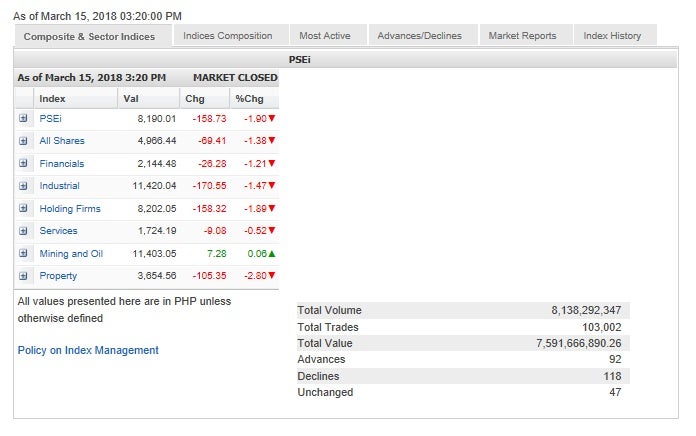 The local stock barometer slid to the 8,100 level on Thursday as large foreign funds continued to flow out of the market amid volatile US markets.

Tracking the overnight downturn in Wall Street, the Philippine Stock Exchange index (PSEi) lost 158.73 points or 1.9 percent to close at 8,190.01, so far its worst finish for the year.

The most battered was the property counter, which fell by 2.8 percent on expectations that rising local inflation would prompt an increase in interest rates.

The financial, industrial and holding firm counters all fell by more than 1 percent.

Only the mining/oil counter was slightly up.

“It seems like foreign funds are still liquidating their positions. I am looking at 8,150 as the next support level. We might have a technical rally as bargain-hunters come in, but weakness will continue for a while,” said Manuel Lisbona, president of PNB Securities.

Local stockbrokerage Papa Securities said the index had gone down sharply after breaching the key support levels at 8,300 and 8,260 levels, and the next major support would be at 8,050.

Value turnover for the day amounted to P7.59 billion. There were 118 decliners that edged out 92 advancers while 47 stocks were unchanged.

Net foreign selling in the stock market amounted to P1.4 billion. Foreign funds have been flowing out in the last three weeks.

Investors dumped shares of SM Prime and RRH, which both fell by more than 4 percent, while BDO, Ayala Corp., SM Investments and URC all tumbled by more than 3 percent.

Ayala Land, the most actively traded company for the day, slumped by 2.77 percent.

Jollibee and Meralco also both declined by more than 1 percent while Metrobank, BPI and AEV also declined.

Outside of PSEi stocks, there was heavy selling on Ionics, which slid by 15.9 percent.

On the other hand, PLDT, ICTSI and Megaworld slightly gained.

One notable gainer outside the PSEi basket was Pilipinas Shell, which rose 2.98 percent.