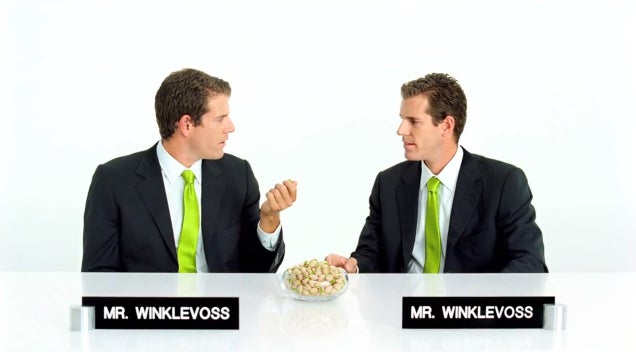 The Winklevoss Twins in the Wonderful Pistachios Get Crackin’ Ad. Image: 2011 YouTube, LLC

Twins who made a fortune in cryptocurrency after settling a claim they came up the idea for Facebook on Tuesday pitched a plan to regulate the wild digital money market.

“We believe adding an additional layer of oversight on virtual commodity cash markets, in the form of self-regulation, is important for consumer protection and to ensure the integrity of these markets,” Cameron Winklevoss said in an online post.

The Winklevoss twins contended that the creation of an independent regulatory body is the “next logical step in the maturation of this market.”

The British government early this year called for global regulation of controversial virtual currency bitcoin, adding that the G20 would address the topic this month.

Bitcoin is independent of governments and banks and uses blockchain technology, where encrypted digital coins are created by supercomputers.

The virtual currency is not regulated by any central bank but is instead overseen by a community of users who try to guard against counterfeiting.

Virtual currency exchanges have seen tremendous volatility, and have sparked concerns they can be used to launder money for criminal networks.

Trading of digital currency in the US is regulated as a commodity, such as corn or oil.

Quintenz congratulated the Winklevoss brothers for “their energetic leadership and thoughtful approach” to the idea of a regulatory body.

“A virtual commodity SRO that has the most independence from its membership, the most diversity of views, and the strongest ability to discover, reveal, and punish wrongdoing will add the most integrity to these markets,” Quintenz said in a statement.

The Winklevoss twins are part of the story of Facebook’s controversial genesis story.

In 2008, a $65 million settlement was reached with three Harvard classmates — twins Tyler and Cameron Winklevoss, and Divya Narendra — over their charges that Mark Zuckerberg had stolen the idea for Facebook from them.

The conflict was at the heart of “The Social Network,” the Oscar-winning film written by Aaron Sorkin and directed by David Fincher. NVG