PSEi down as foreign selling continues 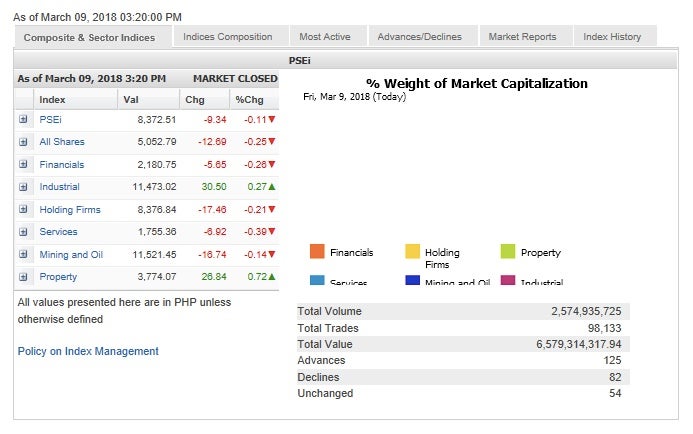 The local stock barometer slipped yesterday as investors lacked fresh incentives to load up on large-cap stocks at a time when foreign investors were still on the selling mode.

The main-share Philippine Stock Exchange index (PSEi) shed 9.34 points or 0.11 percent to close at 8,372.51 as investors focused on trading companies outside the PSEi.

Elsewhere in the region, stock markets mostly firmed up on hopes for improved US-North Korean relations. Based on wire reports, US President Donald Trump was ready to meet North Korean leader Kim Jong-un for the first US-North Korea Summit, welcomed by many as a breakthrough in the geopolitical arena.

Yesterday, the PSEi was weighed down most by the financial, holding firm, services and mining/oil counters. On the other hand, the industrial and property counters gained.

“In terms of technicals, the index is still moving sideways near its initial support level at 8,323, the low last December 21,” local stock brokerage Papa Securities said.

Despite the PSEi’s decline, market breadth was positive as there were 125 advancers that edged out 82 decliners while 54 stocks were unchanged.

The PSEi was dragged down by Ayala Corp., which declined by 1.73 percent, while Jollibee slipped by 1.02 percent.

There was likewise profit-taking on non-PSEi stocks like Now Corp. and MacroAsia, which both lost nearly 3 percent. SBS and Golden Haven also both fell by over 1 percent.

On the other hand, Ayala Land and Metrobank slightly gained.

The market’s favorite for the day was Prime Media, which gained by 50 percent in relatively heavy trade, while First Gen rose by 7.61 percent.

MRC Allied and Xurpas rose by 4 percent and 2.78 percent, respectively.