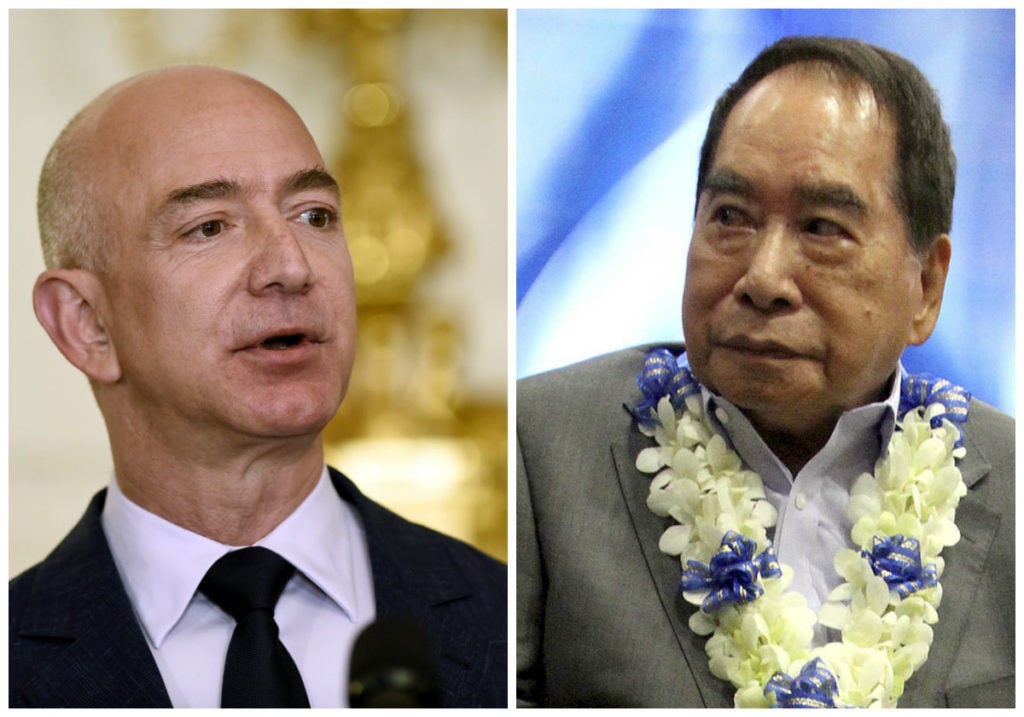 With an estimated net worth of $20 billion, SM founder Henry Sy Sr. remains the richest among the tycoons from the Philippines who made it to Forbes magazine’s latest annual list of the wealthiest people on the planet.

Forbes said the 12 richest Filipinos had a combined fortune of $55.6 billion (about P2.9 trillion), nearly a fifth of the domestic economy.

Jeff Bezos is still the richest person on the planet with $112 billion, double the combined wealth of 12 billionaires from the Philippines, as the value of his e-commerce listed firm Amazon surged 59 percent in the last 12 months.

A record 2,208 billionaires around the world made it to Forbes’ 32nd annual ranking. Altogether they are worth a record $9.1 trillion, up 18 percent from a year ago, according to the March 6 article posted by the US magazine.

An Oxfam report found that the world’s richest 1 percent received 82 percent of the wealth generated in 2017, while the poorest of humanity got nothing.

The growing inequality has led to the rise of populist leaders, including US President Donald Trump.

52nd wealthiest in world Sy’s net worth of $20 billion is over three times larger than the fortune of the next richest tycoon from the Philippines, as his net worth surged 57 percent from that of last year.

SM Investments and SM Prime have both breached the P1-trillion market capitalization mark and are the first two companies to reach this milestone.

JG Summit founder John Gokongwei Jr., 91, is the second wealthiest person from the Philippines with a net worth of $5.8 billion, ranking 305th globally.

Enrique Razon Jr.—who has established a global footprint through International Container Terminal Services Inc. and is building an integrated gaming empire through Bloomberry Resorts Corp.—is valued by Forbes at $4.9 billion, earning him the 404th slot globally.

At 58, he is the youngest billionaire from the Philippines.

Tobacco magnate Lucio Tan, 83, is 441st on the global list with a net worth of $4.7 billion. He is also into banking (Philippine National Bank), aviation (Philippine Airlines) and liquor (Tanduay and Asia Brewery) businesses.

Tony Tan Caktiong, chair and founder of Jollibee Foods Corp., is next on the list of Filipino tycoons with $4 billion, ranking 550th globally.

George Ty, founder of the Metrobank group and who built a market-leading automotive business in the Philippines with Toyota, has an estimated net worth of $3.9 billion. The 85-year-old tycoon ranked 572nd globally.

As rich as Trump

Manny Villar Jr., 68, who focused on growing his real estate-based empire after losing the 2010 presidential election, is valued at $3 billion. He ranked 791st worldwide.

Among the listed companies under his leadership are Vista Land & Lifescapes, Starmalls and Golden Haven.

Villar is almost as rich as businessman-turned-US President Trump, who is valued at $3.1 billion.

Forbes said Trump was one notable loser in this year’s rankings, as his fortune fell by $400 million since March 2017, now 766th in the world, down from 544th.

Insurance and car dealership mogul Robert Coyiuto Jr., 65, has a net worth of $1.4 billion and ranked 1,650th globally.

SMC chair Eduardo Cojuangco, 82, is still among the world’s richest with an estimated net worth of $1.3 billion even after he sold  a big chunk of SMC to Ang in 2012.

Roberto Ongpin, 81, still has a formidable fortune estimated at $1.1 billion. After selling out of gaming technology venture Philweb Corp., he is focused on upscale property developer Alphaland Corp.

Microsoft cofounder Bill Gates is the second richest in the world with $90 billion.

Warren Buffet of Berkshire Hathaway is the third richest with $84 billion while Bernard Arnault, CEO of the world’s largest luxury goods conglomerate LVMH of France, ranked fourth with $72 billion.

Read Next
Aboitiz submits bid for 4 regional airports
EDITORS' PICK
New Year, New Rediscoveries
Is your company a growth champion? Stand up and be recognized!
Biden team says US will not lift travel bans, despite Trump statement
No warrantless arrests despite DND-UP accord termination, says PNP spox
Cagayan gov endorses 10-day ECQ in Tuguegarao due to COVID-19 surge
Experience clearer calls nationwide with Smart VoLTE
MOST READ
Proposed toll for newly opened Skyway 3 ranges from P110 to P274
In 2020, we were all the raped daughter in ‘Kisapmata’
Palace: Duterte’s ‘no payment of gov’t dues, no franchise’ remark covers all, even ABS-CBN
Lapu-Lapu: From one-centavo coin to P 5,000 bill
Don't miss out on the latest news and information.

In 2020, we were all the raped daughter in ‘Kisapmata’