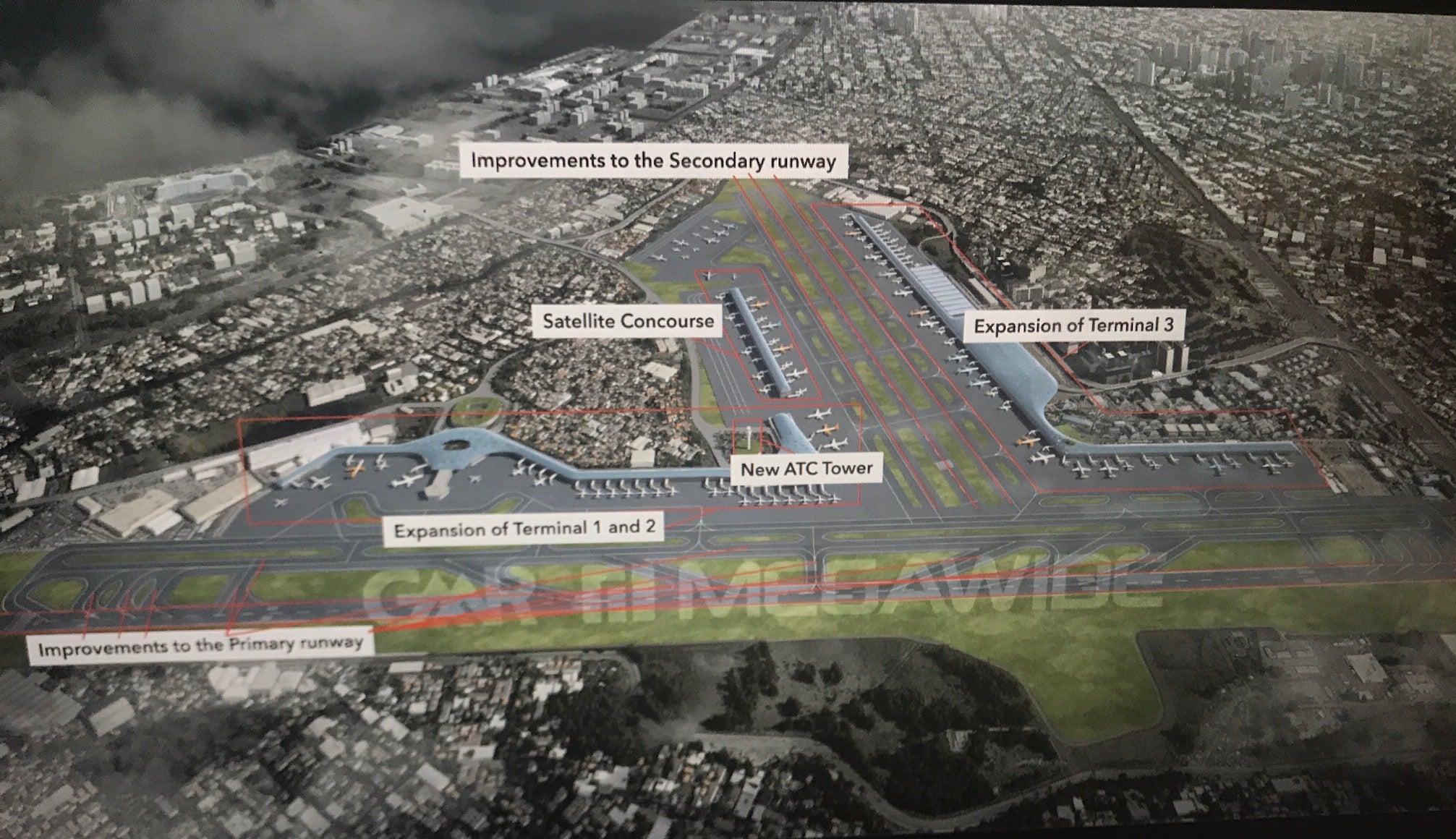 Perspective of Megawide-GMR’s Naia proposal, minus the plan for a third runway. (Contributed image)

As the government took a temporary backseat concerning the future of the Ninoy Aquino International Airport (Naia), two competing private sector proposals have emerged with a conspicuous fault line: the need for an additional airport runway.

Naia has a pair of intersecting runways. Whether it needs a third runway has been the subject of debates for many years.

The rationale for building a new runway is to increase the number of flights to meet growing demand. This is measured in the hourly takeoff and landing movements, of which Naia had hit its peak of 40 movements. More traffic on the runway translates to curtailed growth, flight delays and losses in income and opportunities.

This is a separate issue from congested passenger terminals, a problem that also plagues Naia.

The erstwhile Department of Transportation and Communications in 2015 abandoned a plan for a third runway, which would have been parallel to Naia’s primary facility.

This was because of the time-consuming and costly expropriation of occupied land in the Merville residential area in Parañaque. Moreover, a parallel runway would have affected a main artery of the C-5 road.

Three years later, the private sector is divided on the need for a third runway.

In February, a “super consortium” of seven conglomerates submitted a P350 billion offer for Naia. The proposal for a 35-year concession contains provisions for new passenger terminals and a third runway, part of the so-called phase 2 of its proposal.

Details to the public were sparse but phase 2 is the bulk of the spending at P250 billion or 70 percent of the total estimated project cost.

Meanwhile, Megawide Construction and India’s GMR Infrastructure took a different approach with their P150 billion offer. It costs much less, in part, because it did not consider a third runway.

The tandem, which sought a shorter 18-year concession, said the key here include maximizing airside facilities and expanding existing terminals.

“The third runway is not the solution, we ruled it out,” Andrew Harrison, an authorized Megawide-GMR consortium representative, told reporters in a briefing.

Because expropriation made a nearby parallel runway unviable, as the DOTC had determined, the private sector was also looking at Manila Bay as an alternative.

Megawide-GMR’s view on a third runway

Harrison said they carefully studied a new runway in Manila Bay and determined it did not make sense for Megawide-GMR, which currently operates the Mactan-Cebu International Airport.

He explained that building the runway in Manila Bay would require a “complex” network of taxiways to reach the main Naia complex. Moreover, planes landing or taking off from the Manila Bay runway would need to taxi a long distance.

Another area that was studied was the orientation of the new runway in Manila Bay. Megawide-GMR determined that in any direction, it would affect the approach, departure and missed-approach procedures on at least one of Naia’s two intersecting runways.

This, Harrison said, would lessen the benefit of a third runway and in the worst-case, reduce the utility of Naia’s existing two runways.

He said addressing airside issues such as the lack of taxiways, rapid-exit taxiways and aircraft parking stalls would help increase runway capacity at Naia from 40 movements per hour to 60 movements.

“The benefit of that alone is more than a third runway,” Harrison said. /jpv