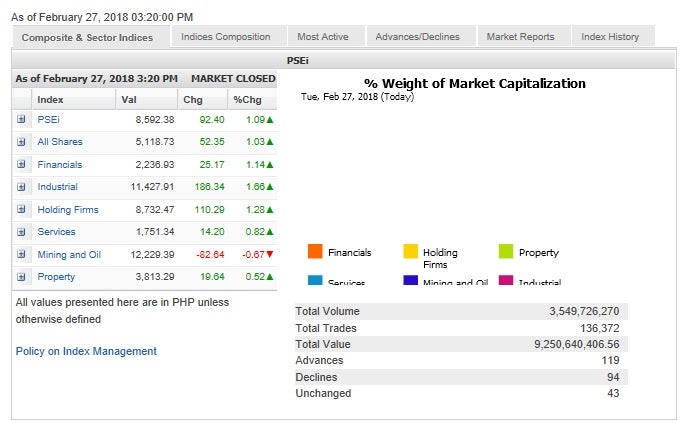 The local stock barometer rallied back to nearly 8,600 yesterday as local bargain-hunters were emboldened by the upbeat trading in Wall Street ahead of the first public statement from the new US Federal Reserve chief Jerome Powell.

The Philippine Stock Exchange index (PSEi) racked up 92.4 points or 1.09 percent to close at 8,592.38 as investors bet that Powell would not be too hawkish and that he would be just like his predecessor, Janet Yellen.

Except for the mining/oil counter, all other counters gained at the local market. The financial, industrial and holding firm counters all added over 1 percent.

Local stock brokerage Papa Securities said investors could be seeing an opportunity to accumulate on weakness.

Value turnover for the day amounted to P9.25 billion. Domestic investors were still the ones driving the market but net foreign selling declined to P276.98 million compared to P1.53 billion in outflows in the previous day.

There were 119 advancers that edged out 94 decliners while 43 stocks were unchanged.

The PSEi was lifted by JG Summit, which rallied by 5.63 percent, while BDO, URC and AGI all added over 4 percent.

BDO reported record-high net profit of P28.1 billion for 2017, up by 7 percent. It met its earnings goal and maintained the highest bottomline among banking peers for the year. This was the highest net profit level among Philippine banks, reaping the fruits of above-industry asset growth in the last two decades. BDO’s net profit exceeded Bank of the Philippine Islands’ P22.42 billion and Metropolitan Bank and Trust Co.’s P18.22 billion for the same year.

Puregold gained 3.13 percent while SM Investments, Jollibee and PLDT all advanced by more than 1 percent.