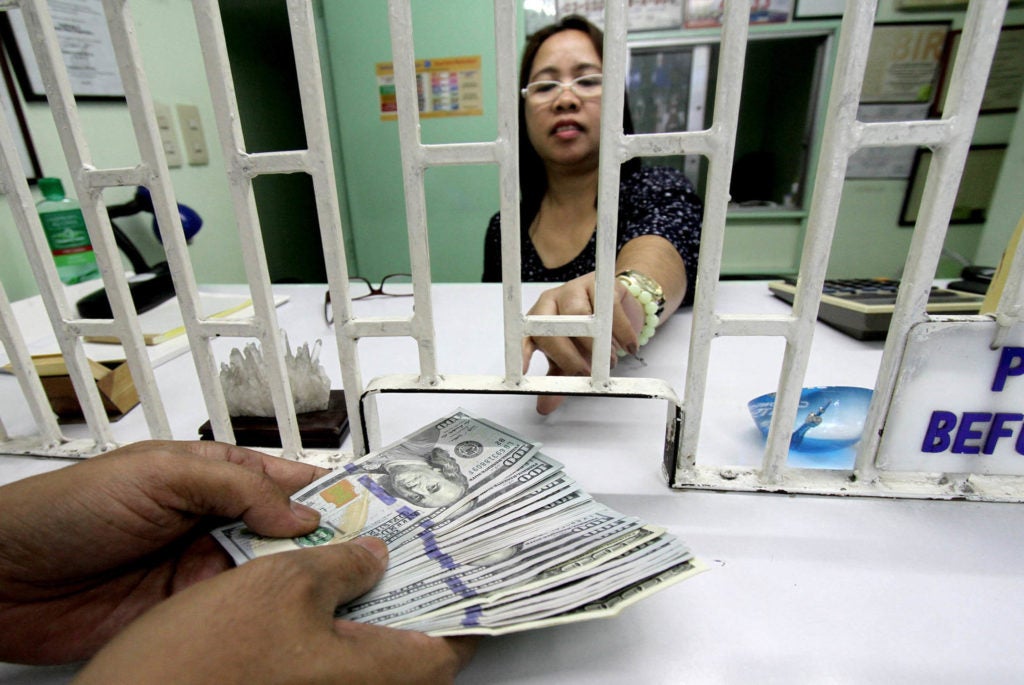 A customer changes dollars on a money changer in Manila. INQUIRER PHOTO / RICHARD A. REYES

The peso may weaken to 53 against the US dollar through next year but this is a “manageable” adjustment necessary for the country to address infrastructure bottlenecks and sustain a higher growth path, a top economist of Ayala-led Bank of the Philippine Islands (BPI) said.

After sustaining a gross domestic product (GDP) growth rate of more than 6 percent for six straight years, BPI economist Emilio Neri Jr. said the Philippines was moving toward a higher growth trajectory, likely to hit 6.8 percent this year and 7.2 percent in 2019 on the back of the government’s massive infrastructure spending.

“The golden age of infrastructure didn’t happen last year but we expect a significant amount to kick in this year,” Neri said, adding that spending on midterm elections would also allow growth to breach 7 percent in 2019.

But with the Philippines catching up with all the capital spending needed to build new roads, bridges, power plants, railways and telecommunication infrastructure, importation of capital goods has expanded at a faster pace relative to exports, thereby widening the trade deficit.

“The peso is underperforming once again and let me convince you that this is for very good reasons, very valid reasons, only partially political. Most of it is because the Philippines is one of the most exciting, most interesting economies in Asia, if not in the global economy, today,” Neri said.

Based on BPI’s official forecasts, the peso will likely end this year at 52.92 and next year at 53.20 against the dollar. The local currency is projected to average 51.43 this year and 53.06 next year.

Neri explained that with the Philippines using foreign currencies to buy all the metals, cement, trains and other equipment abroad, the peso would naturally adjust. Otherwise, he said the country—long eclipsed even by Vietnam in terms of spending on fixed capital.—would never be able to catch up with the requirements of a growing economy.

The country’s trade gap, or the difference between import bill and export receipts, has widened from only $12.2 billion in 2015 to $29.8 billion in 2017 and is projected to reach $31.3 billion this year. For the first time in many years, the trade gap has eclipsed remittances from overseas Filipinos, which reached $27.6 billion and are projected to amount to $28.4 billion this year.

“And if the peso does not adjust accordingly, it can bring us back to the dangerous levels of 1997 and I don’t want to remind you about what happened between 1997 and 2007, that entire decade when there was little growth in bank lending because funds are locked in real estate from borrowed funds abroad,” Neri said.

The easier way to let some steam off the economy is to allow a “modest” and “manageable” depreciation of the peso.

“We’re lucky to have a very professional (Bangko Sentral ng Pilipinas) governor, Nestor Espenilla Jr., who is allowing this to happen so that we can sustain the performance of the economy,” he said.