Rise of the new city 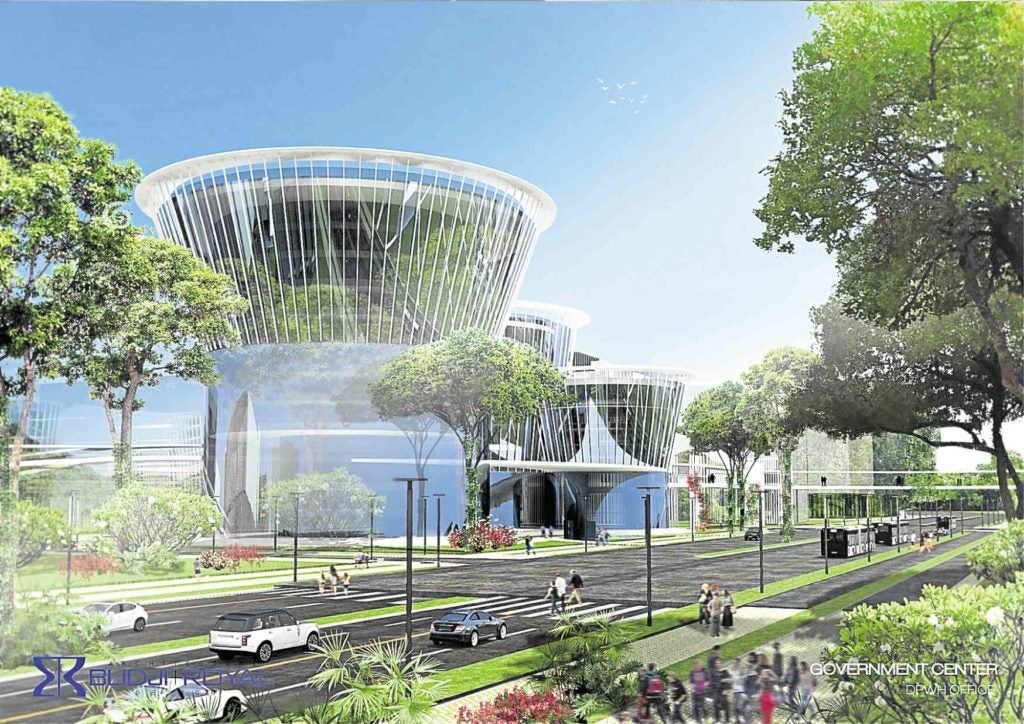 A new, modern city is fast taking shape, designed to be green and sustainable, multifaceted and integrated, an archetype of the metropolis of the future.

In recent years, much has been abuzz about the 9,450-hectare New Clark City and how it is poised to be the country’s first smart, disaster-resilient and green metropolis, which, upon completion, is expected to contribute a gross output of approximately P1.57 trillion per year to the national economy.

The Philippines is slowly inching closer to that vision.

That’s because by the end of next year, some 40 hectares within the New Clark City will already house a portion of the planned National Government Administrative Center (NGAC) which will include two government buildings, a world class sports complex that will serve as one of the venues for the 30th SEA Games scheduled in the last quarter of 2019, and a housing facility that can accommodate some 1,000 athletes.

MTD Capital Berhad of Malaysia, the parent firm of AlloyMTD Philippines, is investing some P13 billion for the project, which broke ground last month.

Between 2020 and 2022, AlloyMTD will be constructing six more government buildings, about 6,000 housing units, and retail and commercial establishments within another 20-ha area, said AlloyMTD Philippines chairman Engr. Isaac S. David.

David expressed confidence that despite the tight construction schedule, they will be able to deliver on time these projects that comprise the first phase of a much bigger NGAC project.

To recall, MTD Capital Berhad won the bid to build a government hub within a 200-ha parcel in New Clark City, after it submitted to the state run Bases Conversion and Development Authority (BCDA) its P121-billion proposal, which underwent Competitive Challenge.

According to David, there are three reasons why a new administrative center makes sense: to decongest Metro Manila, to serve as back up plan for the government in case of disasters or natural calamities, and to further ease doing business here and therefore help improve the country’s competitiveness as an investment destination.

“Our inspiration for our proposal is the Putrajaya, the federal administrative center of Malaysia. What we are experiencing now was experienced by Kuala Lumpur 25 years ago—flooding, garbage, traffic congestion, overpopulation, and pollution. They decided to move the seat of government out of Kuala Lumpur, clearing some 5,000 ha of palm tree plantation. That was the birth of Putrajaya,” David shared.

“Government centers are not new. The original concept came from the United States when it transferred the seat of government from New York City to Washington DC in 1790, because they were also experiencing the same thing: congestion, pollution, high population density. So my dream for New Clark City is to have the government there, complete with facilities and schools, entertainment complexes, malls, and house of worship,” he explained.

And given the long standing expertise of MTD Capital in infrastructure development,  there is no doubt that AlloyMTD is more than fit to handle one of the Philippine government’s most ambitious project to date. 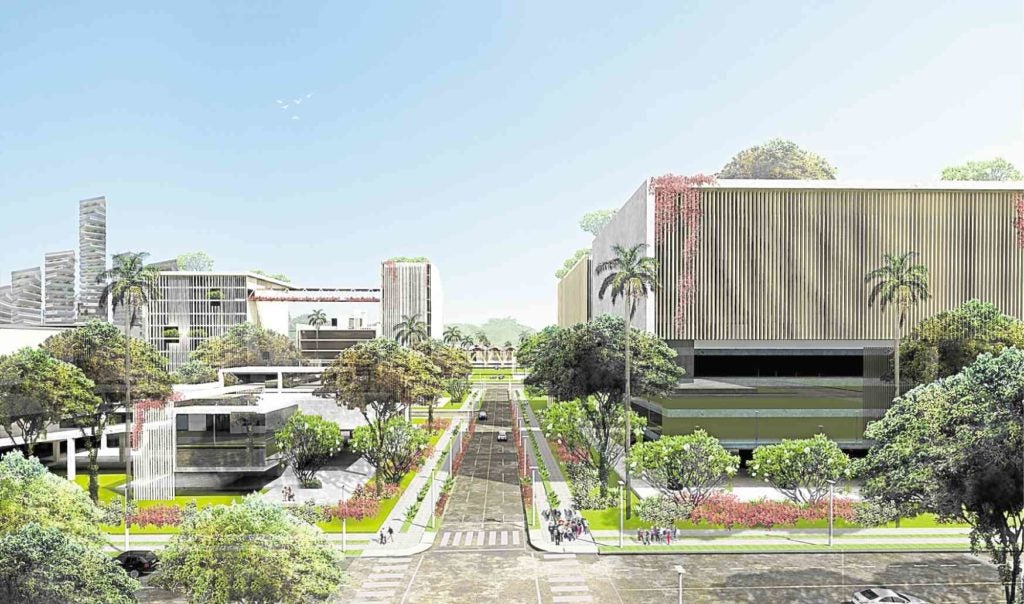 Artist’s perspective for the government center

Part of the reason why the government agreed to the idea of a government center, according to David, is because of the threat of the “Big One”—a magnitude 8, intensity 7.2 earthquake that is seen to devastate Metro Manila should it occur.

The idea is to have back-up offices of state agencies at Clark as this will allow the government to have a business continuity plan, thus ensuring business operations and services should disasters strike.

But just how safe is Clark?

Based on certifications from the Philippine Institute of Volcanology and Seismology, Clark’s favorable geological conditions make it less vulnerable to earthquakes.

New Clark City is also safe from flooding with its lowest elevation at 54 meters above sea level (masl) while the highest would be at about 800 masl. To compare, the highest elevation within Metro Manila is in Bonifacio Global City at just 40 masl.

The area may be spared from the damaging effects of typhoons since its neighboring mountain ranges, the Zambales Mountain Range and Sierra Madre Mountain Range, will serve as natural barriers.

To help create a truly modern city that will be future proof, the joint venture (BCDA and AlloyMTD Philippines) also tapped renowned interior designer Budji Layug and Arch. Royal Pineda for the groundbreaking design plan for the first phase of NGAC.

“We are bringing the soul of modern Philippines in the New Clark City. Our partnership with AlloyMTD and BCDA is not just about making a world class city, but also presenting a new standard for the world to see that there is a modern Filipino standard that is internationally at par but distinctively ours,” Pineda explained. “BCDA is also geared towards uplifting the national pride not just in terms of infrastructure, but also in terms of the the level of design and identity.”

Layug added that they also seek to bring the standard of Philippine architecture and design to a global level.

“We are exploring and working with the Pinatubo and make that as our new fiber for the city—a major material for architecture. The new concrete of the city will have to come from lahar if you’re looking for authenticity,” Layug added.

He explained: “This will be manifested in terms of the materials that will be used and the texture of the buildings. We are collaborating with AlloyMTD for the materials as we want to make everything more progressive and practical. The architecture is going to be practical as you won’t need to keep painting them because the material will be as natural as possible. Overhangs will also be present because of the tropical climate. These are elements of modern Philippine architecture and design.”

For the Aquatic Center, the proponents will make use of the PTFE, a fiberglass membrane that is lightweight, durable, weather resistant and a sustainable building material for roofing.

“The idea is to cover the Aquatic Center but to let the light in. It’s iconic too as it will remind you of capiz windows in old houses—and capiz came from shells that can be found in bodies of water. At night, it glows because the material is more translucent, and it will remind you of the giant lanterns of Pampanga. So we’re trying to make everything as authentic as possible,” Pineda added. 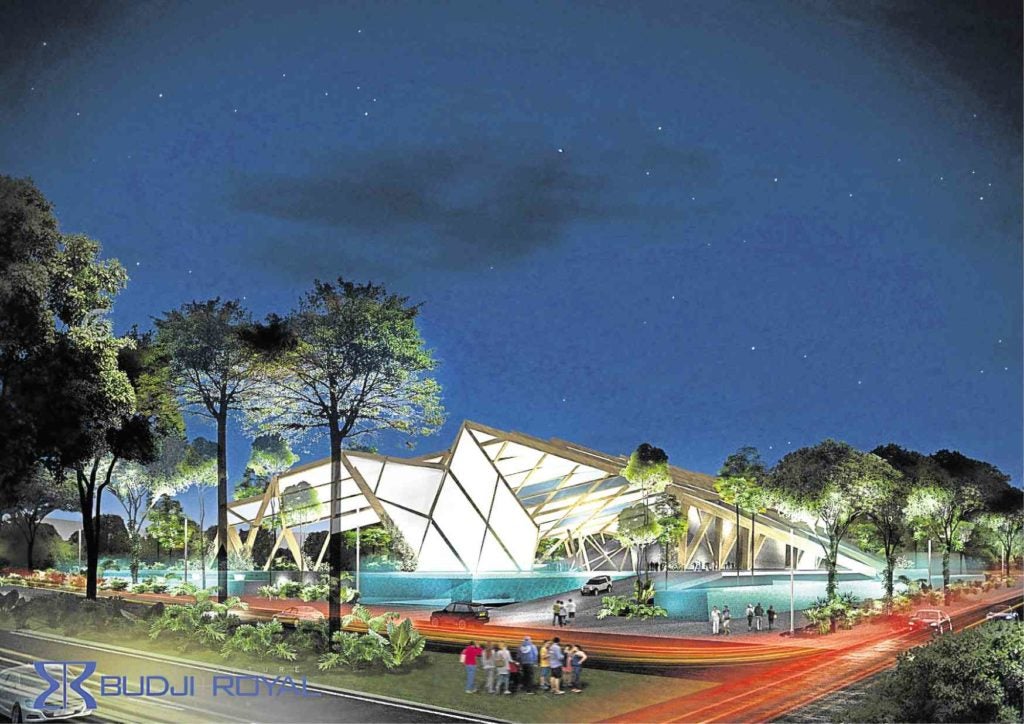 Artist’s perspective for the Aquatic Center