Duterte to Lucio Tan: ‘I’m going to forever shut up’ on past tax liabilities | Inquirer Business

Duterte to Lucio Tan: ‘I’m going to forever shut up’ on past tax liabilities 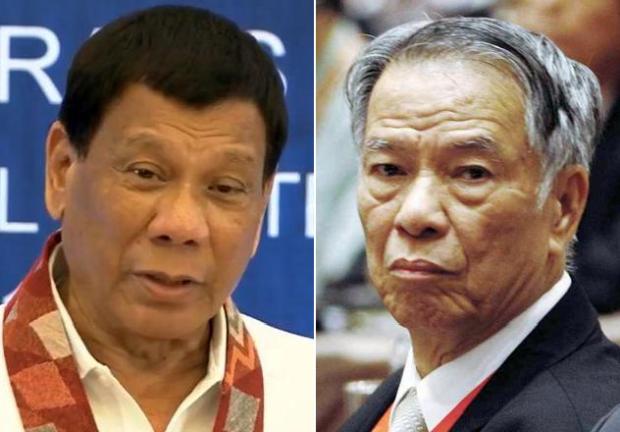 President Rodrigo Duterte on Tuesday cleared business tycoon Lucio Tan of his past tax liabilities, saying he would “forever shut up” on the subject.

[You will no longer hear me mention that you did not pay.]

The President was referring to PAL’s P6 billion in tax liabilities, which the company paid in October last year.

[It’s okay with me. It’s over and done with. You’ve already paid your taxes – and what you have shown. And mind you, I am ready to protect every businessman like you.]

Duterte also assured Tan that nobody in his government would ask him for bribe money.

[There’s no corruption in this government. I’m telling you: If anyone asks you for a bribe, just tell me. We’ll send it to Kuwait to have them killed.]

Last year, Duterte gave Tan a 10-day ultimatum to settle PAL’s tax liabilities or else the government would shut down NAIA Terminal 2, which the airline has been exclusively using since 1999.

PAL, the country’s flag carrier, heeded Duterte’s warning and paid the arrears within the deadline.

Duterte also told Tan that there would be no harassment under his government as long as people would “do the right thing.”

[With Lucio Tan, don’t worry. There’s no harassment in my government, whether we are political allies or foes.]

[Don’t worry that I will be resentful. I’m not resentful, because that’s just the way politics goes.]

The President said Tan and Lance Gokongwei of Cebu Pacific offered on Monday to deploy planes to fly home distressed OFWs from Kuwait.

The offer came after the Department of Labor and Employment (Dole) ordered the repatriation of 10,000 overstaying migrant workers in Kuwait.