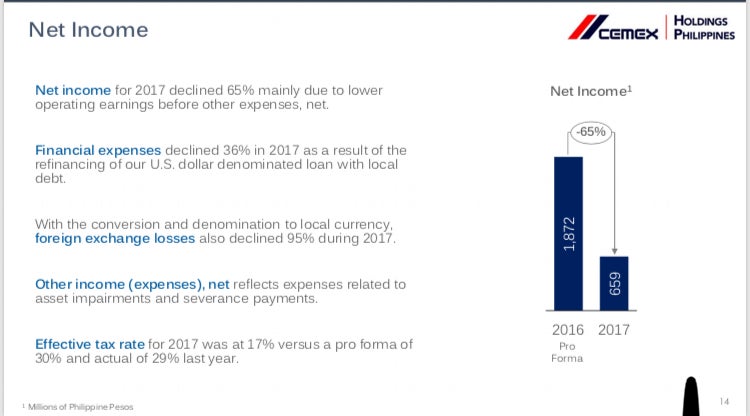 Cemex 2017 results as disclosed to the Philippine Stock Exchange

Cement-maker Cemex Holdings Philippines Inc. saw a 65-percent drop in net profit to P658.8 million last year as operating profit was weighed down by lower prices and higher fuel and distribution expenses while sales volume was flat amid stiff competition.

For the fourth quarter alone, Cemex incurred a net loss of P29.15 million, 306-percent higher than the net loss in the same period year-on-year, although domestic sales volume started to pick up during the period.

Cement volume increased by 10 percent in the fourth quarter despite the challenging weather conditions, bringing the full-year average growth to 1 percent.

“Public infrastructure spending continued to increase in the last three months of the year, driving demand for our products, and compensated for a slowdown in private construction activity,” Cemex disclosed to the Philippine Stock Exchange on Friday.

“We remain focused on executing our capacity expansion plan in Solid Cement Plant. In addition, we are undertaking efforts to debottleneck our operations, achieve higher customer service levels, and reduce costs to drive growth for our business,” he said.

Cemex is an indirect subsidiary of Mexico’s CEMEX S.A.B. de C.V., one of the largest cement companies in the world based on annual installed cement production capacity.