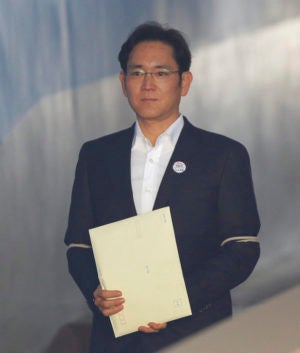 SEOUL, South Korea — A South Korean appeals court on Monday handed a 2 ½-year suspended jail sentence to Samsung heir Lee Jae-yong in a corruption case seen as a test of the country’s commitment to ending cozy ties among political and business elites.

Lee, the only son of Samsung’s ailing chairman, had been sentenced to five years in prison last August after being convicted of bribery and other crimes linked to a political scandal that took down former South Korean President Park Geun-hye.

The Samsung vice chairman pleaded not guilty to charges he used Samsung corporate funds to bribe Park and a confidante, seeking to consolidate his control over Samsung and facilitate a smooth transfer of corporate leadership from his father.

Prosecutors had sought a 12-year prison term for Lee at the appeals court.

The more lenient ruling surprised many who were expecting a tough stance from the appeals court.

The earlier ruling on Lee was seen as a departure from the previous court cases that had been criticized for being too lenient on white-collar crimes and especially on the leaders of South Korea’s chaebol, the big conglomerates that helped the country’s rapid industrialization.

Close ties among political and business leaders once were seen as the key to South Korea’s impressive rise from the ashes of its 1950-53 war, but they are now blamed for stifling innovation and fostering inequality and corruption. Park was impeached and removed from office over the Lee allegations and other alleged corruption and her criminal trial is ongoing.

“To a certain extent, this case started by the public’s desire wanting to see the end in collusion between the government and big businesses,” said Chung Sun-sup, head of corporate analysis firm Chaebul.com.

Before the final hearing at the appeals court Lee paid back 8 billion won ($7.3 million) to Samsung Electronics. The lower court had said Lee embezzled that amount from Samsung to bribe a confidante of Park’s.

Despite Lee’s pleading not guilty, few had expected that he would walk out of prison.

“If he were found innocent or had received a suspended prison term, it would have flipped out the entire country,” Chung said before the ruling.

Prosecutors were expected to bring the case to the Supreme Court, the final court of appeal in South Korea.