US stocks swoon, sending Dow down more than 650 points 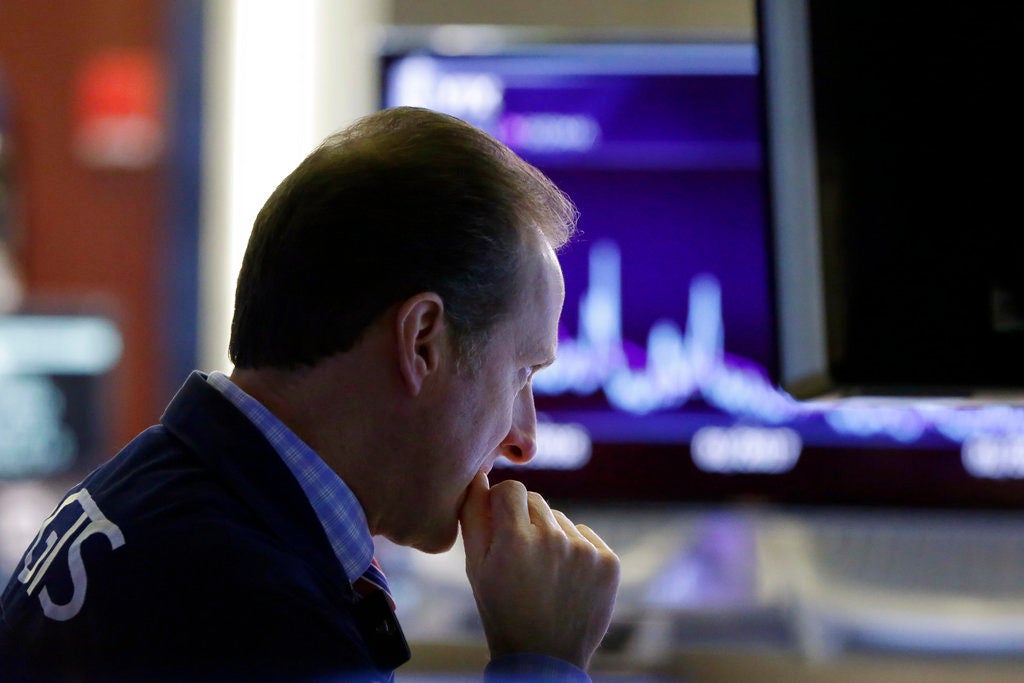 U.S. stocks slumped Friday, and the market suffered its worst week in two years, as fears of inflation and disappointing quarterly results from technology and energy giants spooked investors. The Dow Jones industrial average dropped by more than 650 points.

Bond yields rose and contributed to the stock market swoon after the government reported that wages grew last month at the fastest pace in eight years. The Dow had its worst decline since June 2016, while the broader Standard & Poor’s 500 index had its biggest one-day percentage drop since September 2016.

“We’ve enjoyed low interest rates for so long, we’re having to deal with a little bit higher rates now, so the market is trying to figure out what that could mean for inflation,” said Darrell Cronk, head of the Wells Fargo Investment Institute.

The increase in bond yields hurts stocks in two ways: it makes it more expensive for companies to borrow money, and it also makes bonds more appealing to investors than riskier assets such as stocks.

The sharp decline in stocks this week short-circuited a robust start to the year that was spurred by strong global economic growth, solid company earnings and lingering enthusiasm for the GOP tax overhaul. Even with the pullback, the major indexes are still up more than 3 percent this year.

The downturn also follows a long period of unprecedented calm in the market. Stocks haven’t had a pullback of 10 percent or more in two years, and hit their latest record highs just one week ago.

While interest rates are still low by historical standards, meaning borrowing is still relatively cheap for businesses and people, they’ve been rising more swiftly, and that’s what has markets on edge.

The increase in rates has been driven by the prospect of stronger economic growth, and higher inflation, in the U.S. and abroad.

Bond prices declined again Friday, pushing yields higher. The yield on the 10-year Treasury note, a benchmark for interest rates on many kinds of loans, including mortgages, climbed to 2.84 percent, the highest level in roughly four years. The rate was at 2.41 percent four weeks ago and 2.66 percent on Monday.

“Once we started going north of 2.5 percent, and you put that together with an overbought market, it had the ingredients of a sell-off, especially since January was so strong,” said Jeff Zipper, regional investment strategist at U.S. Bank Private Wealth Management.

The S&P 500, which many index funds track, soared 5.6 percent in January, its biggest monthly gain since March 2016.

One concern for investors is that the Federal Reserve will respond to higher inflation by raising its key interest rate more quickly than expected. The government’s latest job and wage data stoked those concerns Friday.

U.S. employers added a robust 200,000 jobs in January, slightly above market expectations for an 185,000 increase. Meanwhile wages rose sharply, suggesting employers are competing more fiercely for workers. The figures point to an economy on strong footing even in its ninth year of expansion, fueled by global economic growth and healthy consumer spending at home.

That’s good news for Main Street USA, but not for Wall Street. Some economists were predicting Friday that the central bank will raise its benchmark rate four times this year, rather than the three times most previously expected.

The market slide may have been overdue, particularly after the strong start for stocks this year where the S&P 500 had its best January in two decades. Some investors saw a potential buying opportunity.

The global economy is still strong, corporate profits and sales have been better than expected this reporting season and buyers for stocks still remain, all reasons to be optimistic about stocks, said Nate Thooft, senior portfolio manager at Manulife Asset Management.

“It’s appealing, these 2 to 3 percent pullbacks,” said Thooft, who had been trimming some of his stock holdings after the market’s big January gains. “We look at this and say, ‘Maybe it’s your first day to buy a little bit.'”

While earnings overall have been strong, some big companies have posted disappointing results.

Apple declined 4.3 percent after the technology company said it sold 77.3 million iPhones in the last quarter, below the 80 million analysts expected. The stock slid $7.28 to $160.50.