India-Asean trade on the rise 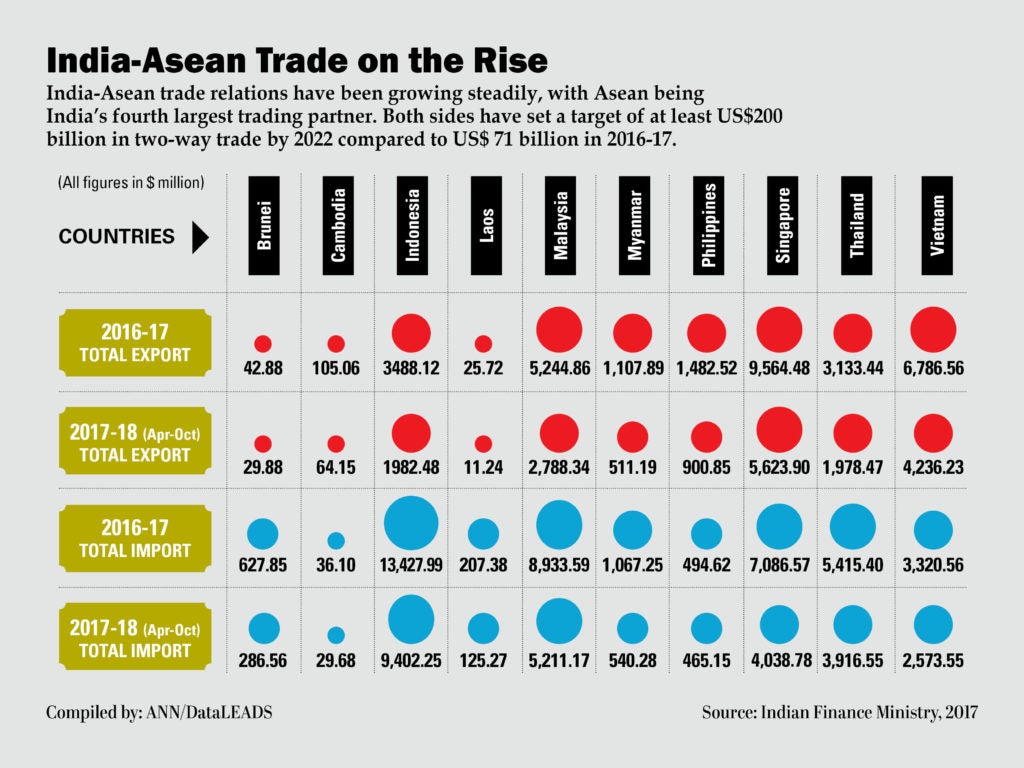 The trade relations between India and the Association of South-East Asian Nations (Asean) comprising of Indonesia, Singapore, Philippines, Malaysia, Brunei, Thailand, Cambodia, Lao, Myanmar and Vietnam have seen an upsurge since the last decade.

India and Asean are in the process of negotiating agreements on trade and services and to improve cooperation. Both sides are working towards decreasing the import duty on their products to increase trade. India signed a free trade agreement in goods in 2009 which was implemented in 2010 and FTA in services and investments in 2014 with Asean. And in 2015, India established a separate Mission to Asean and the EAS in Jakarta with a dedicated Ambassador to strengthen engagement with Asean and Asean centric processes.

Investment flows are also substantial both ways. In the years 2016-2017, India’s share of total exports and imports was around 11.2 per cent and 10.56 per cent, respectively. India also has a Comprehensive Economic Cooperation Agreement with various countries of the Asean region which has resulted in rise in investments; around 10 per cent of the total FDI equity inflows to India come from the Asean region.

Indonesia has emerged as the largest trading partner of India in the Asean region. India imports mainly coal, palm oil, copper ores and a few other products from Indonesia. Indonesia on the other hand imports machineries, accessories of motor vehicles, telecommunication equipments, animal feed, corn and wheat.

Top products that India exports to Asean countries are petroleum, beef, and crustaceans, flat rolled products of iron, alloyed steel and diamonds. Beef is the most demanded product in Asean nations and India is the largest beef exporter in the world. India imports palm oil, coal, electronic gadgets, and automatic data processing machines from the Asean countries.

India is keen to strengthen its ties with Asean countries and it was in this context that Indian Prime Minister Narendra Modi recently invited the leaders of all ten Asean nations to join him in country’s Republic Day celebrations.