(First of a series)

Even before he was elected the country’s 16th President, Rodrigo Duterte revealed during his campaign precisely how he would dismantle the telecommunications duopoly of PLDT Inc. and Globe Telecom.

From his curse-laden rallies to sedate town hall forums, the then Davao mayor never failed to criticize the two operators for their poor service quality. At a March 2016 rally in Tacloban, he called on PLDT and Globe to spend what money they could to prevent his victory, far from certain at the time, or he would open up their industry to more competition from American and Chinese firms.

It was this fearless, populist style of speaking out against the wealthy and powerful that earned him votes from Filipinos weary of the perceived status quo. He won the presidency by a landslide just two months later.

Mr. Duterte holds on to his overwhelming popularity to this day, even as campaign pledges have been a hit and miss.

The promise for a telco sector shakeup, however, might be a bull’s-eye.

On Nov. 20, 2017, Malacañang announced that it offered the third telco slot to China, whose ties with the Philippines had warmed considerably under Mr. Duterte. Soon after, state-run China Telecom, that country’s third-biggest mobile player, emerged as the prospective investor.

This set into motion a series of events poised to reshape the local telecommunications scene and end the duopoly that has been in existence since 2011.

In examining the conditions that led to this situation, Inquirer Business started with the person leading the charge. From his relatively spartan office in Quezon City, Eliseo Rio Jr., acting secretary of the Department of Information and Communications Technology (DICT), is busy overseeing the process for selecting a third telco player.

Rio was the commissioner of the National Telecommunications Commission in the early 2000s. It was during his tenure that Sun Cellular’s operator Digital Telecommunications Philippines— eventually bought out by PLDT—was given authority to provide mobile cellular services. In other words, Rio was at the helm of breaking up the duopoly of PLDT/Smart Communications and Globe for the first time.

“I allowed it despite the objections of Globe and Smart,” Rio, a former general with the Armed Forces of the Philippines, said in an interview.

The terms of reference for a third player are now being drafted and will be out by Feb. 19, 2018. The government is targeting to select a new telco challenger, which will be awarded all currently available radio frequencies, by the first half of year.

“This is my last hurrah,” Rio said.

He pointed out that more competition is needed in the Philippines. He also insisted that the telco operators, in an effort to maximize earnings, had been remiss in their investments to upgrade service quality.

Underspending allegations remain contentious and are disputed by PLDT and Globe. Third-party experts also blame the prevailing government policy, which left all investment decisions in the hands of the operators.

Telco industry supporters argued this was the mark of the private sector’s resilience in an environment with minimal government support. Critics call it a cautionary tale of surrendering too much power to private interests.

The last significant effort to invest in public telco infrastructure, the National Broadband Network during the Arroyo administration, was scrapped in 2007 under a storm of corruption allegations.

High entry barriers, like securing a congressional franchise, apart from decades-old regulations, protect telco industry incumbents. And then there is the high cost.

Data compiled by the Inquirer from annual reports starting 2000 through 2016 showed that PLDT, partly owned by Hong Kong’s First Pacific Group, invested more than P470 billion in capital expenses while Globe, part of Ayala Corp., had spent about P380 billion. (Spending remains high until 2018 as telcos allocate more funds to upgrade their mobile and fixed-line networks).

The duopoly has extracted immense profits as well. During this same period, PLDT has rewarded shareholders with more than P380 billion in cash dividends while Globe has paid about P135 billion.

Their foreign strategic partners—Singapore Telecommunications (Singtel) for Globe and Japan’s NTT Group for PLDT—are likely pleased with their returns.

Even with declining yields, PLDT posted an Ebitda margin of 39 percent as of end-2016, better than the 31.9 percent of NTT DoCoMo, which competes with three other firms in Japan. Ebitda or earnings before interest, tax, depreciation and amortization is a measure of a company’s profitability. 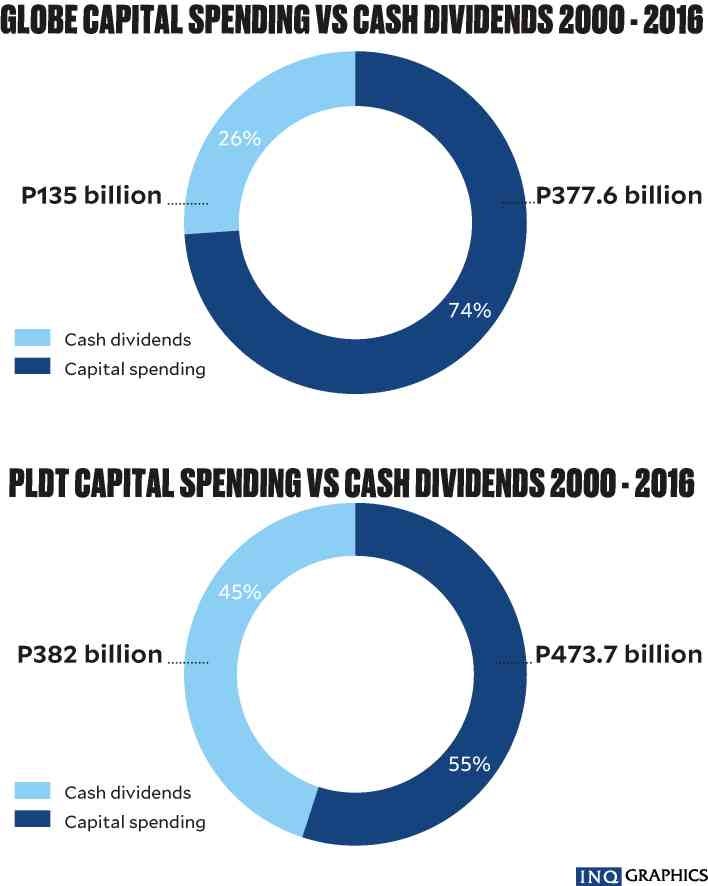 Globe posted an Ebitda margin of 42 percent for the same period, better than the 29.6 percent for Singtel, which also has three competitors in its home market.

In the mid-2000s, domestic industry Ebidta margins were above 60 percent.

The public balks at these profit figures when compared to service quality versus costs.

Research firms BDRC Continental and Cable.co.uk compiled data on broadband pricing as of October 2017. Across 199 jurisdictions, the Philippines stood at No. 90 with an average monthly broadband expense of $53.45. Rates here were a third cheaper than Indonesia but more expensive than Singapore by 34 percent and double the rates in Thailand.

A second report compiled by cable.co.uk in 2017 said the Philippines was also behind most regional neighbors in terms of internet speed. Based on its data, film buffs in the Philippines, with an average speed of 3.7 Mbps, need to wait about 4.5 hours to download a high-definition movie, 50 percent longer than Vietnam’s and four and a half times longer than Thailand’s. In Singapore—which had the fastest speed in the study—that same movie would take about 18.5 minutes to download.

China, which is President Duterte’s preferred telco partner, fared poorly in this test, taken over 12 months through May 2017. With an average download speed of 1.55 Mbps, it would take close to 11 hours to download the same film.

Crowd-sourced surveys like OpenSignal, meanwhile, showed big improvements here in terms of mobile internet speed, reflecting heavy investments made by the telcos in this area.

There are similarities in the conditions surrounding the entry of a third player in 2018 versus Sun Cellular’s debut in 2003.

Sun Cellular entered when text messaging, then the hot service, was a well-established money machine for PLDT and Globe.

It launched when mobile phone penetration was below 30 percent, leaving a large enough market for a new competitor to tap.

Sun Cellular immediately disrupted the industry by offering unlimited promos and bucket rates, scooping up new customers and prompting Globe and PLDT to follow suit in 2005.

Internet services for video streaming, instant messaging and social media are the “killer applications” of this age and demand continues to surge.

Just like text messaging in the early 2000s, the business prospects for high-speed mobile internet are clear and have yet to reach its saturation point. The latest Ericsson Mobility Report noted that penetration for LTE or 4G services in the Philippines would still be around 40 percent in 2018.

Another vast, untapped market is fixed-line broadband and the looming shift to 5G technology.