Stock price index a point away from 9,000 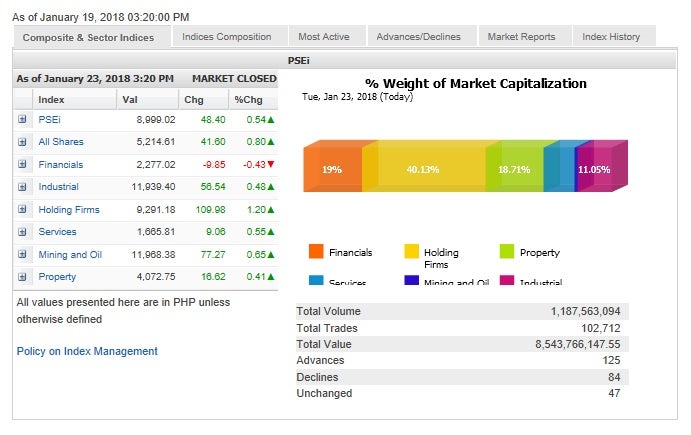 The local stock barometer surged to a new high on Tuesday—closing a hairline away from the 9,000 mark—as investors scooped up equities that fell following the report of slower-than-expected fourth quarter Philippine economic growth.

The PSEi advanced for the third straight session and marked its fifth record finish this 2018. Since the start of the new year, the index has gained another 5.1 percent, after rising by 25 percent for the whole of 2017.

Philippine GDP grew by 6.6 percent year-on-year in the fourth quarter, slightly lower than the market consensus of 6.7 percent. In morning trade, the PSEi shed 31.95 points, or 0.36 percent.

“When they thought that it’s just a small difference, investors resumed buying (in the afternoon). There’s really a lot of money and investors are just waiting to buy on correction,” Roxas said.

However, Roxas said 9,000 still appeared to be a strong resistance level. On the downside, the next support level is seen at 8,700.

But any market weakness, Ravelas said, would only be short-lived as the fourth quarter corporate earnings season would start by February.

The market was led higher by the holding firm counter, which gained 1.2 percent. All other counters advanced, except for the the financial counter.

Value turnover for the day stood at P8.54 billion. Foreign investors supported the day’s upswing as there was P264.82 million in net foreign buying.

There were 125 advancers that edged out 84 decliners while 47 stocks were unchanged.

Read Next
PNB to issue up to P20B in high-yield debt notes
EDITORS' PICK
No arrest yet of motorcycle taxis despite termination of pilot run
‘A greener, cleaner tomorrow’: A how-to guide for Filipinos who want to help with today’s energy crisis
Senators think TWG’s move to axe motorcycle taxi pilot run an act of ‘revenge’
Ex-aide of Imelda Marcos is New York’s No. 2 tax cheat
San Mig Light celebrates its 20 years in Poblacion
Motorcycle taxis ‘illegal’ starting next week — LTFRB board member
MOST READ
James Reid, Nadine Lustre confirm split
Motorcycle taxis ‘illegal’ starting next week — LTFRB board member
Palace: Crisis over ABS-CBN franchise unlikely
ALI bares facts on Technohub deal: P4B in lease to UP, P171, not P22, per square meter per month
Don't miss out on the latest news and information.