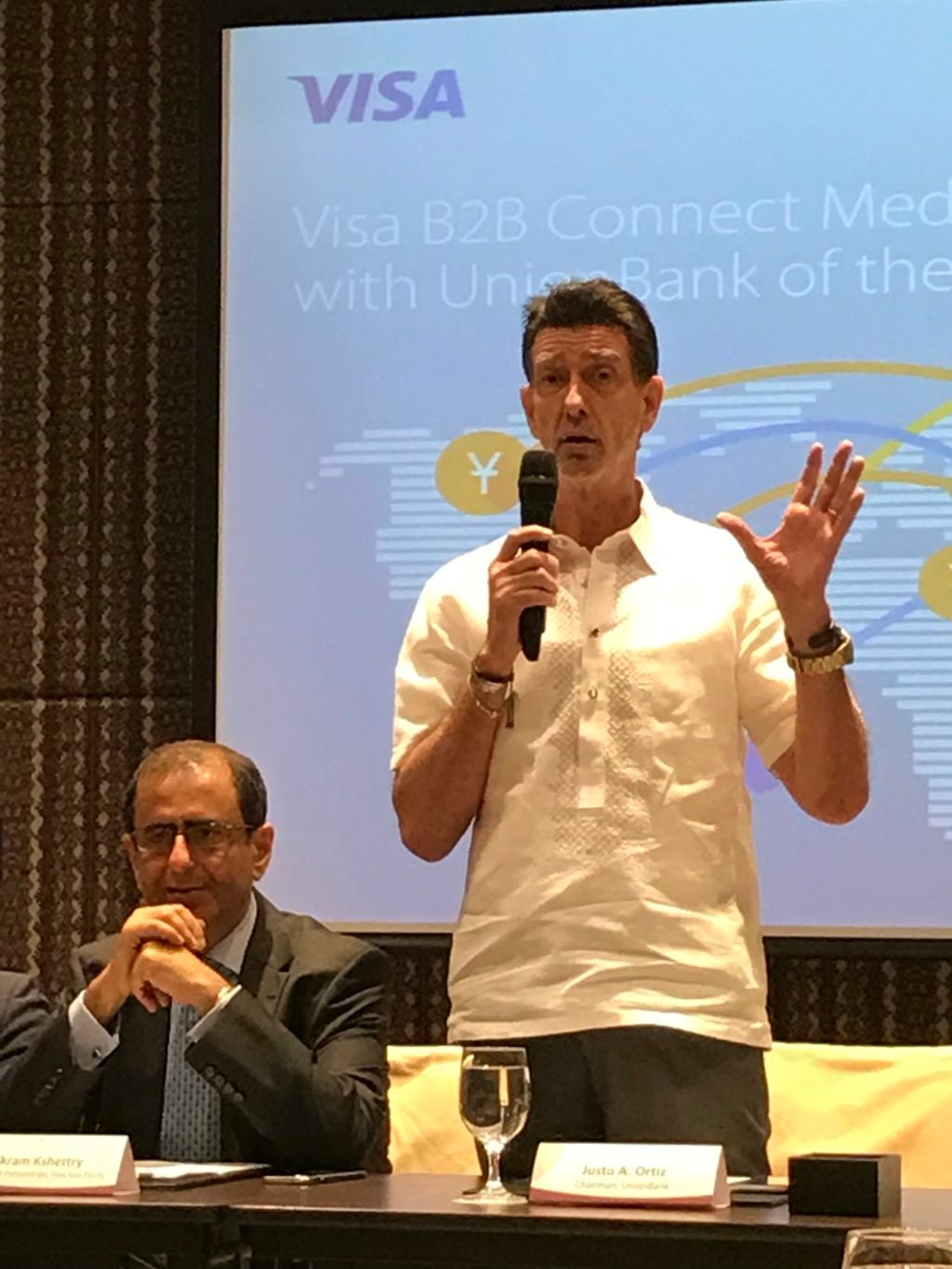 As the rise of digital money threatens to disrupt global payments system, traditional financial institutions are fighting back by riding on the same game-changing technology that enables the trading of cryptocurrencies, making cross-border funds transfers easier and cheaper, especially for small and medium enterprises.

Aboitiz-led Union Bank of the Philippines—an institution that deems itself as a bank and a technology company rolled in one—has become the first bank in the world to pilot test with global payments solutions firm Visa a new platform for cross-border B2B (business-to-business) payments using the blockchain technology.

Visa and UnionBank announced on Monday the successful pilot of bank-to-bank cross-border payments using the Visa B2B Connect platform ahead of the commercial launch of this new B2B solution by the third quarter of this year.

UnionBank is thus among the handful of institutions selected for Visa’s global pilot program, which also includes Commerce Bank in the United States, Shinhan Bank in South Korea, Sberbank in Russia and United Overseas Bank in Singapore. It was also the first among these banks to conduct a successful B2B pilot.

“Visa B2B Connect takes on an innovative approach and eliminates friction for cross-border transactions by using distributed ledger technology to enhance the speed, security and reliability of these transactions,” said Vikram Kshettry, head of B2B partnerships at Visa Asia-Pacific.

The technology referred to is blockchain, a digitized, decentralized, public ledger that records all transactions in chronological order, providing central record keeping that financial technology companies use to facilitate the exchange of cryptocurrencies—the most popular of which is bitcoin—without having to use the existing payments infrastructure used by banks and traditional institutions.

For now, however, Visa B2B Connect will not process any exchange of cryptocurrencies and only allow this to be a platform for official currencies or fiat monies that governments recognize as legal tender.

UnionBank chair Justo Ortiz explained that this would use the same blockchain technology to offer an innovative new payments solution that still operated within a trustworthy governance framework and benefited from the back office processing and accounting departments of reputable financial institutions.

“Interoperability is a big consideration and this is what Visa already has on scale and globally—and that makes this very real, very possible and very workable but enhancing the trust that we have, enhancing the productivity and efficiency of the bank, enhancing customer experience and at the same time, allowing us in UnionBank to build our capability working with a world-class organization like Visa,” Ortiz said.

Moving money around the world has been a favorite target of fintechs because very little has changed in the global payments system for many years, Union Bank president Edwin Bautista said.

“This is a prime example of a situation where the incumbents actually harness technology to find a solution for their customers…We, of course, collaborate with fintechs but the popular notion is they will disrupt us or force us to get out of this business,” Bautista said.

But while fintechs have been able to use blockchains, Bautista noted that the solution to facilitate the flow of money has been to ride on cryptocurrencies like bitcoin.

“We’re not against bitcoin. Many of us love bitcoin. I actually own bitcoin. But not everyone trusts bitcoin,” Bautista said.

“So you now have a situation wherein if we can do the same thing, and in this case ride on the blockchain but have an existing infrastructure to be able to move money, in this case (using) the Visa rails, then you actually have a much better and a superior solution,” he added.

This solution seeks to address nagging issues on governance and money laundering that hound the world of cryptocurrencies.

“Here you have a perfect situation because banks are already dealing with each other via Visa rails. We have KYC (know-your-customer) footprints all over the world. It’s only a question of using new technology, using blockchain to enhance a rail that’s already there,” Bautista said.

“This is powerful force that’s very difficult to replicate. It debunks the common notion – well I don’t believe in this notion – that the banks and the incumbents are very slow (in embracing innovation). They are not slow. They are here and this is an example,” he added.

Apart from using blockchain and API (application of programming interface) platforms of Visa, this solution may use artificial intelligence in the future, Ortiz said.

“The end result of this is that we would have straight-through processes where a customer can initiate and fulfill his payment transaction on a B2B basis – so this is commerce – any amount, even small amount (among) small enterprises, medium enterprises even large enterprises. Over time, because Visa is publishing its API, we can develop using our own customer experience (solutions) specific to our customer needs,” he said.