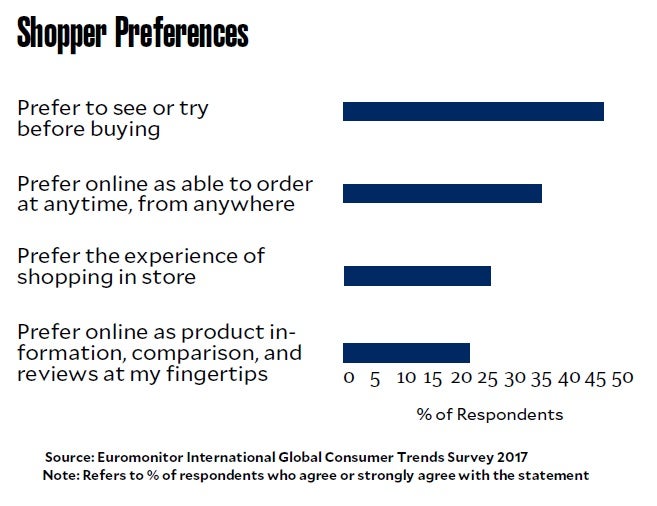 Adaptive entrepreneurs, sleuthy shoppers, clean lifers, and borrowers—these are some of the types of consumers which brands can expect to deal with this 2018, says a recent trend report by global strategic market intelligence company Euromonitor International.

Titled “Top 10 Global Consumer Trends for 2018: Emerging Forces Shaping Consumer Behavior,” the report, authored by Euromonitor International’s head of lifestyles research Alison Angus, zeroes in on how consumers will question their values, priorities, and purchasing decisions, thanks to access to mobile and internet technology—and how this will continue to disrupt businesses, particularly when it comes to how they engage consumers on issues that truly matter to them.

1.) The Clean Lifers: These are the educated 20- to 29-year-olds, says the report, who have strong beliefs and ideals, are less tolerant, more skeptical, and feel they can make a difference.

Clean lifers’ most distinct characteristic is their ability to say no—to drugs, alcohol and other unhealthy substances; to animal-based products; and to uninformed spending.

2.) The Borrowers: These consumers prefer access—not ownership. They are “cash-strapped… want more flexibility and freedom in their lives, and less baggage. Rather than aspiring to things, they favor minimalism and living for the moment,” the report reads. These are the people who make the most out of shared and on-demand services, such as Uber and AirBnB.

A driver of this trend is urbanization, the report says, with the majority of the world’s population (55 percent) living in cities in 2017.

3.) The Call Out Culture: This trend has given rise to activist consumers airing out their grievances on social media. The most recent example of this is the #MeToo antisexual harassment campaign, which garnered over 12 million comments and reactions in just a day (on Twitter, the hashtag was used a million times in just 48 hours).

Such consumers are not afraid to share their opinions on brands online. Citing a survey by social media management software developer Sprout Social, the report says that “46 percent of US consumers voiced an opinion about a brand online. Also, when they saw a complaint on social media, 65 percent of consumers said they would research the brand before buying it, while 32 percent would reinforce the message by liking or sharing it. A poor brand response was most likely to lead to a boycott by the consumer (50 percent).”

With this kind of consumer, quick and effective response is the crucial for businesses, the report reads.

4.) It’s in the DNA—I’m So Special: This trend is all about people’s growing curiosity about their genetic makeup, and the rising interest in personalized health and beauty products, such as home DNA kits.

“A new wave of companies aims to provide ‘I’m so special’ consumers with genetic findings related to their general health fitness and nutrition. The likes of FitnessGenes, DNAFit, Orig3n and Nutrigenomix identify genes that affect muscle mass, endurance, fat burning ability and metabolism,” the report reads. “They can tell how well consumers tolerate caffeine, and whether they are likely to be lactose-intolerant or deficient in certain types of vitamins. Some offer personalized training and nutrition plans based on their findings. Others combine genetic testing with other methods to give a better overall picture of health.”

It’s a market that’s still in its infancy, but, citing data from market research consulting firm Credence Research, Euromonitor’s report says the global market for genomics is “burgeoning,” and could be worth $340 million by 2022.

5.) Adaptive Entrepreneurs: Consumers who prefer more flexible lifestyles and therefore veer away from traditional 9-to-5 careers. In last year’s Global Consumer Trends Survey, Euromonitor found that across all generations, almost half of the respondents expressed a desire to be self-employed. These people aren’t just looking at their financial gain; they want their personal interests and passions to be aligned with their livelihood.

6.) View in My Roomers: Augmented reality (AR) takes center stage with this trend, which will be fueled by the introduction of more sophisticated smartphones this year with better AR functionality.

The report lists a few brands as examples of those already using AR to enhance consumer experience: Urban Decay and Sephora, for trying on beauty products and accessing makeup tutorials; Ikea Place, which enables consumers to see true-to-scale 3D models of furniture in their rooms; and Dulux Visualiser, which lets consumers see how their walls would look painted in the brand’s colors.

This type of consumers, states the report, will be looking for more immersive “try before you buy” shopping experiences. Businesses should expect more AR apps and devices to go mainstream this year.

7.) Sleuthy Shoppers: Otherwise known as “investigative” consumers, this group “looks for evidence of fair trade, environmentally friendly production, fair wages… and energy-efficient distribution. They would ideally like to understand—preferably through video evidence—all the poignant, tangible steps of the product’s journey,” the report states. “Sleuthy shoppers are no longer just buying a product, they are buying its entire history and everything that it represents.”

Brands, therefore, should build trust between them and these consumers simply by being honest and real. According to the report, once this trust is established, sleuthy shoppers become loyal customers.

8.) I-Designers: Personalization is key for this type of consumer. For these people, it’s all about making products their own, without exerting too much effort. They’d like to be involved, somehow, in the production process, in order to end up with truly customized purchases which reflect their unique styles.

“Technology companies have been applying this creator concept to services, ranging from Instagram filters to customizing photo albums, creating books, and wedding invitation designs,” the report reads. “However, applications in the consumer goods world must mix creative experience and technology.”

It’s a trend that is more evident in markets with progressive startup landscapes and high rent costs, such as Asian urban hubs like Singapore and Hong Kong. Given this, the report notes that co-living is still a niche trend, and will manifest itself this year in demand for small urban rental spaces and more young professionals staying in student homes.

10.) The Survivors: This pertains to the frugal mindset of consumers, because “despite improving economies, rising incomes, and falling unemployment, the gap between rich and poor is highly visible, and those caught between low pay/meager state benefits and high living costs are still struggling to cope with austerity,” the report states.

This trend leads consumers to resale shops, grocery discounters, and value-based retailers (stores that buy in bulk directly from factories and surplus stock)—which are now expanding their global reach. Daiso, for one, had 2,800 stores in Japan and over 4,000 worldwide by the end of last year, according to Euromonitor.

“By catering to the poverty-stricken or price-sensitive, deep discounters are among the only retailers that have proved resilient to the rise of internet retailing, and are a disruptive force in retail,” says the report.