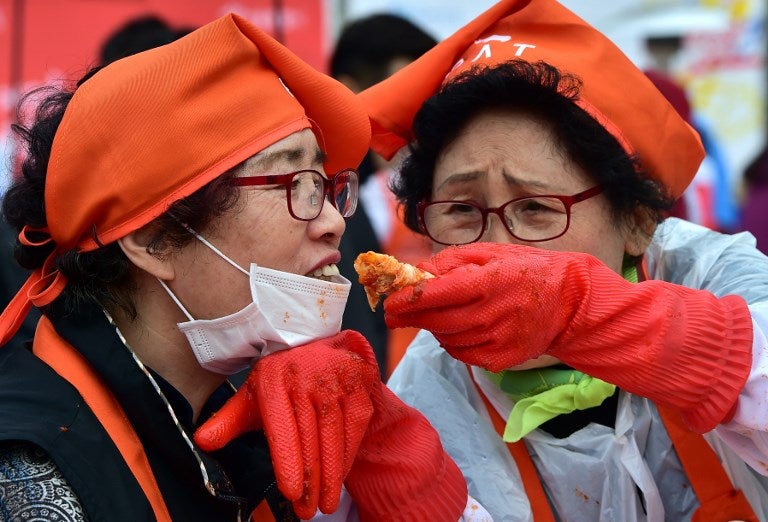 Participants taste kimchi as they take part in a kimchi making event during the Seoul Kimchi Festival outside the city hall in Seoul on November 6, 2015. The kimchi produced during the event is distributed among South Korea’s poorer households. Kimchi is a traditional Korean dish of spicy fermented cabbage and radish. AFP FILE

The spicy foodstuff is emblematic of Korean cuisine and accompanies almost every meal served in the country, whatever its culinary origins, with kimchi-making still an important annual ritual for many families.

But the commercial market has been deluged by Chinese producers in recent years, resulting in what has been dubbed the “kimchi deficit”.

South Korea imported more than 275,000 tonnes of kimchi last year, 99 percent of it from China, the Korea Customs Service (KCS) said, and exported just over 24,000 tonnes.

The deficit stood at $47.3 million by value, up 11 percent year-on-year and the largest since the KCS began tracking the data in 2000.

Price is a major factor in the trade, with imports costing just $0.50 per kilogram in 2016 according to Korea Agro-Fisheries & Food Trade Corp., while exports — primarily destined for Japan — averaged $3.36 per kilogram.

According to South Korea’s World Institute of Kimchi, 89.9 percent of the kimchi purchased by South Korean restaurants in 2016 was imported from China.

The kimchi trade first went into deficit in 2006, triggering soul-searching and a headline-grabbing scandal.

Kimchi-making “reaffirms Korean identity and is an excellent opportunity for strengthening family cooperation”, it added, and a reminder that human communities need to live in harmony with nature.

There are regional differences in the product, UNESCO added, and the specific methods and ingredients are considered an important family heritage, typically transmitted from a mother-in-law to her newly married daughter-in-law. /cbb