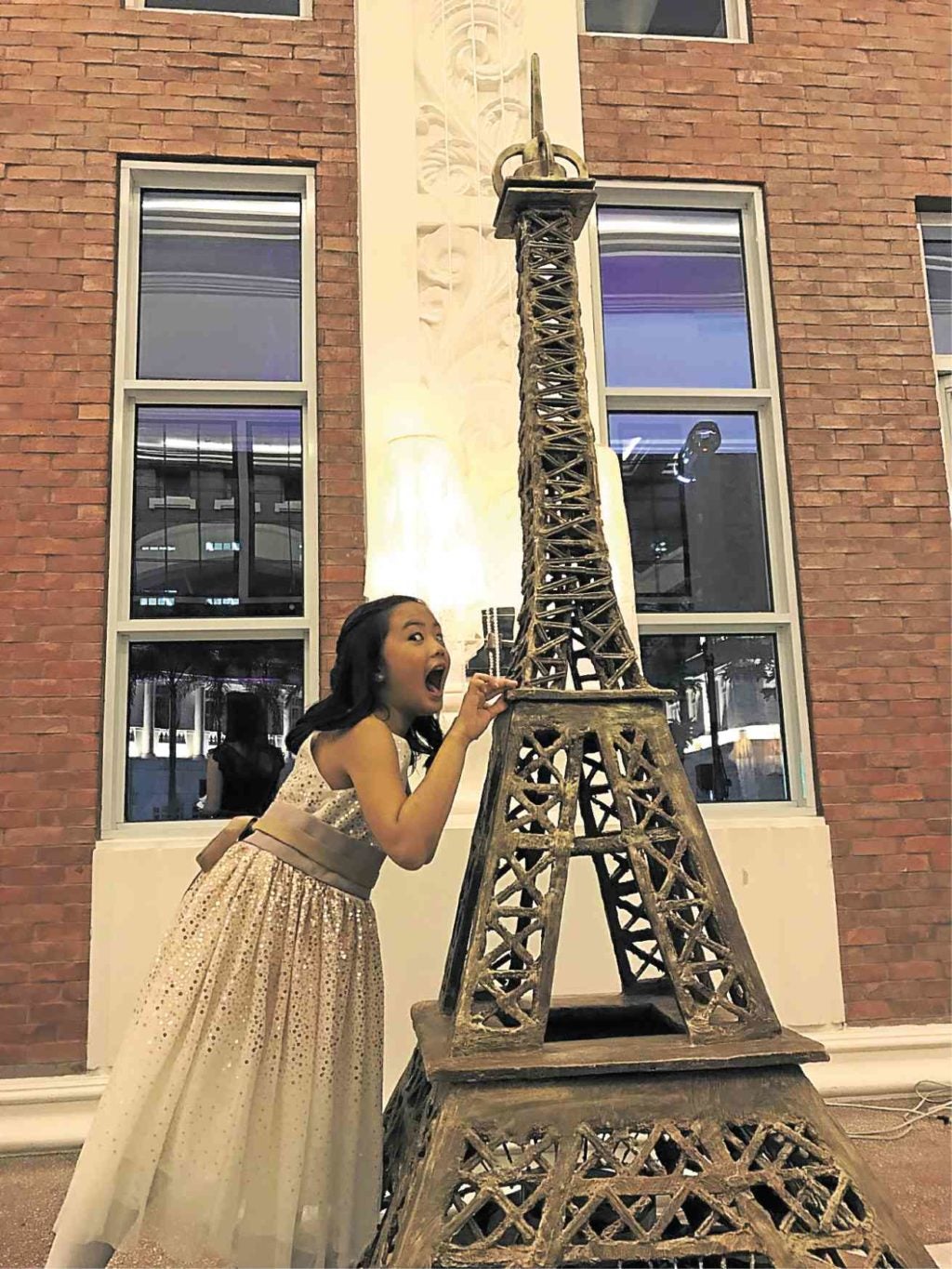 When any of my friends get married, my gift is always the wedding cake.

But for my one and only sister Goldee Salcedo’s wedding last weekend, where I was Goddess of Honor (I didn’t want to be Old Maid of Honor), I didn’t want just a cake.

After the magnificent proposal by her then-groom, now-husband Nico Garcia atop the Eiffel Tower, I wanted a giant Eiffel Tower dessert for the wedding, the top of which you couldn’t reach.

For a while, I thought this idea would not materialize. I was told by various suppliers that they would create something using styrofoam and then cover it with fondant, which was unacceptable.

Enter James Antolin, one of the ‘Yodas’ of Pastry Alliance of the Philippines, whom I met a few years ago at the Bocuse d’ Or competition in Lyon. I asked him if he knew anyone who could carve chocolate into something naughty for the “titillating”—pun intended—second bridal shower I hosted for Goldee. He said he couldn’t do it but knew someone who could, and recommended chef Chris Balane, the chocolatier of Marriott Manila.

But after seeing the work of chef Chris on Instagram (follow @christopherbalane), I knew I couldn’t ask him to just create something titillating for a bridal shower.

If you check out his page, you will see his amazing works at various chocolate-making competitions. He created an unbelievably real-looking samurai warrior for the Food and Hotel Asia chocolate art competition in Singapore, where he bagged Silver. He also created a Darth Maul versus Darth Vader chocolate showpiece for the Hotel Food Expo in 2015 in Hong Kong. He also created a giant Optimus Prime for the 2016 Philippine Culinary Cup.

His attention to detail is incredible! Other pieces are even covered in cocoa coloring so they really come alive.

So instead, I asked him if he could make my dream six-foot tall Eiffel Tower for Goldee’s wedding.

On the wedding day, I couldn’t believe my eyes. Chef Chris went beyond my request and created a 10-foot tall chocolate Eiffel Tower with gold dust! It was truly surreal.

Only the base of the structure had wood covered in chocolate, just to keep it secure. The rest, all the way to the top of the tower, was pure chocolate—and delicious, too, because chef Chris used Felchlin!

In fact, guests were picking chocolate off the tower and eating the chocolate bars during the reception. Somehow, it went well with the cocktails from Proof Mobile Bar. Blame it on the theobrama and alcohol, the guests danced past midnight!

The chocolate Eiffel Tower became the centerpiece at the cocktail reception area—The Atrium at Enderun—and everyone had a blast having photos, boomerangs and Instagram stories with it.

I asked chef Chris how he created this masterpiece. He had actually already created one in 2014 for the Marriott but it was only around two feet tall. He had never done anything this big.

For Goldee and Nico’s wedding, chef Chris used 20 kilos of Felchlin chocolate and worked on the structure for 3 days (in between his other duties at the Marriott) or give or take 30 hours.

His process is remarkable. He starts with a photo of the piece. Then he does his measurements and calculations. For this piece, there was no mold so he had to make the carvings after the process of melting, tempering and cooling the chocolate.

He has the unique ability of carving by ouido (as in music, playing it by ear), having learned the skill from an old carver surnamed Baldemor from Paete, Laguna, back in the 1990s when he worked in Manila Hotel.

The wedding cake was likewise a hit. This was made by chef David Socrates, cake artist of Marriott Manila.

I love how cake artists nowadays allow you to put touches on the cake that are relevant, even nostalgic. For Goldee and Nico’s wedding cake, I requested the Eiffel Tower and the facade of the Magallanes Church, because this is where the couple met and have been serving for decades. Chef David also went beyond by lighting up the tower—just like in Paris at night!

He also had the idea of covering some space with a quote. I chose “All you need is love. Love is all you need.” This was the song that was played when the couple was pronounced husband and wife by His Eminence Manila Archbishop Luis Antonio Cardinal Tagle.

At the back of the cake, there was also a rendition of a Benz that was a gift from the father of the bride; and also a cameo by the bride and groom’s godson (goddog?), Stardust.

The bride chose carrot cake for the base and it was yummy, too! Chocolate with caramel would have been my choice.

Chef David actually has wedding cakes lined up every day—sometimes even two cakes a day. He now has a team of five helping him because there is just too much work. But the results are just incredible! 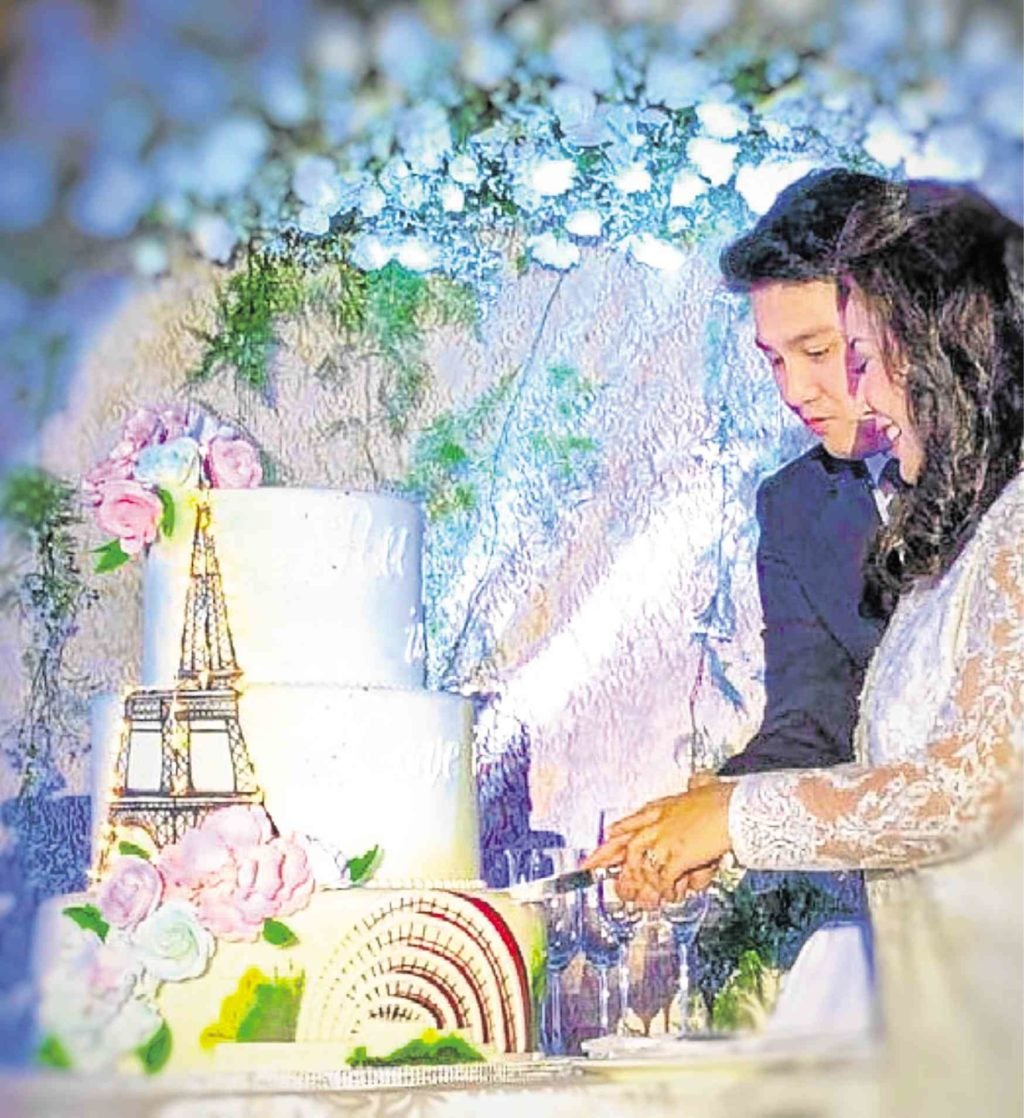 The wedding cake by Chef David Socrates of Marriott Manila contained a lighted Eiffel Tower where the groom proposed, the facade of Magallanes Church where the couple met, and the lyrics to the couple’s wedding song All You Need is Love. At the back of the cake: Art of the Benz gifted by the father of the bride and the bride’s family dog, Stardust.

Chris and David both work under Meik Brammer, executive chef of Marriott Hotel Manila. The Marriott website regards the latter as someone who does not compromise on quality. After seeing the work of chefs Chris and David, I can attest to that.

I don’t think there is any other hotel that can give you this level of chocolate and pastry art.

The best part is that you can order their cakes even if you have your event at another venue. Goldee and Nico’s wedding reception was at the gorgeous gardens of Enderun at the Fort.

If you want the 10-foot tall tower, though, it would be best if you have your event at Marriot’s Grand Ballroom and not outside. It was a tough challenge bringing it to Enderun. But we found a way … sometimes all you need is love!

For celebratory cakes by Marriott Hotel Manila, call trunkline (02)9889999 and ask to be connected to the Marriot Cafe Bakery.