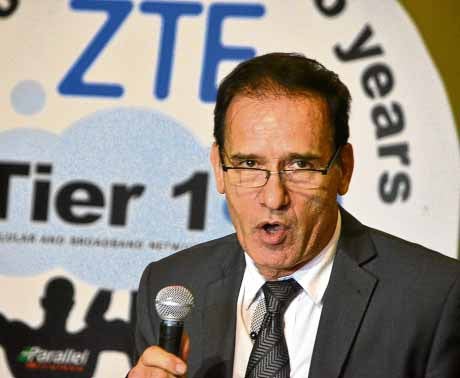 DAVAO CITY—A Chinese telecommunications and data services giant has partnered with a Davao-based telco to put up some 50,000 microcell towers across the country over the next five years.

Shenzhen-based ZTE Corp. is among five members of a consortium pledging up to $2 billion (close to P100 billion) to connect the country’s islands with microcell towers and help boost internet connectivity through TierOne Comm International.

A microcell tower has a signal radius of 38 kilometers.

“About 60 percent of the Philippines has no telecommunications whatsoever, with (the country) being mentioned in press reports as second worst in Asia. That should not be the case,” Jonathon Bentley-Stevens, TierOne board chair, told reporters here on Thursday.

Aside from ZTE, Nokia and New Hampshire-based Parallel Wireless are also part of the consortium.

“We are on the shoulder of giants,” Bentley-Stevens said, referring to members of the consortium.

ZTE was involved in the 2007 National Broadband Network deal controversy. (See What Went Before on this page.)

Bentley-Stevens’ announcement comes as Malacañang encourages a third player in the country’s telecommunications industry to break the duopoly of Globe Telecom and PLDT, and thus improve internet speed and connection reliability, and lower costs.

Bills have been filed in Congress that would amend the Public Service Act and remove telecommunications from the list of services defined as a public utility, in which foreign ownership is limited to up to 40 percent.

Recent moves to amend the 1987 Constitution could also lift restrictions on foreign ownership of telcos.

Bentley-Stevens said investor-partners from South Africa, China, the United States and Australia would pool an initial $500 million for the installation of towers in a region in Mindanao and in schools, police stations and military camps.

The Australian businessman, who identified himself as a longtime Davao resident, said his company’s partners were known network builders, cell phone and cell tower manufacturers, and other related technologies.

“While our focus is in Davao City, we agreed to [heed President Duterte’s] request to commence operations in underserved areas, particularly in Mindanao,” Bentley-Stevens said.

He said the Autonomous Region in Muslim Mindanao (ARMM) would be the first site of the project’s rollout late this month.

The connectivity, he said, would benefit 52 government buildings “to bring them up to international high-speed status.”

The project would then cover the rest of Central Mindanao, every area of southern Philippines, and eventually the entire country before the end of Mr. Duterte’s term in 2022, he said.

Marawi City was supposed to be the pilot area for the project, but five months of fierce fighting between government forces and Islamic State-affiliated fighters prompted the telco to choose the office of the ARMM governor compound in Cotabato City instead.

The consortium, Bentley-Stevens said, also planned to provide free internet technology and other vital infrastructures and facilities to the education, disaster response and security sectors.

“We have a program committed to education to put up a minitower at every school, a minitower in every police station, every first responder’s station and in (military camps),” he said.

These towers, according to the TierOne chair, need to be disaster proof, self-contained and have solo backup for at least three days, so that the first responders to any major untoward incident are able to connect with other allied agencies and respond to any threat whether natural or man-made.

He said the “gigantic undertaking” would be helpful in driving down prices of calls and text messages even as he acknowledged the consortium  was facing established giants Globe and Smart Communications.

“We have the advantage of putting up pieces of equipment that cost less,” Bentley-Stevens said, adding these facilities are to be shipped from Israel and the United States.

Starting in 1999 as a second-level reseller of triband cell phones, TierOne expanded into providing wireless network, according to its company briefer.

It initially talked with then ARMM Gov. Zaldy Ampatuan to roll out a wireless network in the region, including Maguindanao.

While the talks were going on, TierOne conducted a mapping of the region for its connectivity project.

But the talks abruptly ended when the Maguindanao massacre took place in 2009.

On July 21 last year, TierOne finally got its certificate of registration with the ARMM’s Board of Investments for a 25-year franchise for a totally new cellular and broadband network for the five-province region.

“We’ve been here for a long time without significant results so this is our last best shot,” Bentley-Stevens said.

Fjell is TierOne interim CEO and member of the board.