India is the top remittance receiving country in the world; PH third 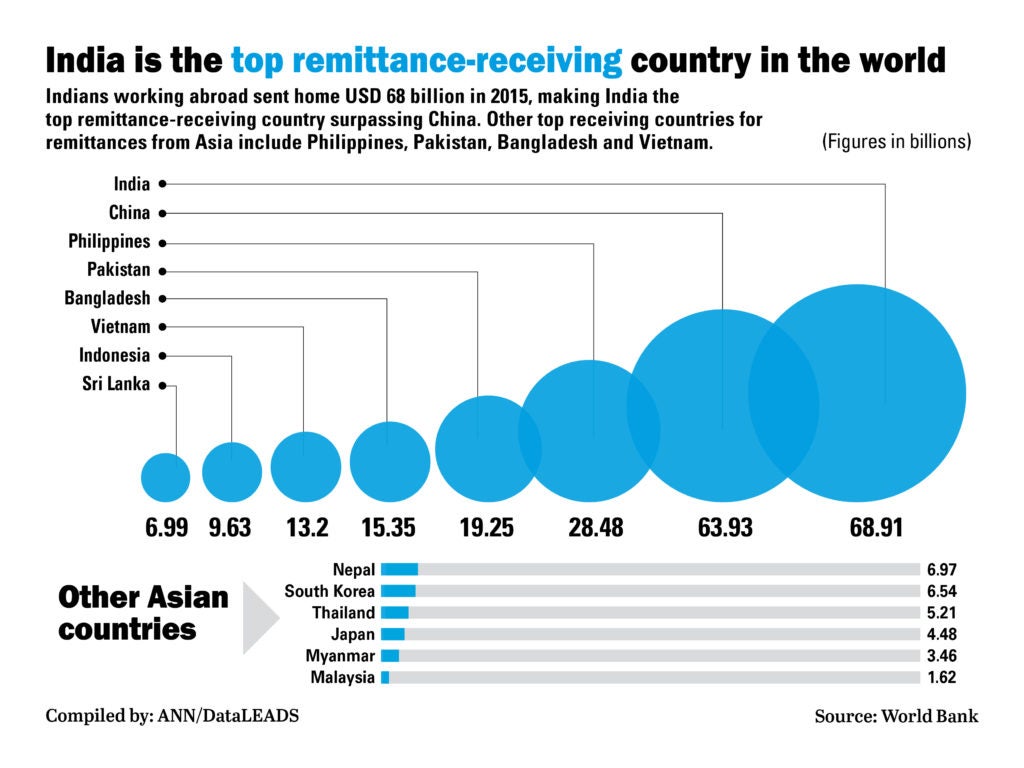 Indians working abroad continue to send more money home than their counterparts from other countries, according to the World Bank figures on migration and remittances. India topped the list with $68 bn of remittance inflows, followed closely by China ($63.93 bn).

Philippines is the third highest remittance receiving country in the world. Remittances are a mainstay of Philippine economy as they are seen as a “driver of ‘domestic demand ’in the country.

Pakistan usually sees a high remittance inflow from all over the world and economists state that the remittance inflow increases during the holy month of Ramazaan when Pakistanis around the world send home high amounts of money for charity and donations as well.

Remittances are a major contribution to Bangladesh’s economy and it has increased over the years as many Bangladeshi emigrant workers significantly soared.   Vietnam is at sixth position and remittance market in Vietnam is growing steadily.

Considered as low skilled workers the remittances from Indonesians around the world are seen as a buffer to the country’s balancing payment.

Sri Lanka depends on remittances for it is the second largest source of external financing in the country. It is the eighth highest remittance receiving country in Asia.

For Asian countries, the most remittance inflow is from the Gulf area which has been a key destination for South Asian workers especially.  According to the UN, Asia is the highest remittance originating region with 77 million migrants; with 48 million remaining within the region.  Remittances are seen as crucial to help the Asia’s developing countries achieve the Sustainable Development goals for their impact on global economy and political landscape.

Worldwide more than 200 million people live and work outside their countries.