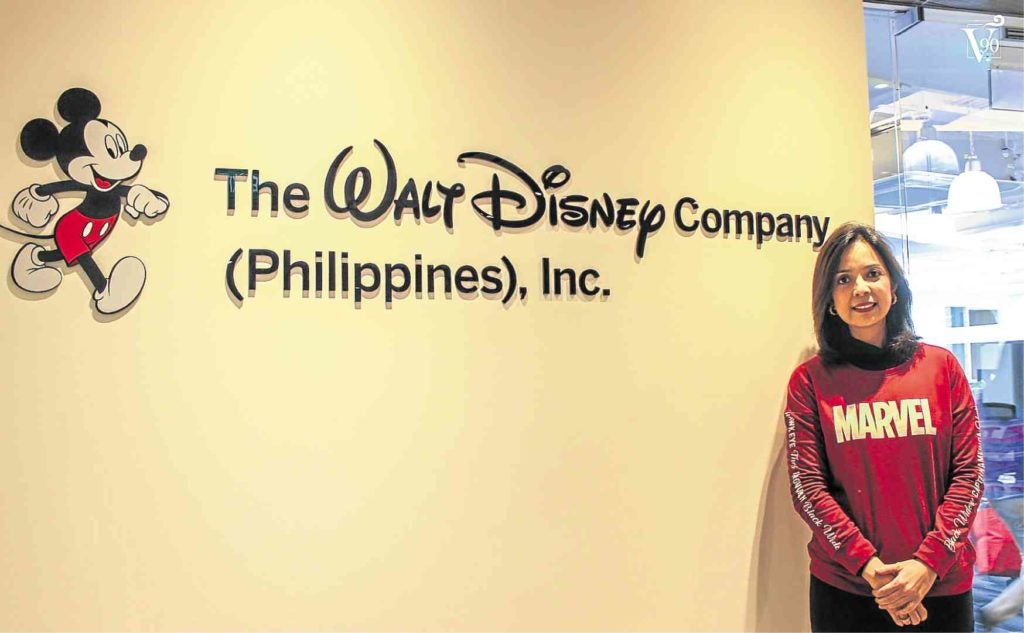 Competition is a distraction; focus on your strengths, and you’ll stay on top.

Such is the mindset of the people behind The Walt Disney Company (Philippines) Inc., which helps them maintain their brand leadership—whether it be in entertainment, consumer products or events.

“What we do is to really work with partners that could really help us provide the reach [that we want]. We create products and we work closely with the partners on the reach and availability of these products in the market so that if you’re a fan, you’re not going go and buy or even download [other] products from [other] platforms,” says general manager Veronica Espinosa-Cabalinan.

As a brand, Disney, has, of course, no problem when it comes to its fanbase here in the country.

According to one of its market studies, of the Philippines’ 60 million internet users, 45 million are “unduplicated” fans of Disney.

In the region, the Philippines is also one of two priority markets, he adds.

“Filipinos have a natural resonance toward Disney and Marvel, whether it’s through music or characters,” says Cabalinan.

Among kids ages 3 to 11, top Disney character favorites for boys include Spiderman and The Avengers, such as Iron Man and Thor, take top spots. For the girls, it’s Sofia the First, followed by “Frozen” sisters Elsa and Anna.

As for the adult fans (18-29 years old), Spiderman and the rest of The Avengers still remain favorites among guys, while women love good ol’ Mickey Mouse.

Another study found that the top five movies of all time here in the country are dominated by Disney and Marvel: “Beauty and the Beast,” “Captain America: The Winter Soldier,” “Avengers: Age of Ultron,” “The Avengers” and “Ironman 3.”

“Our focus now is building a local country structure,” says Cabalinan. “It’s not just having The Walt Disney Company in the Philippines, but also building the Filipino Walt Disney Company. Our goal is really for every Filipino household to have that opportunity to touch or feel the Disney brand.”

Localization is their key strategy, she adds, again, by forming partnerships with companies that share their values, to be able to widen their audience reach across the country.

Globe and SM are two such companies: with the former, one of Disney’s campaigns was “Disney Princess: I Dare to Dream,” a digital reality series that featured the journey of six young Filipino girls as they pursued their dreams, with a little help from various mentors such as Lea Salonga (this extended to the “I Dare to Dream” concert); as for the latter, Disney installations have become a key component of SM malls nationwide.

Disney is also involved in local community work. Just recently, the company launched “Time Please,” a volunteering program that encourages kids to take their families out to do social work.

“It’s about contributing in any way. That’s the best value we can give to the next generation,” says Kanthamraju.

Cabalinan adds that the company wants to reach more audiences in the provinces, not just big cities—hence the extra effort they put into their digital presence, especially on social media and mobile.

“Mobile is the key digital device. We’re building a team here in the Philippines to address the needs of our consumers. We also spend a lot of time on social media, so these are the things that we’re working on—to be present in to all types of platforms,” she says.

Asked for a specific number to indicate just how wide they wanted their audience reach to be, Cabalinan replied: “It’s not really a number. What we’re looking at is, when I go to Mindanao or in a place that’s far and … you talk to local people and they are aware of our brand, that becomes a metric for us that hey, they know our brand, they are familiar with our brand, they buy our brand.”