Market bounces back to 8,400 level 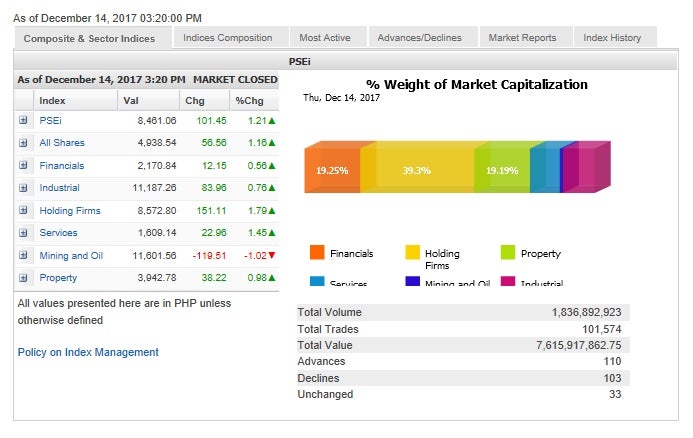 The local stock barometer surged back to the 8,400 mark yesterday as investors cheered the ratification of the first phase of the tax reform program, which is seen necessary to finance the Duterte administration’s massive infrastructure building.

The main-share Philippine Stock Exchange index (PSEi) racked up 101.45 points or 1.21 percent to close at 8,461.06. There was about P1.06 billion in net buying from foreign investors that perked up the main index.

“Both houses of the Philippines’ Congress ratified the Tax Reform for Acceleration and Inclusion (Train) bill late [Wednesday] night. This is a positive development and, barring any veto by the President, should be signed into law by 19 December,” Credit Suisse said in a research note.

“Net-net, the macroeconomic impact should be a slight cross between the Senate and the House bills. The final bicameral bill is slightly more supportive for headline private consumption compared with the initial House bill HB 5636,” the investment firm said.

Revenue yield should be quite similar with the House bill at around 0.6 to 0.7 percent of gross domestic product (GDP) in the first year, and rising to around 1 percent of GDP cumulatively by 2020, Credit Suisse said.

Except for the mining/oil counter, comprising sectors which will face higher taxes under the new framework, all counters at the local stock market gained.

The day’s biggest gainers were the holding firm and services counters, which respectively rose by 1.79 percent and 1.45 percent.

Value turnover for the day amounted to P7.6 billion.

There were 110 advancers that edged out 103 decliners while 33 stocks were unchanged.

The PSEi was lifted by the gains of GT Capital, which added 4.96 percent, while SM Prime and Metro Pacific both added over 3 percent.

Notable gainers outside the PSEi include Bloomberry, which surged by 6.67 percent, while Melco Resorts added 3.08 percent. CIC and Sun Life both rose by over 2 percent.

On the other hand, Ayala Land and Jollibee both fell by over 1 percent while Ayala Corp. also slipped.