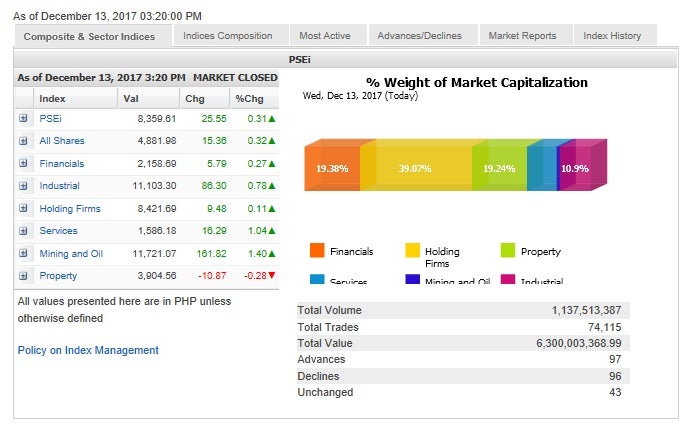 The local stock barometer firmed up on Wednesday as investors digested the local tax reform legislation and regional markets traded with mixed sentiment ahead of the US Federal Reserve policy statement.

The main-share Philippine Stock Exchange index (PSEi) added 25.55 points or 0.31 percent to close at 8,359.61 as investors factored in the expected passage of the first package of the country’s tax agenda.

The services and mining/oil counters led the PSEi higher with their over 1-percent gain while the financial, industrial and holding firm counters slightly increased. Only the interest rate-sensitive property counter slipped (-0.28 percent).

“All eyes are on the Federal Reserve, which kicked off its two-day policy meeting in Washington amid a backdrop of robust global growth and tepid inflation, a mix that has helped boost markets around the world to a series of record highs,” said Luis Gerardo Limlingan, managing director at Regina Capital Development.

On the local front, the PSEi was still grappling with a psychological resistance on its way back up, Limlingan said.

Value turnover for the day amounted to P6.3 billion.

There were 97 advancers that edged out 96 decliners, while 43 stocks were unchanged.

URC and parent firm JG Summit gained 4.17 percent and 5.15 percent, respectively, as investors expressed relief over the tax on sweetened beverages. The final version of the tax reform approved by the bicameral conference committee excluded milk, coffee and 100-percent natural juice products from a P6 tax per liter.

GT Capital and Semirara both rebounded by over 2 percent. Meralco also gained by 1.26 percent.

SM Investments fell by 1.52 percent. It was the day’s most actively traded stock.