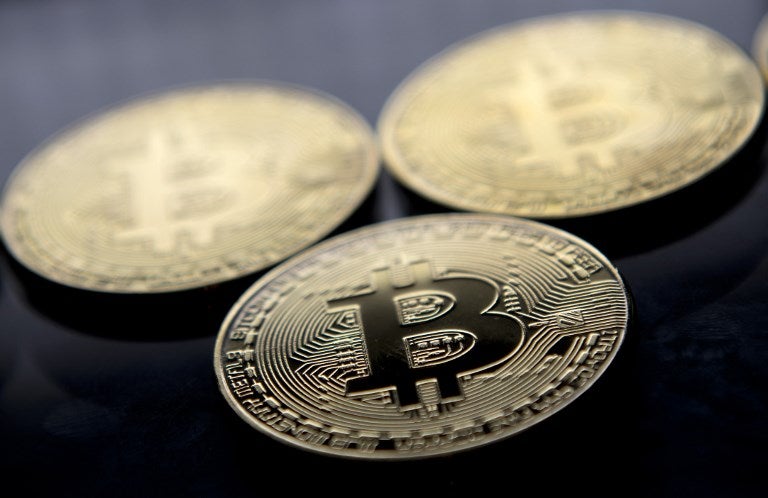 This file photo taken on November 20, 2017, shows gold plated souvenir Bitcoin coins arranged for a photograph in London. Bitcoin, which this week soared to a new record high of more than $11,000, is the monetary equivalent of Uber, since it bypasses central bank regulation and could be attractive for financially fragile countries, economists say. Nevertheless, it is precisely the lack of oversight that opens up the users of cryptocurrencies such as bitcoin to risks and dangers, analysts warn. AFP

PARIS, France — The vice-president of the European Central Bank on Wednesday expressed concern about the relentless rise in value of the virtual currency Bitcoin and the potential risk accompanying the trend.

“It’s a very particular asset, it’s a speculative asset by definition looking to the developments in its price. Investors are taking that risk of buying at such high prices,” Constancio told CNBC television.

Bitcoin smashed through the $10,000 barrier this week — compared with less than $1,000 this time last year.

The rise has taken the overall market capitalization of hundreds of so-called cryptocurrencies beyond $300 billion as demand for digital currencies soars.

Despite his warning, Constancio said he did not think Bitcoin’s extreme volatility would spread to other markets.

ECB President Mario Draghi said last October it was too early for the ECB to consider regulating virtual currencies.

Russia’s central bank has also notably warned of the potential losses investors may suffer if they put their hard cash into the crypto variety.

The boss of JP Morgan Chase has labelled Bitcoin a fraud, while China has closed down Bitcoin trading platforms and South Korea this week expressed concern the trend could lead young investors to become embroiled in fraud.

Even so, the virtual coin received a major boost last month when exchange giant CME Group announced it would launch a futures marketplace for Bitcoin, which has not been listed on a major bourse before. /cbb

Read Next
Power supplier faces franchise loss
EDITORS' PICK
Experience clearer calls nationwide with Smart VoLTE
Cagayan gov endorses 10-day ECQ in Tuguegarao due to COVID-19 surge
Driving can be even more rewarding this New Year — here’s why
New Year, New Rediscoveries
No warrantless arrests despite DND-UP accord termination, says PNP spox
Lorenzana defends decision to terminate UP accord: ‘Times have changed’
MOST READ
Proposed toll for newly opened Skyway 3 ranges from P110 to P274
Duterte to firms: No franchise until you settle your accounts with gov’t
‘Hotbed of recruitment’: Lacson backs termination of UP-DND accord
‘Thanks but no thanks,’ says Sotto on Duterte offer to buy Pfizer jabs for senators
Don't miss out on the latest news and information.