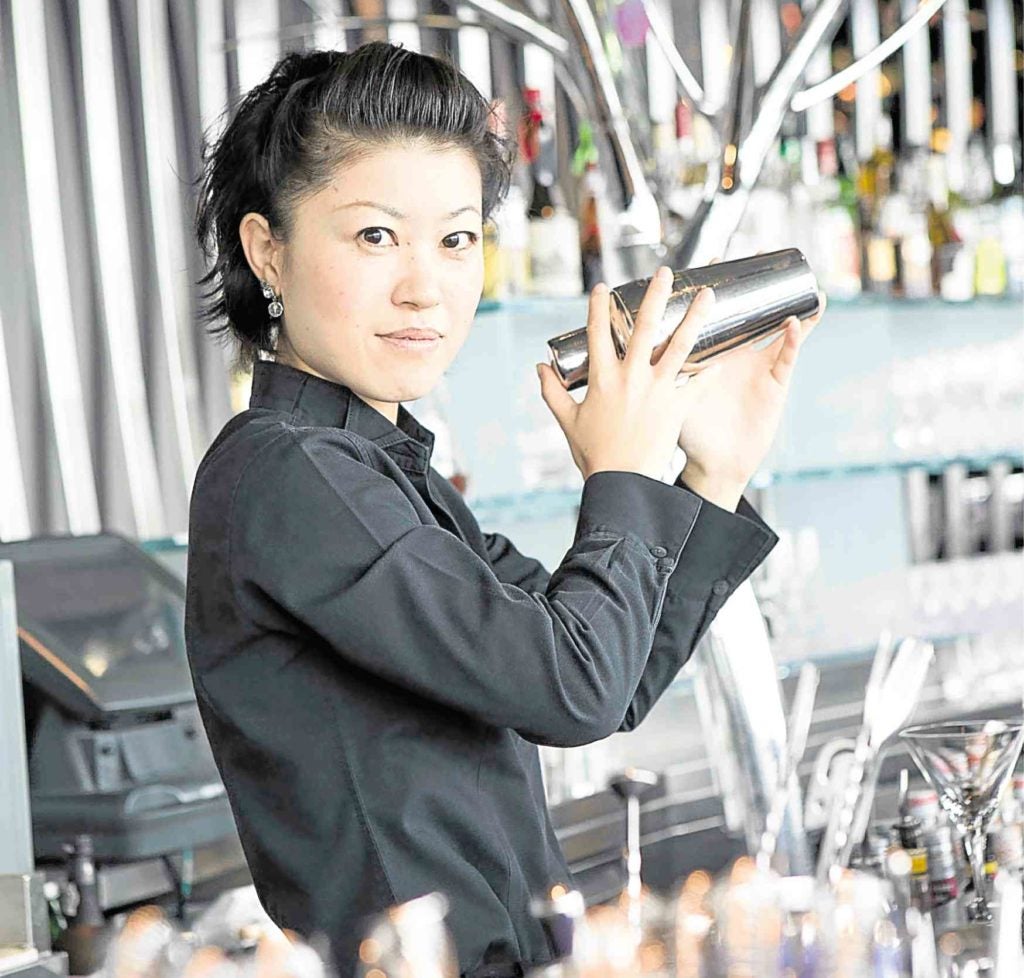 Salon de Ning, the sophisticated club of The Peninsula Manila, has just launched a Mixology Class Series, flying in no less than The Peninsula Tokyo’s head mixologist, Mari Kamata.

Mari Kamata is a cocktail/mixology superstar. She won the 2009 Diageo (the company that owns Johnnie Walker, Tanqueray, Guinness and Ketel One, among others) World Class Cocktail Competition in London; the 2013 Gin Connoisseur Program in France; and the 2016 Seven Star Train Cocktail Recipe Competition in Japan.

She was also a finalist in 2015 for the 007 Belvedere Challenge, mixing her drink Undercover.

I wouldn’t have believed her prowess if I hadn’t sat down with her and witnessed her create a cocktail recipe in less than a minute.

“What would go well with a steak?” I asked. “What kind of steak?” she replied. We settled on a Kobe.

Suddenly, Mari-san was in the zone. Her eyes grew smaller as she focused on tastes. “Kobe has a little bit of natural sweetness from the fat of the beef,” she said quietly.

Then the magic happened: “So I would put a little bit of berry flavor… cassis (a sweet, dark red liqueur made from black currants), cranberry, framboise (raspberry)… ” she said, as if reveling on every drop of the tasting notes.

“It would be best to use American whiskey as a base—bourbon because it has vanilla and a smoky flavor from the barrel. Then I would add a framboise liqueur. I want to add a savory taste… ” She paused until she finally had it. “Green olive bitters.” She smiled before adding, “And a little lime juice … and maybe a little bit fresh pomegranate.”

Garch (Mariano Garchitorena, director of public relations at The Peninsula Manila) and I couldn’t believe it. In less than a minute, Mari-san had created an exquisite cocktail to pair with Kobe beef.

I asked: But do the ingredients have to be expensive? Would you need to use a 30-year-old bourbon?

Apparently not. That’s the beauty of cocktails. It’s all about the balance in the mix, not about the vintage, price or quality of the drinks. If you are to drink a whiskey neat, then the vintage and quality of the tasting notes you are after would be of utmost importance; if you are to mix the whiskey to create a signature cocktail, you can play around with whatever you have.

The key to a good drink is balance. There must be notes of sweet, sour, bitter and acidity.

The most interesting thing I learned from sitting down with Mari-san is that even a cube of ice can make a big difference. The role of ice in the quality of your cocktail is probably why James Bond prefers his martini shaken, not stirred. Sometimes the ice can possibly water down your drink and make the balance of flavors go awry. Mari-san suggests to first “wash” the ice, i.e., pour water over the ice then throw that water. This is to allow the ice to melt a bit and perhaps soften the edges of the ice.

Even the stirring of the ice in the cocktail must be done gently. Mari-san has a technique wherein you use a long stirrer that you hold between your ring and middle finger, with your pointer finger only acting as a stopper and for control. You then make the spoon part of the stirrer glaze around the glass, with only the back of the spoon touching the glass.

This is the technique that expert Mari-san uses, instead of stirring the cocktail as you would coffee. It helps create a more delicate yet compact drink.

For the Peninsula’s Mixology Class Series, Mari-san taught attendees how to make her award-winning Matcha Martini, Hennessy Negroni and Blood & Sand cocktails. Of course, being The Peninsula, the ingredients were nothing but first rate: a 10-year old Ardbeg (that I would drink neat), Belvedere, and Hennessy VSOP Cognac. 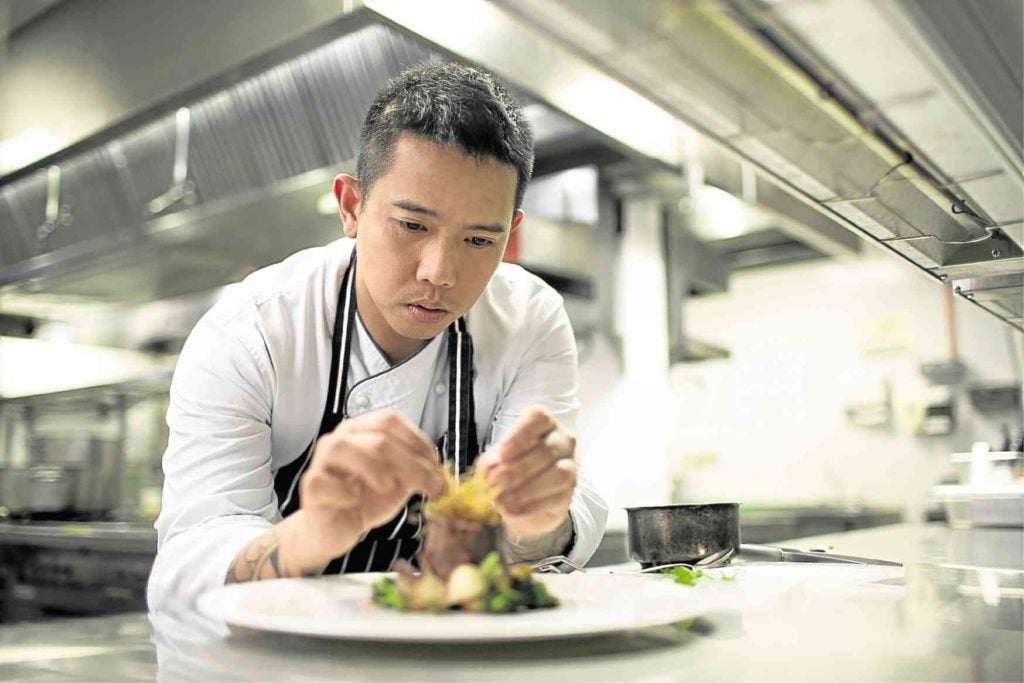 Another great revelation on this last visit to The Peninsula is that their new chef de cuisine, Allan Briones, is making history as the very first Filipino chef de cuisine of The Pen, and at such a young age, too.

If this chef did not come out of the kitchen, you would imagine a mature, experienced, possibly European chef serving the refined dishes. So it’s surprising (Garch calls him a breath of fresh air) when he came out to introduce each dish, to see a young, short, tattoed Pinoy who could very well be mistaken for a Pinoy hip hop/rock artist.

Proudly hailing from Sampaloc, Manila and a graduate of the University of Sto. Tomas and the Center for Culinary Arts, the 37-year-old wears the Philippine flag as an apron (I mean that figuratively). We cheered him on as he proved that neither age nor nationality could stop someone’s light from shining if his work proved brilliant enough.

It doesn’t mean though that he hasn’t paid his dues. On the contrary, the yuppie is a hardworker. His kitchen training started 14 years ago, as an apprentice of no less than executive chef Norbert Gandler, who also trained the likes of Tonyboy Escalante and Ariel Manuel at the Mandarin Oriental Manila in 2004.

In 2011, Briones landed a post at three Michelin-starred Marco Pierre White’s Steakhouse & Grill where his talent was noticed. He was then sent to London to train. He later accepted the post as head chef of Maison Mathis in Dubai and then executive chef and corporate chef at Brown Book, a chain of restaurants in the Gulf state.

Finally, he found his way back to Manila, where he was hired as executive banquet chef when he joined The Peninsula a year and five months ago.

It is truly impressive that in less than two years, he has been given the title of chef de cuisine.

Amazed at Briones’ quick ascent, I asked Garch, “How?!”

“We were really getting a lot of good feedback about him when he was head of Banquet,” Garch explained. “The food in Banquets improved tremendously.”

Briones downplayed his success: “To me, it’s a privilege but I still have the same goal: to bring (customers) good food.”

A sample of Briones’ dishes proved his culinary prowess. Dinner started with foie gras, as usual. But nothing about Briones’ foie gras is usual. The foie gras lies at the bottom of the bowl. Covering it is a layer of port wine gelee. This gives you the classic pull of salty and sweet.

Another layer hides those two layers. This is the fun part, a mix that reminds you of Christmas morning: a sprinkling of homemade granola, a variety of itty-bitty diced berries, and for extra dimension, roasted white chocolate. It was such a pleasure to eat.

For his bouillabaisse, the broth was cooked for 24 hours, creating a very dense flavor. And his barramundi was also cooked beautifully.

I have yet to try the rest of chef Allan Briones’ creations. But it is quite clear why The Peninsula gave him the honor of being the first Filipino chef de cuisine. I may be making my way to Old Manila more often.