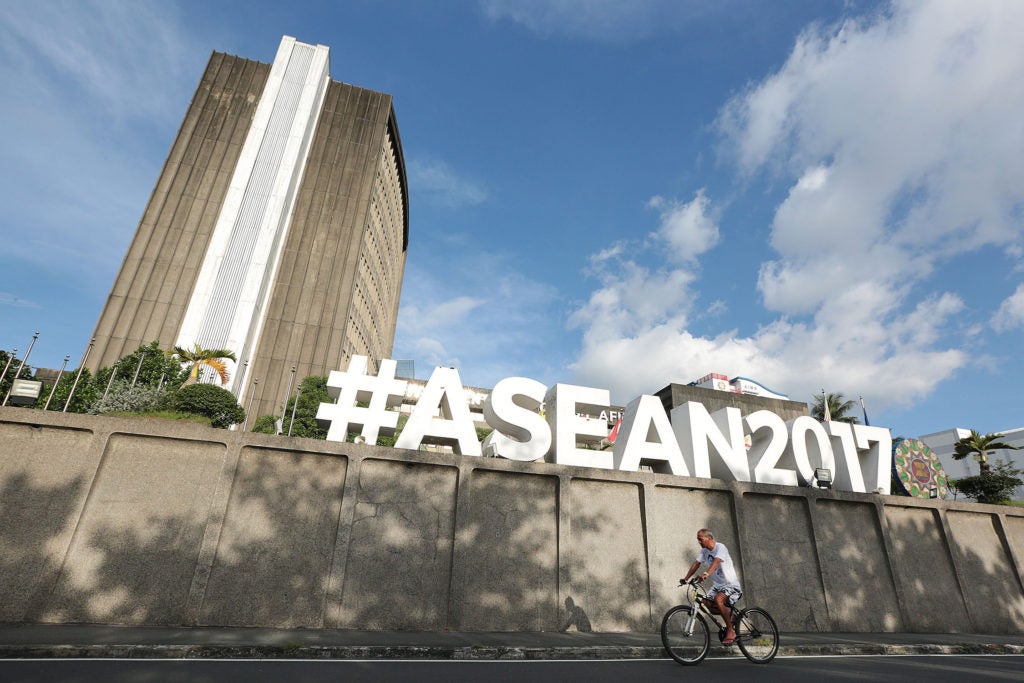 ASEAN-READY A giant Asean sign is put up in front of the Department of Foreign Affairs in Pasay City as the country prepares to host the Association of Southeast Asian Nations (Asean) Summit next week. —GRIG C. MONTEGRANDE

Ho Chi Minh City Infrastructure Investment JSC (CII), one of the largest infrastructure builders in Vietnam, is among the local companies that have had ample experience in dealing with business partners from the Philippines.

Over the past 16 years, CII has built four core businesses: bridge and road infrastructure, water infrastructure, construction and real estate. To fund expansion, it has taken in foreign investors both at the parent company and subsidiary levels.

“We commonly choose a foreign partner based on either their reputation [expertise] or financing capability or both,” Le Trung Hieu, deputy director of capital management at CII, said in an e-mail interview with the Inquirer.

In 2012, Ayala Corp. invested $21 million to acquire 49 percent of CII Water via Manila Water aside from investing $14 million for a 10-percent direct equity in CII. In 2015, Metro Pacific Tollway Corp. purchased a mix of $75 million of shares and convertible bonds in CII Bridge and Road.

“Regarding the partnership between CII and Manila Water, Manila Water is a strong partner in the water sector not only because of their financing capability but also their experience and expertise derived from their successful water business in the Philippines. This is critical to CII because we are quite new to the whole water sector,” Hieu said.

Asked why many Philippine companies have been attracted to Vietnam, Hieu said there could be many factors “from the top to the bottom.”

“At the top level, Vietnam’s macro [economy] is quite good. Political situation is quite stable. We have a young, dynamic and constantly growing population of currently more than 90 million people. At the bottom level, there are many investment opportunities across many sectors. The government is also trying to improve the legal framework to welcome foreign investment,” Hieu said.

“Furthermore, we feel that the [Filipinos] and Vietnamese are quite similar in their ‘consuming’ behavior. That could also be a reason why many Filipino firms are interested in establishing businesses in Vietnam,” Hieu said.

“There are and will be many differences between partners. That is why it is important to have a mutual understanding of these differences and respect the value that each partner brings to the partnership. For example, foreign [companies] may have a strong financing capability and reputable brand names. However, they lack relationships with the local government and understanding about the local market, which are what their local partners are good at,” he said.

The Aboitiz group, one of the big conglomerates that recently started regionalizing its business, is among those that have chosen Vietnam as their first host country.

“It has a lot of demographic similarities to the Philippines, nearly a hundred million young population. You’d think it’s a communist country but it’s very business friendly,” said Erramon Aboitiz, president and chief executive officer of Aboitiz Equity Ventures (AEV). “It’s the same story in Indonesia, except that it’s so much bigger (with 260 million people).”

The first business that the Aboitiz group brought overseas was Pilmico Foods Corp., which is into the commodities and food business.

VHF has since then been officially renamed Pilmico VHF Joint Stock Co. It is the fourth largest pangasius aqua feeds producer in Vietnam, with a capacity of 165,000 metric tons (MT) per year. Pilmico VHF’s capacity was ramped up to 270,000 MT in April 2016.

The investment in Pilmico VHF is expected to pave the way for investments in other Asean countries like Thailand, Laos and Cambodia.

Indonesia is next on the Aboitiz group’s expansion program, particularly for its flagship business of power generation.

Aboitiz agrees that it’s better to enter any new overseas market with local partners. “Just like people who come to the Philippines, they look for partners,” Aboitiz said.

The center—which offers courses on child caregiving, elderly caregiving and special care assistance—was in response to the shortage of healthcare professionals. It is expected to create more job opportunities for Myanmar’s young people.

Phinma Education’s foray into Myanmar was one of the case studies featured by PwC in its latest research on Asean partnerships.

In the research, Phinma Corp. chief executive officer Ramon del Rosario Jr. shared his learnings from this foray: “First, identify your strengths and see if there’s a market for it. Next, study the regulatory environment. One should look into the investment policies of a particular market, and confirm that the market is receptive to investments by Filipinos. Third, choose the right person to manage the business for you.”

Del Rosario said the ball carrier should not only be a technical expert but must also have the personality and self-confidence.

“The ball carrier should be one of your most competent people who can deal with different cultures. Most important, find the right partner. Partners are very critical not so much because of their ability to contribute capital, but because of their ability to share their knowledge about local conditions, market, regulations and experience in maneuvering through the bureaucracy,” he said.

This feature was produced as part of the Reporting ASEAN programme (www.aseannews.net), hosted by Probe Media Foundation Inc. with the support of the ASEAN Foundation.