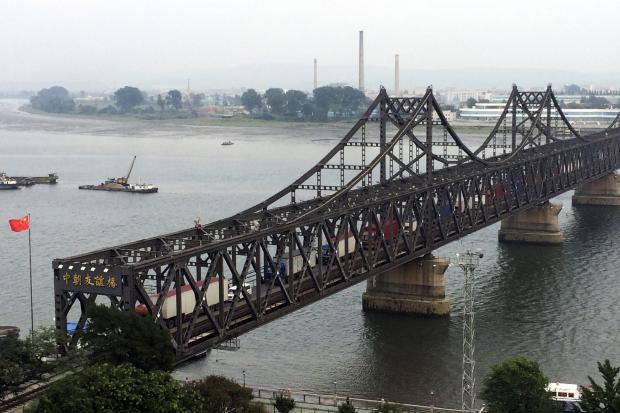 In this photo, taken Sept. 4, 2017, trucks cross the friendship bridge connecting China and North Korea in the Chinese border town of Dandong, opposite side of the North Korean town of Sinuiju. For Chinese traders, new United Nations sanctions on North Korea are a disaster. Business in the Chinese border city of Dandong has all but dried up as Chinese traders are unable to collect payment from impoverished North Korean state companies for goods such as toothpaste, instant noodles and other household items. Large-scale trade involving North Korean iron ore and coal has been banned entirely, dealing a big blow to Dandong’s port, whose operator defaulted on a $150 million corporate bond. (Photo by HELENE FRANCHINEAU / AP)

The trader in the Chinese border city of Dandong has seen business all but dry up, and he spends his days scrambling to obtain payment from the suddenly broke North Korean state companies to whom he sold on credit.

“They have no money to pay us in cash, and the worst is that because of sanctions they can’t settle the bill with goods such as coal, as they did in the past,” said Yu, reached by telephone at the offices of his Dandong Gaoli Trading Company.

Yu said he’s owed about $1 million in all for deliveries of toothpaste, instant noodles and other household items. He’s trying to avoid laying off staff by continuing to export foodstuffs such as pine nuts and red beans. “If they become unemployed, it would be bad for both the state and society.”

Yu’s plight appears increasingly commonplace across Dandong, where the bulk of the cross-border trade is handled.

Interviews with four trading companies and recent media reports indicate Chinese companies are hurting in a city where North Korean trucks used to rumble across the Yalu River bridge several times a week delivering metal scrap and returning with everything from televisions to toilet bowls.

The owner of another firm, Dandong Baoquan Commerce and Trade Co., which used to import iron ore and coal and export basic consumer goods, said he was still owed around $200,000 by his North Korea clients.

“I had to lay off about 10 staffers, but I had no other choice because it was the government policy,” Han Lixin said, referring to the sanctions. “I’m still in business hoping to trade with other countries, but it takes a lot of time and efforts to develop customers.”

Large-scale trade involving North Korean resources such as iron ore and coal has been banned entirely under the sanctions, dealing a big blow to Dandong’s port, whose operator defaulted on a $150 million corporate bond this week in part because of cratering revenues.

“The sanctions have a broad effect, and both the economies of North Korea and China are suffering a lot,” said Jin Qiangyi, professor at the Institute of Northeast Asia Studies at Yanbian University in Northeast China. “Chinese companies doing business with North Korea may see quite a lot of losses, and the companies that have already invested in North Korea will suffer more.”

Dealing with North Korean companies was never easy. Wang Chengpeng, former manager of Dandong Hongwei Trading Company, quit doing business with the North entirely because of hassles, restrictions and low-profit margins, even before the latest sanctions began to bite.

Despite that, China has long been the North’s biggest economic partner. Beijing accounted for more than 90 percent of its neighbor’s foreign trade of about $6.5 billion in 2016, according to the South Korean-owned Korea Trade Investment Promotion Agency.

China continues to be a key source of food and fuel aid to help keep North Korea’s weak economy from collapsing, and Chinese officials say they won’t agree to measures that could cut off basic life necessities and possibly cause Kim Jong Un’s dictatorship to topple.

China’s patience with Kim has grown increasingly thin, however, and Beijing has lent its support to increasingly tough resolutions unanimously approved by the Security Council this year that target North Korea’s economy in response to its ballistic missile launches and latest nuclear test.

China has said it sees sanctions purely as a means of inducing North Korea to return to nuclear disarmament talks and has rejected unilateral measures not approved by the Security Council, of which it is one of the five veto-wielding permanent members.

Still, despite some allegations of cheating, China appears to be seeking to enforce the sanctions that also ban exports of lead, textiles and seafood, prohibit joint ventures, and bar any country from authorizing new permits for North Korean workers – all sources of hard currency for Pyongyang.

The sanctions have also blacklisted a number of firms in the extraction and financial industries, imposed travel bans and frozen the assets of some government officials, banned the import of natural gas liquids and condensates, and capped the country’s crude oil imports.

It’s hard to gauge the exact impact of sanctions on the North Korean economy because the crucial food and energy sectors are less likely to be hurt by external conditions, said Lee Seok-ki, a senior researcher at the South Korean government-run Korea Institute for Industrial Economics and Trade.

However, while the North’s economy has been expanding – by 3.9 percent in 2016, according to an estimate by the Bank of Korea in South Korea – that rate almost certainly can’t be sustained if sanctions continue, Lee said.

China for its part is watching North Korea to see how its ally will respond to the new measures, eager for signs of a shift in tactics by Kim and an improvement in relations between Beijing and Pyongyang that have “sunk into a standstill,” as Jin puts it.

In that context, Kim’s message of congratulation to President Xi Jinping upon his reappointment as leader of China’s ruling Communist Party last week is being cautiously viewed as a possible indication of change.

“There has been a calm from the North Korean side for about a month, and we are not sure whether it is because of the excessive pressure they are under or their miscalculation on China’s determination,” Jin said. “It’s still too early to say.”