US cuts off Chinese bank over North Korea ties 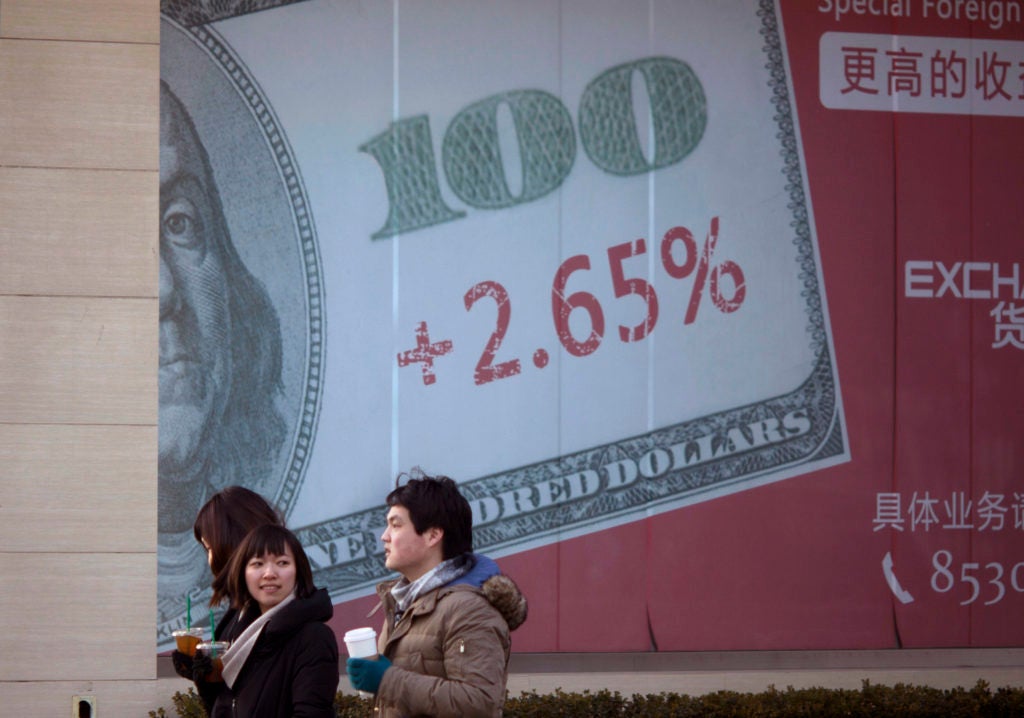 In this Jan. 7, 2016, file photo, Chinese pedestrians walk past a giant U.S. dollar note on a display board of a bank in Beijing. President Trump has often named Asia, and China and Japan in particular, as a source of American economic woes. A persisting U.S. trade deficit with most Asian countries and the president’s frequent threats to impose sanctions or raise tariffs on exports from the region make trade a fraught issue. (AP Photo/Ng Han Guan, File)

The United States excluded on Thursday China’s Bank of Dandong from its financial system, alleging that it has helped North Korea evade financial sanctions to launder funds.

Washington had alerted other businesses in June that it planned to take the action, but it finally went into effect just as US President Donald Trump was to set off on an Asian tour on Friday.

Trump has demanded that Beijing do more to push its neighbor North Korea to stop efforts to build a nuclear-armed missile capable of reaching American cities.

Trump is expected to convey this message to President Xi Jinping in Beijing next week, but China is reluctant to push sanctions so far as to destabilize Kim Jong-Un’s North Korean regime.

Officials in Washington warn that, while they would prefer Kim to come to the table, Trump has not ruled out a pre-emptive strike to prevent him from crossing the missile threshold.

But, alongside this saber rattling, Washington is also slowly stepping up secondary sanctions on foreign institutions like the Bank of Dandong, which it accuses of funneling illicit funds.

This risks angering China, but hawkish commentators argue that it remains the only way short of war to force Pyongyang – and perhaps more importantly Beijing – to reconsider their strategy.

“Banks and businesses worldwide should take note that they must be vigilant against attempts by North Korea to conduct illicit financing and trade,” Treasury Secretary Steven Mnuchin said.

Along with the ban on Bank of Dandong, the US Treasury also issued new guidance to international banks’ risk and compliance officers to help them spot North Korean attempts to infiltrate world finance.

Banks from China and around the world find it hard to operate if they are barred from the US financial system, which is a clearing house for most dollar-denominated transactions.

Aside from the financial sanctions, Washington may also decide to re-designate North Korea as a “state sponsor of terrorism” – a formal blacklist that would add to sanctions pressure.

However, the Trump administration does not seem to be in a hurry, despite his anger over the death of US student Otto Warmbier after he was imprisoned and apparently brutalized in North Korea.

On August 2, Trump reluctantly enacted a law, forced on him by the US Congress, pressing for new economic and political sanctions against Iran, Russia, and North Korea.

One clause of that law required the US State Department to say within 90 days whether North Korea should be named a terror sponsor – a deadline lawmakers said expired on Tuesday.

The State Department said it had calculated the deadline differently and was working toward a Thursday announcement, but as office hours came to an end there was no news.

Congressman Ted Poe, chairman of the House subcommittee on Terrorism, Nonproliferation and Trade, was unimpressed and followed up with the State Department to ask about the delay.

“To me, the very law is clear. The designation should have occurred by October 31,” he said.

Earlier, at the White House, National Security Adviser HR McMaster had said the designation was still an option that is “under consideration” and that news would come “soon.”

He then cited the murder of Kim’s half-brother Kim Jong-Nam, who was attacked in February with VX nerve agent at a Malaysian airport, as one reason the North Korean regime might be deemed a terrorist.