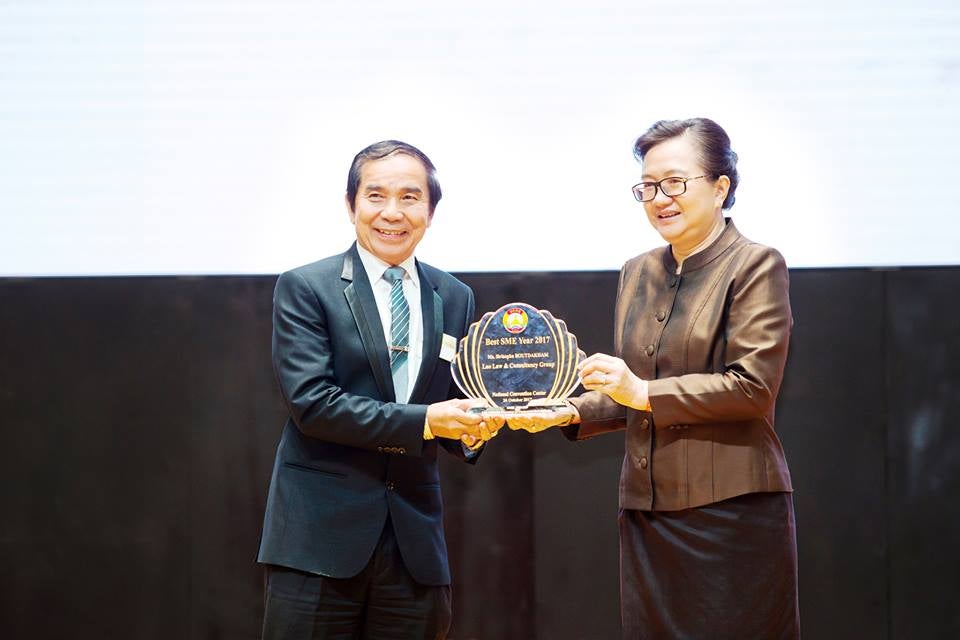 This commitment was confirmed recently by Phouvong Jewelry’s Deputy Managing Director, Mr. Chanthavong Phamisith, after he returned from the 10th Asean Business Awards 2017 (ABA) held in the Philippines in September.

Phouvong Jewelry represented Laos in being awarded with the Most Promising Asean Enterprise Special Recognition for exhibiting great potential in becoming a business leader in the country.

Mr. Chanthavong was among 47 awardees and 68 finalists to receive a specially-crafted trophy from President Rodrigo Duterte.

“We are very happy to receive this honourable award from the ABA, presented by President Duterte,” Mr. Chanthavong told the Vientiane Times recently.

“We promise that we will continue to develop our organization and staff after receiving this award.”

Mr. Chanthavong said Phouvong Jewelry currently sold a plethora of designs made from gold, silver, diamonds and other precious gems.

“We place priority on the quality of our products—believing that our customers are valuable and not to be exploited,” Mr Chanthavong said.

Phouvong Jewelry was established 34 years ago in Laos. It started as a small chain of jewellery shops and grew into a widely popular brand. It was a previous winner of the Asean jewellery design competition in 2015 and a winner at the Lao Business Awards in 2016.

Phouvong Jewelry was welcomed with the commemorative artwork signing of a mural reminiscent of Fernando Amorsolo’s style featuring Asean 50 and the Asean Business Advisory Council.

In addition, Phouvong Jewelry received the Best Small Medium Enterprise Awards 2017, held on October 26 in Vientiane in recognition of its contribution to national socio-economic growth.

During the event, Minister of Industry and Commerce Ms. Khemmani Pholsena presented this award to Phouvong Jewelry’s Managing Director and President of the Lao Gem and Jewellery Traders’ Association, Mr Phouvong Phamisith.

This year marks the 34th anniversary of Phouvong Jewelry. The shop plans to hold a lucky draw in December to repay customers for their loyalty with a big prize of 34 baht weight of gold.

Phouvong Jewelry annually runs a corporate social responsibility programme by funding the construction of schools and hospital as well as providing assistance to poor people in rural areas and households who have been affected by natural disasters.

Regarding ABA, the event continues to bring to the spotlight promising and outstanding Asean companies that have the potential to become global economic players.

Attended yearly by the top business players in the region and beyond, the awards continue to propagate progress and business leadership.

More than 900 guests attended the ABA Gala Night with 400 delegates mainly from the Asean region, including government officials, members of the diplomatic corps, and entrepreneurs.

Since 2007, the awards have hailed more than 100 entrepreneurs and their enterprises that have grown in value in their home countries and across the region.