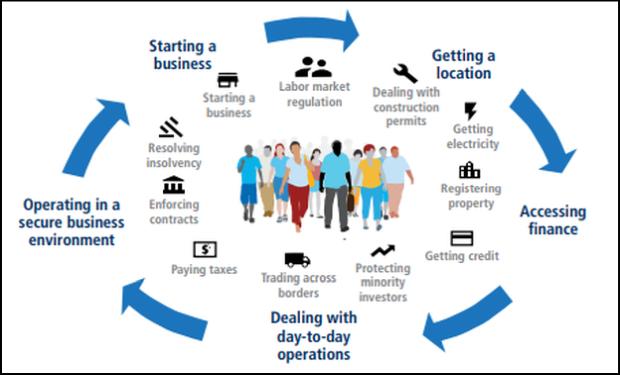 The Philippines’ ranking in the ease of doing business slipped to 113th this year from 99th last year across the 190 countries covered by an annual World Bank Group report.

The latest “Doing Business 2018: Reforming to Create Jobs” of the World Bank released Tuesday night (PH time) showed that the Philippines’ distance to frontier (DTF) slightly improved to 58.74 from 58.32 in the Doing Business 2017 report.

DTF measures how far the economies covered by the report were to the best performing economy on each of the indicator,.

The 2018 report covered reforms in the past year.

“An economy’s DTF is reflected on a scale from zero to 100, where zero represents the lowest performance and 100 represents the frontier,” the World Bank explained.

However, the Philippines’ 2018 DTF was below the average of 62.7 across East Asia and Pacific economies.

In the ease of doing business indicators, the Philippines’ ranked 173rd in starting a business, 101st in dealing with construction permits, 31st in getting electricity, 114th in registering property, 142nd in getting credit, 146th in protecting minority investors, 105th in paying taxes, 99th in trading across borders, 149th in enforcing contracts, and 59th in resolving insolvency.

To illustrate how much more difficult it was to open a business in the Philippines, the World Bank said:

“Consider the case of the potential software entrepreneur. If she were a national of Canada, it would take just two procedures, one and a half days and less than 1 percent of income per capita to start her business in Toronto.

“First, she would need to file for federal incorporation and provincial registration online via Industry Canada’s Electronic Filing Centre; this costs 200 Canadian dollars ($159) and is completed within a day.

“Second, she would need to register online for value added tax; this costs nothing and is completed within half a day. She can perform these steps online from the comfort of her home.

“As her business expands and becomes profitable, she would be expected to pay 20.9 percent of her commercial profits in taxes and contributions annually.

“However, if the same entrepreneur were a national of the Philippines, living in Quezon City, the business incorporation process would require 16 procedures, take 28 days and cost around 16 percent of income per capita.

“She would need to make 20 different tax and contribution payments and visit multiple agencies in person. Furthermore, her business would be expected to pay 42.9 percent of its commercial profits in taxes and contributions annually.”

The World Bank nonetheless noted that the Philippines this year introduced reforms to make it easier to secure electricity service as well as pay taxes.

“The most common feature of reforms in the area of paying taxes over the past year was the implementation or enhancement of electronic ling and payment systems.

The Philippines, alongside Angola, Armenia, Indonesia, Italy and Niger, also improved the process efficiency when getting electricity, according to the World Bank.