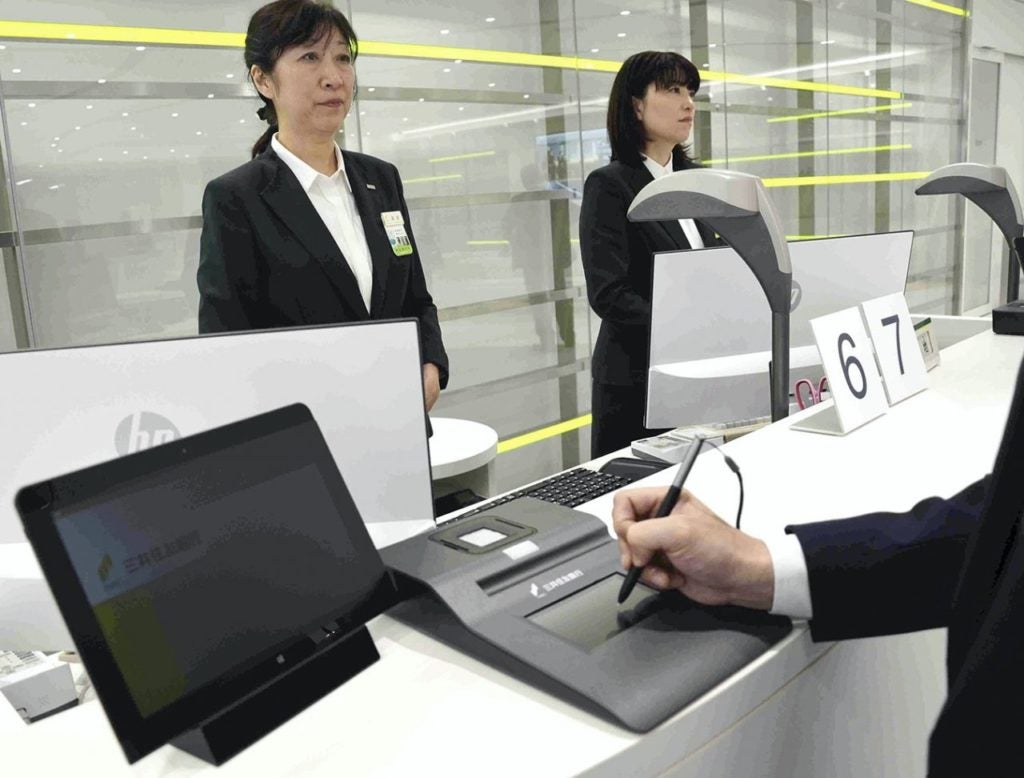 The irresistible shift toward digitization is sweeping through Japan’s three megabanks. Amid a drive toward greater efficiency and higher profits, artificial intelligence and robot technology are increasingly replacing roles typically handled by thousands of bank employees

Mizuho Financial Group Inc. is planning to cut 19,000 jobs over the next 10 years or so, as the global competitive environment undergoes drastic changes due to the spread of fintech — technology used to enable and support financial services. Such changes are forcing the megabanks to rapidly embrace measures to digitise their operations.

Following revelations about the Mizuho group’s planned job cuts on Oct. 28, a Mizuho Bank female employee in her 30s said: “At our bank, how to boost sluggish earnings has been an issue that needs to be addressed. But I also feel uneasy about cutting our workforce.”

All three megabanks are pressing ahead with digitisation, exploiting AI, robots and other technologies to streamline their operations. They have begun implementing measures that will ultimately enable them to reduce their number of employees.

The Mizuho group has developed a robot that can assist customers who visit branches with queries about asset management and other services. If the robot is put into practical use, it could replace employees who currently do this work. By digitising these operations and limiting the number of new hires, the group plans to eventually cut its workforce to two-thirds of the current level.

Sumitomo Mitsui Financial Group Inc. has introduced paperless operations at some of its bank branches. Customers can use touch-sceen styluses and electronic signatures to complete procedures for transferring and depositing money, rather than filling out paper documents. The group plans to make these services available at all branches within three years.

Robots will even be used to compile some documents at the head office. The group will restructure its organisation and aims to ultimately cut expenses by ¥100 billion annually in the future.

Mitsubishi UFJ Financial Group Inc. also is adopting AI technology more widely, and plans to operate branches in which customers can use services without the assistance of bank employees.

The three megabanks are expected to slash about 33,000 jobs in total. The increasing digitisation of services that will enable these reductions comes amid a severe earnings environment. The impact of the Bank of Japan’s negative interest rate policy has dragged lending rates to extremely low levels, which has squeezed profit margins and made it difficult to boost earnings through existing operations such as financing.

Furthermore, a string of new fintech companies have entered the industry, intensifying competition in the finance world. Fintech firms, some of which allow customers to easily make settlements, send money and perform other common financial services through smartphones and other devices, have become widespread.

Japan faces an era in which its population is shrinking. A Bank of Japan Financial System Report released this month states that, “the number of financial institutions’ employees and the number of branches may be in excess [oversupply] relative to demand.”

Financial institutions in Europe and the United States have made a head start on the path to digitisation. In February, the U.S. academic journal MIT Technology Review reported that the cash equities trading desk at Goldman Sachs’ headquarters in the United States employed 600 traders in 2000. Now, only two traders remain there. Automated trading programs supported by 200 computer engineers do the rest of the work, according to the magazine.

In a report on the financial industry released last spring, U.S. banking giant Citigroup said many staff at branches can be replaced through automation. The report said, “We believe there could be another 30-percent reduction in staff between 2015 and 2025.”

Nana Otsuki, a chief analyst at security firm Monex Inc. and an expert on the banking industry, said: “For many banks, streamlining operations by reducing employees and branches is an unavoidable trend. It’s possible such moves will expand in the future.”