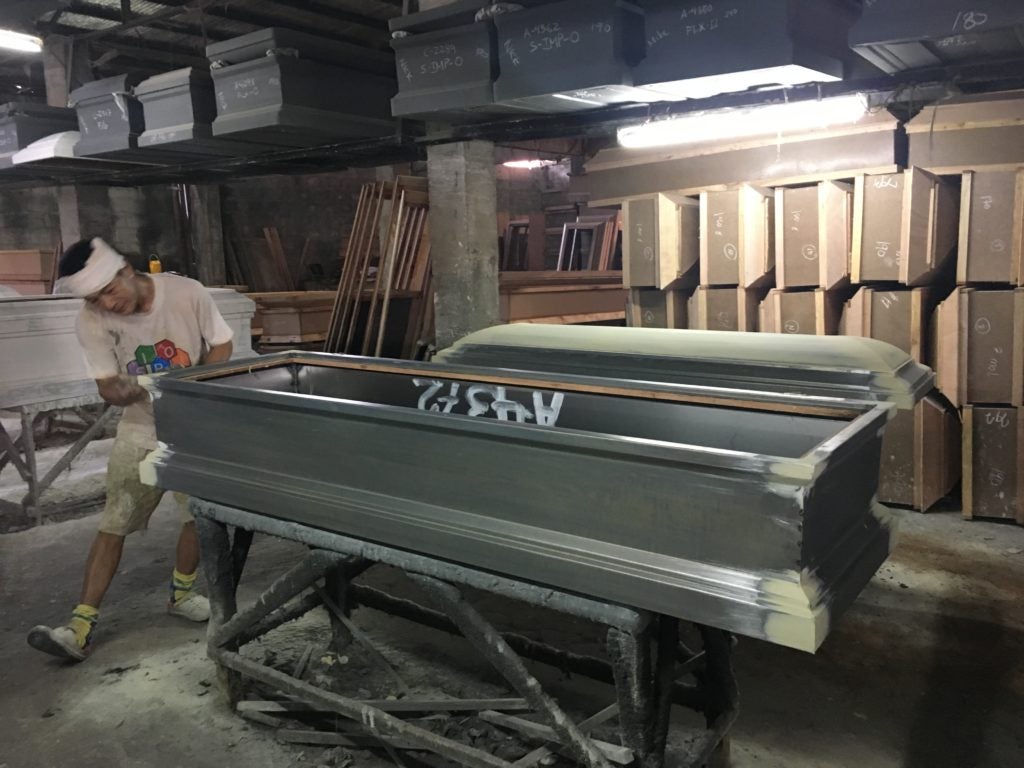 PROUDLY MADE IN PAMPANGA A craftsman applies the finishing touches on a coffin ordered from his factory in Santo Tomas, Pampanga. —TONETTE OREJAS

SANTO TOMAS, Pampanga — Cremation has given this coffin capital of the Philippines very serious competition.

St. Louis Memorial Chapels, an industry leader here, has seen its monthly average sales dip since 2016, selling just 40 to 45 of its usual 50 coffins per chapel.

The company makes and sells coffins, and provides a whole range of funeral services, including viewings and, ironically, a quick reference to cremation facilities if that is what customers desire.

“Some families who avail themselves of our funeral services prefer cremation so they only rent coffins for the viewing,” said Nadinee Arceo, owner of St. Louis Memorial Chapel.

Arceo said ashes were kept in urns, which may be buried in cemeteries or preserved in crematoriums.

How cremation is affecting the whole Santo Tomas coffin business has yet to be assessed. The local government does not keep track of sales while factory owners and their employees are not organized.

This town, Pampanga province’s smallest in land area (1,467 hectares) and population (40,475 as of 2015), has fewer than 100 registered enterprises and about 200 backyard makers, each producing a minimum of 80 coffins, according to Arceo’s son, former Vice Mayor Marc Louie Arceo.

With an output of 24,000 coffins a month, Santo Tomas may well be the supplier of 70 percent of coffins in the country. It was the Department of Trade and Industry that gave the town the title of coffin capital of the Philippines two decades ago.

But cremation is an attractive option because, at a price of P20,000 to 25,000, this service is cheaper compared with the cost of burial rites.

A plot in a cemetery can cost anywhere from P80,000 to P200,000. These expenses do not include food and donations for Masses during a three-day wake.

“Cremation is more of a choice among the rich and middle class,” Arceo said.

In 2016, the Vatican released instructions concerning burial and cremation that, among other things, ban the scattering of ashes and prohibit Catholics from keeping these at home.

Craftsmen in Santo Tomas cater to every sector and offer coffins that are affordable.

In the 1990s, local manufacturers competed with US-made Batesville coffins. Craftsmen here kept up with the trend by using metal sheets.

China-made coffins soon entered the market bearing a striking similarity to Batesville coffins except that the products were machine-molded.

During the time of Aquilino Tayag’s House of Woodcraft, coffins were made from lumber and palo china, said Arceo, whose father-in-law, Florencio, was Tayag’s master carpenter.

Amid these developments, Alfredo Batac, 71, stands out by doing away with paint. Instead, he has been covering the exterior and interior of his coffins with velvet. He made coffins after retiring as a furniture maker for American soldiers stationed at the former Clark Air Base.

Mayor John Sambo said the industry could stay on top of the competition if local makers were united and the local governments could facilitate support in raising capital, modernizing production and improving market reach.

Coffin makers have cultivated the business by venturing out to where there is no stiff competition.

Others like Concha Lapid have purposely kept their business small.

Known to be living the tradition of honoring the dead by making good coffins, artisans in Santo Tomas have been tapped by local governments to produce basic coffins for those who died in Supertyphoon “Yolanda” (international name: Haiyan) in 2013, Typhoon “Pablo” (Bopha) in 2012 and Tropical Storm “Sendong” (Washi) in 2011.