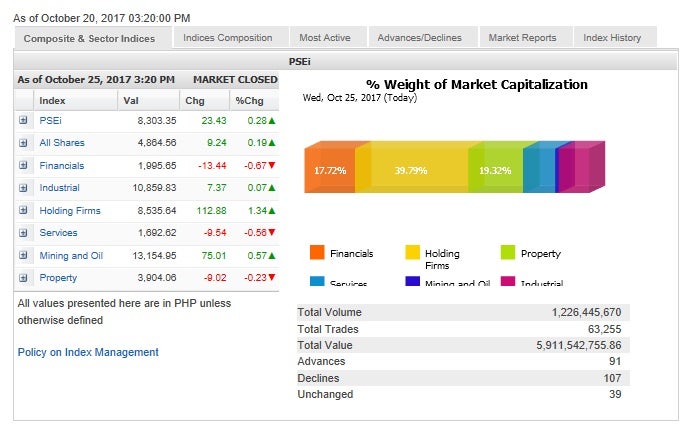 The local stock barometer reversed early losses to firm up above 8,300 yesterday due to the late surge in buying of selected large-cap stocks.

“Shares were bought up at the last minute on light trading value turnover in the PSEi. This was aligned with US stocks, which rose on Tuesday, with the Dow hitting the latest in a series of records as earnings continued to come in largely ahead of expectations,” said Luis Gerardo Limlingan, managing director at Regina Capital Development.

At the local market, the gains were led by the holding firm counter, which gained 1.34 percent, while the industrial and mining/oil counters also posted small gains.

The financial, services and property counters all declined.

Value turnover was thin at P5.91 billion. Despite the slight PSEi gain, market breadth was negative. There were 107 decliners, 91 advancers while 39 stocks were unchanged.

The PSEi was led higher by Ayala Corp., Security Bank and SM Investments which all gained by more than 2 percent. SM Prime, Jollibee and AGI also firmed up.

Outside the PSEi, notable gainers were Global Ferronickel, which reported an 11.2-percent growth in nine-month net profit.

On the other hand, the PSEi’s rise was curbed by the decline of Metrobank, which lost 2.79 percent, and its parent conglomerate, GT Capital, which shed 2.42 percent.