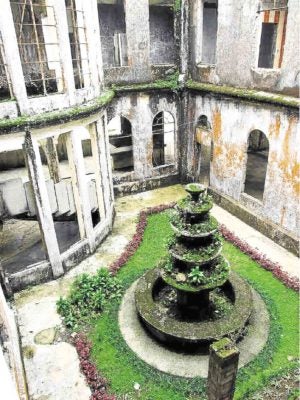 The Philippines is home to a number of landmark structures and sites. Notable for their architectural value and historical relevance, these structures have become a symbol of the country’s rich cultural heritage.

But more than just being considered as a valuable edifice, some of these structures have become quite famous because of the mysterious and oftentimes eerie and spine-chilling stories attached to them.

And as Halloween draws near, Inquirer Property has listed down a number of structures that were claimed by many to be haunted and possessed.

One of Baguio City’s famous landmarks, Diplomat Hotel, is known as an abandoned haunted structure.

But before the building became a hotel, it was originally a retreat house of the Dominican friars called the Dominican Hill and Retreat House.

The original retreat house was built in 1913 when the American colonial government began populating the mountain city by auctioning parcels of land. The Dominicans built the earthquake-resistant retreat house so they could escape the tropical heat of Manila during summer.

It was inaugurated in 1915 as a school named Colegio del Santissimo Rosario to evade colonial government taxes imposed on “grand houses.”

The school was shut down three years later and became a retreat house that was often visited by Spanish families of Iloilo, Cebu and Manila.

When Japan invaded the Philippines in 1941, Baguio City became the headquarters of the Japanese Imperial Army who turned the Dominican building into a prisoners-of-war camp. The Dominican house did not survive the war, as portions of the building turned into rubble.

In 1974, the Dominicans sold the property and the retreat house was converted into the 33-room Diplomat Hotel. The hotel closed in the ’80s when one of its owners, faith healer Antonio Agpaoa, passed away.

According to reports, there were ghost stories of marching hooded friars, Japanese soldiers, and wailing babies during the last years of the hotel.

When the hotel closed, it was looted and cannibalized. The city government had been rebuilding the structure inch by inch, but at a pace slowed down due to meager finances.

It has since become a popular spot for ghost hunting or as the location shoot for horror films due to its chilling baroque façade.

On Sept. 1, 2014, the Dominican house was declared an important cultural property by the National Historical Commission of the Philippines.

The city government has then classified the property as a heritage hill and natural park, and had urged the public to suggest how it should be preserved.

Also located in Baguio City is the Laperal mansion, known as the “White House,” which has its share of tales of horror and cruelty.

The Laperal mansion is a Victorian house built in the ’30s on a 4-hectare property near Teachers’ Camp. It was owned by Roberto Laperal.

Caretakers and helpers of the house have passed on ghost stories about the mansion.

Lito Calvo, the house’s gardener for over a decade, previously said in a report that longtime caretaker “Ate Lina” had told him the house was taken by Japanese soldiers from the Laperal family during World War II.

Another longtime caretaker, Alma Ramos, said that women were raped in the bedrooms, while Filipino men who were accused of spying for the Americans were tortured and killed. A house help supposedly committed suicide in the mansion.

Visitors with a third eye claim that restless spirits lived in the house. Calvo and Ramos also recounted some spooky instances, such as strange footsteps in the basement, doors and windows being shuttered, images moving by the windows, and lights turning on and off.

But the others, who have been to the Laperal mansion, reportedly said it was just an art deco masterpiece, and not really that scary.

Aptly named because of its red exterior, “Bahay na Pula” was a mansion owned by the Ilusorio family, who continues to fight to this day over the estate left by patriarch and Marcos crony Potenciano after he died in 2001.

The pre-war structure located in the town of San Ildefonso in Bulacan became a symbol of savagery during World War II since a number of “comfort women” from Bulacan and Pampanga provinces were abused inside it by members of the Japanese imperial forces.

The house was less than two kilometers south of the village of Mapaniqui in Pampanga, where war atrocities began in 1944.

On Nov. 23, 1944, the Geki Group of the 14th District Army under Japanese Imperial Army Gen. Tomoyuki Yamashita attacked Mapaniqui, a suspected bailiwick of Hukbo ng Bayan Laban sa Hapon, the armed wing of the old Communist Party of the Philippines.

According to accounts of one of the comfort women, Japanese soldiers pillaged and burned the entire village.

They then rounded up men and boys, severed their sexual organs, and forced these into the mouths of the victims. When the massacre was over, the corpses were thrown into a large pit and set ablaze.

Around 200 girls and women were forced to carry the Japanese loot to Bahay na Pula, where the sexual abuse commenced.

Girls who had not yet begun menstruating saw no respite from sexual abuse, according to the Asian Center for Women’s Human Rights, which documented the cases and brought them to the attention of an international war tribunal.

Last year, the red mansion was demolished and will reportedly be reconstructed in the seaside “heritage resort” of Las Casas Filipinas de Acuzar in Bagac, Bataan province.

The mansion had been be a subject of a number of paranormal shows and programs of various media outlets and film outfits.

Former First Lady Imelda Marcos, acting as chair of the Cultural Center of the Philippines, built the Manila Film Center so the government would have a venue for the first Manila International Film Festival (MIFF) slated on Jan. 18, 1982.

But Marcos compressed the construction work of the Manila Film Center to just 10 months, causing the collapse of the sixth floor on an unknown group of workers in November 1981.

Work reportedly did not stop for the recovery of the bodies and they were buried along with the cement and debris. Imelda has long denied this and said that proper burial were given to the victims.

The number of those killed remains unclear due to heavy censorship at the time. Baltazar Endriga, former CCP chair, once estimated it in previous reports at 30, while a group of psychics claimed it could be more than 100.

During Corazon Aquino’s presidency, the Department of Foreign Affairs moved its passport processing operations to the Film Center.

Employees working alone at night were said to have heard certain sounds, such as typewriters being used, while a psychic reportedly said the Film Center was acting as a magnet for other restless beings such as those who drowned in Manila Bay or who were run over on Macapagal Avenue.

The Film Center has become the venue of “The Amazing Show,” a series of lip-synched musical numbers performed by gay impersonators.

Performers here dance and lip-synch stylized adaptations of “Phantom of the Opera”, “Moulin Rouge” and Bollywood.

But according to the show’s organizers, decay and deterioration are notable in areas where theater viewers are not likely to stray.