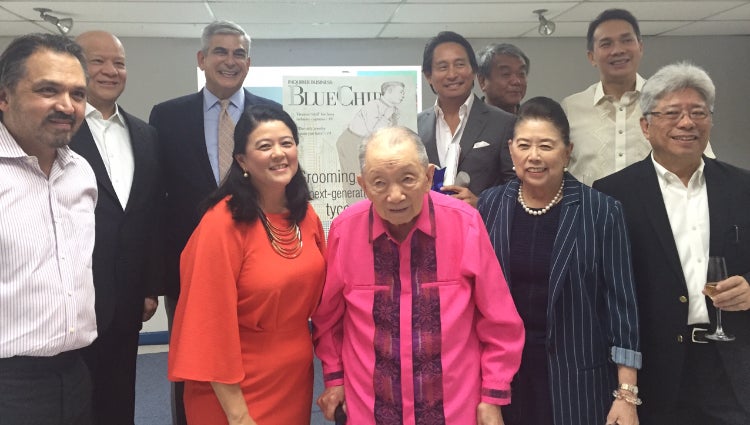 The business community and civil society are mourning the death of the “Grand Old Man of Philippine Business,” Washington SyCip, founder of SGV & Co.

SyCip, 96, died on Saturday night aboard Philippine Airlines Flight No. 126 (MNL/YVR/JFK) as the plane was heading to Vancouver Airport.

He was traveling with his son George Sycip and an assistant, Roberto Cabilles.

His remains as of Sunday were at Richmond General Hospital in British Columbia, Canada.

“We will miss you, WS,” said Purisima, who was mentored by SyCip during the former’s years at the auditing and consulting firm.

Malacañang on Sunday extended its condolences to the family of SyCip.

Presidential spokesperson Ernesto Abella said SyCip was a “respected voice in corporate governance” and a “staunch believer in Filipino talent.”

His counsel was widely sought by Philippine leaders and by companies, both local and foreign. He was also a widely respected voice advocating good corporate governance and minority rights.

“Wash had the rare ability to keep things simple and often, quick to share his wisdom, embellished with wit and humor. He will be missed,” Pardo added.

BDO chair Teresita Sy-Coson said SyCip had been a highly valued adviser to the board of directors of BDO Unibank.

Rene Almendras, head of AC Infrastructure, said it was a sad day for a grateful nation: “Mr. Wash SyCip was an inspiration and a guide.”

In the foreword by former SGV chair David Balangue to SyCip’s biography, “Wash: Only a Bookkeeper,” he was described as “any or all of the following: father figure, school principal, mentor, conscience, critic, friend and standard of integrity.”

“Mr. SyCip was a true visionary,” said Jaime Ysmael, president of Ortigas & Co., who started his career as an accountant at SGV.

Ysmael said SyCip’s belief in the Filipino and his passion for education and excellence helped produce some of the best minds in Philippine business.

“Principles like hard work, attention to detail, devotion to client, teamwork that I learned from SGV are the very same principles that guide me today,” said Januario Jesus Gregorio Atencio III, president of 8990 Holdings, who began his career in SGV’s management services division.

SyCip is also known as a philanthropist who was particularly devoted to children’s education.

“He went beyond advocacy and dedicated his time, expertise and income to give the (children) a fighting chance to cross the great divide through basic education,” said Milwida Guevara, founder of Synergeia.

SyCip supported more than 200,000 children by partnering with the Center for Agriculture and Rural Development Mutually Reinforcing Institutions (CARD MRI).

In 1992, SyCip received the Ramon Magsaysay Award for International Understanding.

Sen. Grace Poe called SyCip the sage of our age. “He was a man who radiated intelligence and inspired respect, and while he was of slight physical stature, he towered over all of his contemporaries,” said Poe, who had consulted SyCip.

“Mr. Wash, thank you for your guidance, your compassion and your contributions to the nation. We will cherish your memory and legacy,” she said.

SyCip was a proud product of the Philippine public school system.

He taught at UST while earning his master’s degree. He passed the CPA examination at age 18. He holds a Ph.D. from Columbia University.

His father, China Bank founder Albino, was in the US capital when he was born on June 30, 1921, thus his name.

SyCip was an American passport holder—something that was sometimes pointed out by his critics, some of whom were unappreciative of his governance advice.

But to his many supporters and followers, SyCip’s heart and mind was always Filipino.

“[Wash] says that when he first interviewed me, I asked him, ‘How old are you?’ And he said, ‘Why?’ [And Ongpin supposedly replied] ‘Because I want to know how long before it is I can take over the firm from you,’” Ongpin said, recounting SyCip’s version of their first meeting.

“You know, that’s just not true, but he just thinks it’s true,” Ongpin said, adding he was just a 26-year-old associate then.

“I was in great awe of him. In fact, I was very nervous when he first interviewed me. But, he believed I said that thing, so we just agreed to disagree about that particular fact.”

Later that evening, SyCip repeated the story about the incident as he remembered it: “When I asked him to join, he said, ‘How old are you?’ No one who is joining me asks me, ‘How old are you?’ I told him my age, and then he said, ‘I have a chance to succeed you one day, so when you retire I will take your place and that is the truth.’”

So that disagreement stands to this day.

At the dinner—which, as it turned out, was one of SyCip’s last public events—were former President Joseph Estrada and Senators Sonny Angara, Chiz Escudero, Juan Ponce Enrile and Frank Drilon, and former Sen. Ed Angara.

Key members of the diplomatic corps and the academic community as well as tycoons and bankers were also in attendance.

SyCip, in his speech, expressed to his host and the assembled guests how pleased he was because of the event.

He ended his speech with advice for everyone in the audience: “Seated between Bobby and Ramon Ang reminds me of a Chinese saying that, if you are negotiating and you’re buying, [act as if] you are selling. If you’re selling, [act] as if you are buying.” –With reports from Philip C. Tubeza. Christine O. Avendaño, and Inquirer Research