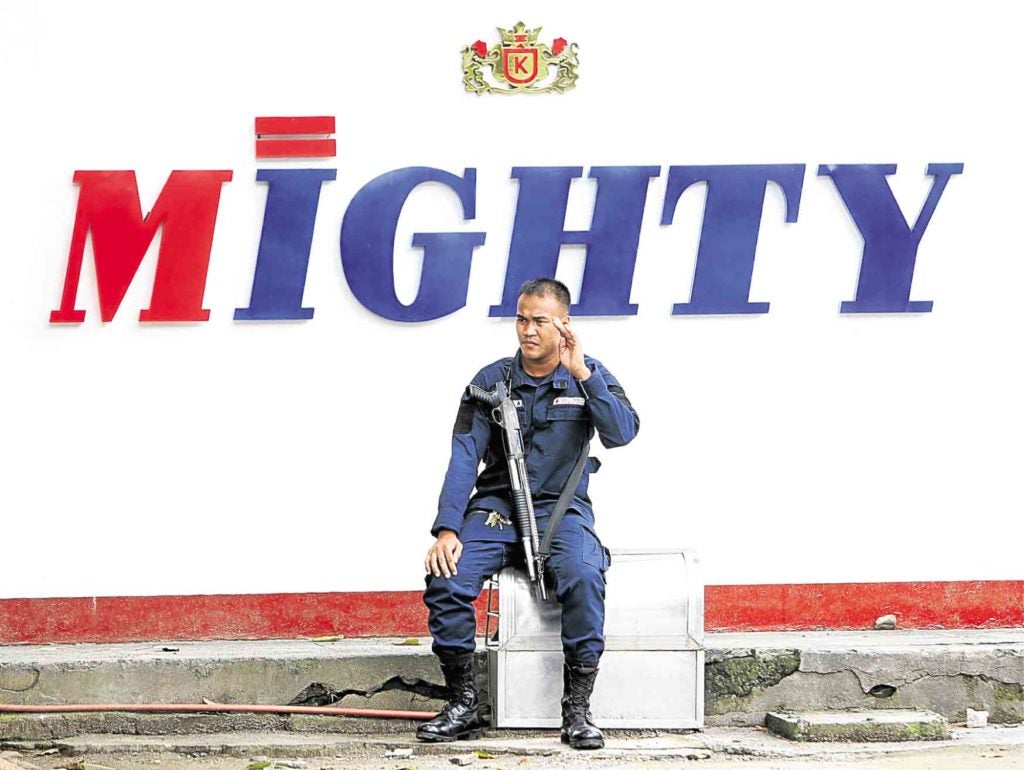 A guard keeps watch outside the Mighty Corp. compound in Makati City on the day the company, facing tax evasion charges, entered into a P40-billion settlement with the government. —LYN RILLON

Mighty Corp. owner Alexander Wongchuking has skirted criminal indictment after he entered into an out-of-court settlement with the Bureau of Internal Revenue (BIR) over the P38-billion tax evasion case filed against him and three other executives of the homegrown cigarette maker.

“Under our tax laws, settling a tax case is allowed. We could consider this case as closed,” Justice Secretary Vitaliano Aguirre II told reporters on Friday.

“The government of the Philippines is now P40 billion richer, including (surcharges),” Aguirre added.

In a joint resolution dated Oct. 2, a three-member panel of DOJ prosecutors headed by Senior Assistant State Prosecutor Sebastian Caponong Jr. granted the Sept. 26 motion of the BIR that sought to withdraw the criminal cases against the officials of Mighty.

The state prosecutors said Section 24 of Republic Act No. 8424, or the National Internal Revenue Code, allowed BIR Chief Caesar Dulay to “compromise, abate and refund or credit taxes, and to compromise criminal violations except those already filed in court or those involving fraud.”

“[Considering] further that the parties to the instant are not opposed to the prayer for the withdrawal of the complaints, it behooves (the DOJ) to grant the motion if only to promote greater interest of the parties involved,” read a portion of the two-page resolution.

President Duterte had earlier threatened to order Wongchuking’s arrest for allegedly avoiding the payment of correct taxes, saying the Mighty owner should pay at least P3 billion to the government.

However in July, President Duterte ordered the finance department to accept a settlement, under which Mighty, which had 23 percent of the local cigarette market, would drop out of the tobacco business.

The company settled the case with a P30-billion payment and paid another P10 billion in taxes and penalties, he explained.

The Japanese firm, whose global brands include Winston and Camel, announced last Aug. 22 that it was purchasing Mighty for P46.8 billion. —WITH A REPORT FROM AFP

Read Next
PH still an attractive place for expats
EDITORS' PICK
Villar Group gears up for AllValue Shopping Party on Dec. 3; around P 1-million promos and discounts up for grabs
Gov’t eyeing COVID-19 vaccine booster for essential workers, indigents by Dec. 10
Gov’t plans to open COVID-19 vaccination for 5- to 11-yr-olds by January 2022
A delightful blessing!
Legarda: Ending Violence Against Women, a cause for all
Omicron variant detected in more countries as scientists race to find answers
MOST READ
Quiboloy warns of ‘much worse than Omicron virus’ if his ‘persecution’ is not stopped
Suspected Omicron cases mild, says leading S. Africa doctor
Bongbong Marcos’ conviction in tax case not a crime involving moral turpitude — lawyer
Marcoleta defends pol ads on ABS-CBN
Don't miss out on the latest news and information.