Market down as profit-taking continues 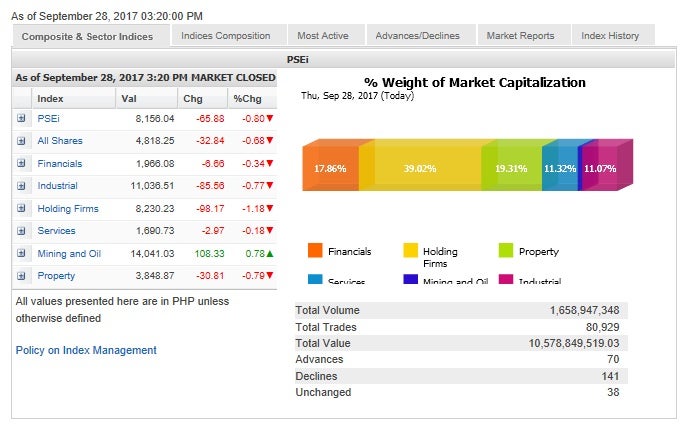 Local stocks returned to the doldrums on Thursday as investors continued to lock up gains from the recent rally to record highs.

“US stocks rose on Wednesday, with both the large-cap S&P 500 and the small-cap Russell 2000 hitting intraday records; financial shares were among the strongest sectors of the day after a leaked tax plan boosted the market. This wasn’t the case for the Philippines, which continued with an exodus of funds as [players] cleaned portfolios right before the end of third quarter 2017,” said Luis Gerardo Limlingan, managing director at Regina Capital Development.

Except for the mining/oil sector, all sub-indices declined, led by the holding firm counter which slipped by 1.18 percent.

Value turnover for the day amounted to P10.58 billion.

The PSEi was weighed down most by Metro Pacific, which fell by 3.25 percent, while JG Summit and Jollibee both slipped by over 2 percent.

Outside of the PSEi basket, there was heavy profit-taking on PXP Energy, which slid by 5.72 percent after surging in previous days due to speculation over a potential China-related exploration deal.

On the other hand, EDC rebounded by 4.43 percent

The block sale involving P64.52 billion worth of EDC shares priced at P7.25 each will be executed on Friday, Sept. 29.

Retailer RRHI, which will join the PSEi by Sept. 28 replacing EDC, rose by 0.51 percent.